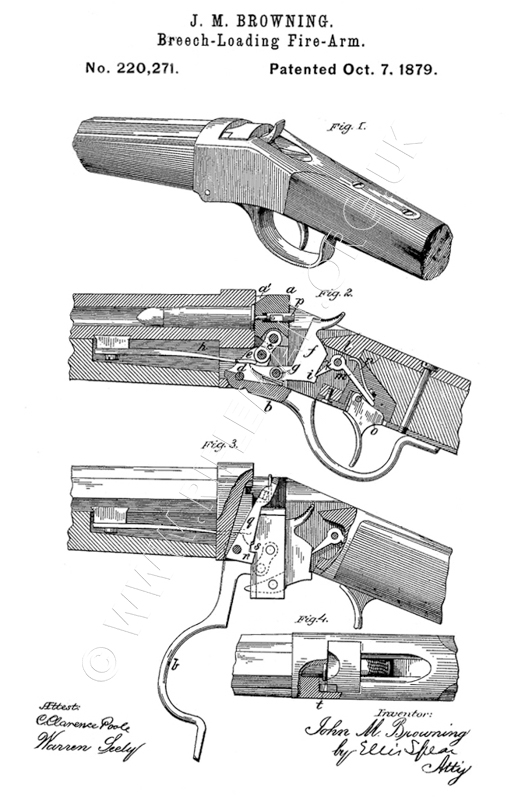 To all whom it may concern:

Be it known that I, JOHN M. BROWNING, of Ogden City, Utah Territory, have invented an Improvement in Breech-Loading Fire-Arms, of which the following is a specification.
My invention relates to breech-loading firearms, and consists in certain details of construction, hereinafter fully described and particularly indicated in the claims, whereby the operating parts are greatly simplified and rendered more durable and certain in their operation.
In the drawings, Figure 1 represents a perspective view of the breech and a part of the stock of my improved gun. Fig.2 represents a longitudinal vertical section of Fig. 1, some of the parts being shown in side elevation. Fig. 3 is a side elevation, the case being partly broken away to show the interior mechanism. Fig. 4 is a top view, some of the parts being broken away to show the position of the cartridge in place and the retractor.
My invention relates particularly to that class of breech-loading fire-arms in which the breech is closed by a vertically-sliding block operated by the guard-lever, and carrying the hammer with it in its motion up and down.
The breech-block a slides vertically within the breech-piece, to which it fits closely, and against which it bears both in front and rear, so that when it is raised it effectually and securely closes the breech of the gun. This breech-piece is moved by the guard-lever b, to which it is connected by the link c, within the slot in the interior of the block. The guard-lever b is pivoted to the breech-frame at slightly in front of the breech-block. The guard is also formed with lugs e e, adapted to fit into the slotted breech-block and to receive between them the link c, to which 'they are connected by a pin, at a point within the slot when the guard is brought into d position for firing. The guard-lever is also so constructed that when it is brought into the position last specified it effectually closes the opening through which the block and the hammer move when the lever is depressed, as in opening the breech.
The hammer f is pivoted to the block at g, within the slot of said block. The tail of the hammer extends through the slot and rests, when the block is raised, under the end of the spring h, which is secured to the barrel, as shown in Figs. 2 and 3.
The breech-piece is slotted to the rear sufficiently to give space for the hammer when at full-cock. The hammer is constructed with an offset at i, against which the dog k bears, when the breech-block is raised, to close the breech. This dog is pivoted at l, and is provided with an arm, m, and a spring n, the latter bearing against the shell in the breech-frame, so as to keep the arm m pressed down against the trigger o. The pressure of the spring n keeps the end of the dog k against the rear edge of the hammer, whether the breech-block be raised, as shown in Fig. 2, or lowered, as shown in Fig. 3. When the guard b is depressed for the purpose of opening the breech of the gun, by means of the links c it draws down the breech-block, carrying with it the hammer f, the hammer being thrown forward in its passage, and the tail of it dropping from contact with the spring h. When the lever is elevated its return movement lifts the breech-block, and with it the hammer; but as the dog k comes in contact with the offset i the rear part of the hammer is arrested in its movement and held in place while the forward part continues to rise, being carried upward by the continued movement of the lever b, so that the hammer is thrown back by the completion of the movement and held at full-cock, resting over the point and on the breech-piece, while in the latter part of the movement the tail of the hammer has come in contact with the spring k, and lifted it sufficiently to bring the strain of the spring upon the tail of the hammer, so as to give a suitable blow upon the firing-pin.
The breech-block is supported when the guard-lever is closed by means of the links and lugs e e, the pivot-pin which connects the said link and lugs being carried into line with the other link-pin and pivot of the guard-lever, or slightly past the dead-point, so as to securely lock the block in closed position.
The firing-pin is of the ordinary construction, and is represented at p. The retractor is shown at q. It is pivoted at the lower left-hand corner in a slot in the breech-piece, and
rests in a recess cut in one side of the breechblock. The shape of the retractor is shown in Fig. 3. At the lower end it has an offset, r, which projects into a groove in the lower part of the breech-block. A projection, s, on the breech-block extending across the upper end of this lower slot strikes the offset r upon the lower end of the retractor when the block is near the limit of its downward motion, and throws the upper end of the retractor back, thus ejecting the empty shell. A stud projecting inwardly upon the retractor, as shown at Fig. 4, rests beneath the angle of the shell, so as to obtain a suitable hold and allow the retractor in its motion to throw out the shell.

The retractor extends upward through its recess in the breech-piece, and the upper end of it is flush with the surface of the latter. This effectually closes the slot in the breech-block against the admission of dirt o r anything which might clog theblock. The breech-block is bevelled at a, in order to push home the cartridge in case it should happen not to be sufficiently pushed forward into its place when the block rises.

I am aware that a breech-block carrying a hammer pivoted upon the block and cocked by upward motion of the said block, in connection with the trigger, is not new.

What I claim as my invention, and desire to secure by Letters Patent of the "United
States, is-

1. In a breech-loading fire-arm, the combination of the slotted breech-block and of the hammer pivoted within the slot with the spring in front of the block, projecting between the lugs e e of the guard-lever and bearing upon the tail of the hammer, and with the link c, connecting they block and guard even as set forth.

2. The combination of the slotted breech-block, the lugs e e, - the link c, and the hammer f, pivoted at g, and extending between the lugs o, to bear against the spring h, as and for the purposes set forth.

3. The dog k, provided with the arm m, resting on the trigger and with the spring n, operating in connection with the rear of the hammer and the offset z, and with the breech-block and spring ii, as and for the purpose set.

For queries relating to the website or rifles shown, email: Miniature-Calibre-Rifles@rifleman.org.uk

Please direct any queries relating to the Leagues to: HARC-MRL@rifleman.org.uk