The Lee-Enfield Rifle C. No.7 (Canadian)

and the TRAINING MANUALS for the rifle

The C. No.7 Rifle is a .22" training version of the No.4 Rifle - manufactured at the Canadian Long Branch factory.

This is not something that we normally do, but it has been apparent, over a number of years,

that our own material is often to be found shared with other sites and forums.

In acceptance of that fact, we feel that others will be happy to share information in return,

and have therefore, where indicated, quoted within this page from an authoritative piece covering this rifle.

Most militaries manufactured or modified their current issue service rifle with a .22 calibre counterpart,

primarily for use on indoor ranges and as a cost saving measure.

In this way, the operating drills could be practiced along with the principles of marksmanship.

Prior to the introduction of the No.4 Mk.1 rifle in Canadian service (Circa 1941/42) the No.2 Mk.IV* rifle served this purpose.

Basically it was a No.1 Mk.III rifle modified to .22 caliber, and, in Canadian service, had a Ross type rear sight attachment.

It’s designator was initially No.7 Mk.1, (not to be confused with the Royal Air Force's Rifle No.7 Mk.1),

which nomenclature was was later amended to C No.7 Mk.1.

The rifle was essentially the same as the No.4 Mk.1*, with a few minor differences.

The newly made (not sleeved) .22 caliber barrel omitted the locking lugs for the bayonet

and the corresponding lugs for the indexing of the front sight assembly, which was pinned into place.

The rear aperture sight was graduated for 20 and 100 yards and had a windage adjustment.

The bolt contained a two-piece firing pin to allow for the offset rimfire required along with an appropriate extractor.

This arrangement was practically identical to that used for many years on British .22RF Lee-Enfield training rifles.

Bolt-heads were available in 6 sizes ranging from 0 to 5. 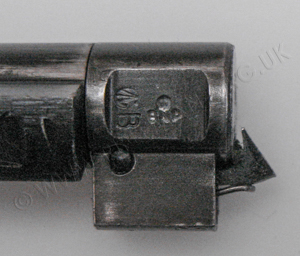 The Canadian "Broad Arrow" within a "C" can clearly be seen, as can the combined letter stamp "LB"for Long Branch.

This rifle has been proofed in the U.K. with the familiar "BNP" mark for British Nitro Proof.

The “22” marked magazine-shell has a platform, in place of the .303 follower,

which acts as a loading guide and allows the fired cartridge-cases to drop into the shell of the magazine.

The Canadian No7. rifle, unlike it’s magazine-fed British counterpart, is a single-shot manually-fed rifle.

A target sling-swivel was a standard fitment, identical to that installed on a No.4T sniping rifle,

and as used by many shooters post-war on their service rifles in target competition.

This was installed just forward of the magazine in place of the king bedding-screw.

An interesting anomaly associated with this target-swivel is that many C No.7 rifles can be found with

the small action cover attaching loop, located between the magazine and the target swivel, missing.

They are likely broken off by the rotation of the target swivel,

(or perhaps removed deliberately to enable the swivel to better work as intended).

for retaining the early Lee-Metford and Enfield magazine on the rifle.

The receivers of the rifles were purpose built for the .22 calibre version.

Besides the different nomenclature on the left sidewall,

that was a unique feature on this rifle; full-bore service rifle sights not being fitted with windage adjustment.

On the LHS rear, the body had a small index mark which would align with the windage graduations on the rear sight cross screw.

On the underside of the Knoxform of the early production (1944) receivers, the numbers "22" would usually be found.

Later receivers omitted this but would usually have a large "1S" stamped under the wrist.

The fore-end wood must be removed from the rifle to view these markings.

Quote:
The nomenclature on the side of the rifles changed during the first 3 years of production.

This marking is referred to in collectors circles as the type 1 marking.

Quote:
During 1945 the nomenclature changed slightly, and was roll stamped (vice the earlier engraving):

This marking is referred to in collectors circles as type 2.

Quote:
Later in 1945 and through to 1946, the marking was slightly changed to what is referred to in collectors circles as the type 3 marking:

Quote:
Interesting variations to the above markings occur when earlier type 1 receivers were upgraded to the later markings.

Sometimes it was done by engraving, and sometimes by stamping. Some examples are:

Initially the rifles were produced in a batch of 20,000 by SAL (which changed to Canadian Arsenals Limited (CAL)

very soon after the war) so serial number rationalization will fall between 0L1 to 0L9999,

Examples of these observed show the serial numbers to be consecutive with the C No.4 Mk.1* rifles then produced,

somewhere in the 9XLXXXX range.

has indicated that he believes many original serial numbers may have been erased by DND in the 50's, and a quantity of rifles renumbered.

Finish on the early 1944 examples are usually a gloss very deep blue/black, while later production rifles were a matt black finish.

During the 1950s, many C No.7 rifles were stripped down into parts by the Canadian military

and the serviceable items were returned in to stores. The receivers were burnished of their serial numbers,

resulting in a slight flat spot in that area, and the finish in the area was touched up.

While some of these receivers will have been used over the years to repair damaged rifles in service,

many more were either sold as surplus or liberated from the DND.

As of year 2000, the DND still held approx 500 receivers in this condition.

Enterprising individuals would often assemble Cno7 rifles from parts, and stamp new serial numbers in to the receivers.

Sometimes they knew enough to use a serial number in the right range of production for the year of receiver,

but quite often the rifles would be serialized to whatever number happened to be on the No4 bolt handle used in the assembly.

Some of these post factory rifles can be found with serial numbers well beyond the 2L0000 mark,

and even with Savage or British numbers stamped in to them.

These “garage workshop” assembled rifles are often lacking in the quality controls which include un-indexed barrels,

As a guide, proper serial number rationalization can be broken up into the following years:

These are certainly a rough guide only, and we have been made aware by a reader of a rifle,

It should perhaps be borne in mind that, while receivers were no doubt dated during manufacture,

serial numbers are likely to have been added later from any series selected.

In fact we hold here an unnumbered new 1946 receiver that has never been fitted to a rifle.

Its bolt, though, is prefixed "1L". Such receivers are about, and could easily be, and probably have been, used to build up 'new' rifles.

One 1946 rifle in our collection, in its transit chest, is outwardly only serial numbered on the woodwork;

the fore-end carries an "OL" prefixed number, but neither the bolt nor the butt-socket are marked.

While the earlier quoted figures exceed annual production numbers quoted by Skennerton in “The Enfield Story”, they will take into account some observed examples of unaltered factory rifles, bearing in mind the likelihood that receiver production exceeded annual assembly.

The “L” in the serial number was for Long Branch, the place where these rifles were produced.

It was the practice for North American Commonwealth arms production, beginning during 1941, that the letter indicated the place of production.

Other letters found on North American made commonwealth firearms include “T” for Toronto (Inglis),

The Cno7s were issued with a wooden chest similar to the no15 sniper rifle chest, but a few inches smaller in height.

Besides the rifle, the chest would contain the items from the Equipment Issue Scale (EIS) no 3023,

which consisted of a cleaning rod with bristle brush attached, a wire brush, a jag, and a loop attachment,

the sling and an oil bottle. The rifle could be issued with any of the 4 available butt sizes and would be marked on the end of the chest.

Originally the chests were painted a matt khaki, but most were repainted and remarked to the semi gloss olive green during the 50s and 60s.

Interestingly, some chests are marked as being just that, while some start their stencilling withthe word "CASE' rather than "CHEST.

Other chests are marked only with various reference numbers, and neither word is used.

Quote:
Most chests will have the makers mark (an intertwined VC) on the right end bottom, along with a date, but often this area has been damaged.

After 60 years, the C No.7 rifle still serves in the Canadian Forces, primarily as a cadet training rifle,

although with the closures of most indoor DND ranges, along with the general anti-gun climate in Canada,

many have been withdrawn from cadet units in the past decade.

In keeping with the Canadian forces policy of disposal of small arms and their components,

the remaining C No.7 rifles in DND inventory are destined for teardown into basic parts

(in support of the Rangers, who still use the No.4 rifles which can use many of the C No.7 parts),

a few to military museums, and the remaining rifles and components will be smelted.

Releases of original rifles are rumored to be of only a couple of batches during the early 1960s,

consisting of 200 or 300 rifles each, along with some individual releases through various unit shooting clubs.

Below: a stripped rifle.

And a closer view of the action components.

(the upper part of which forms the sear engaging with the bent in the cocking-piece).

Careful observation will just afford sight of the two "bumps" resting on the tumbler.

As the trigger is pulled, first one of these protrusions, and then the other, bears on the tumbler.

The 'feel' this lends to the trigger pull is of first one and then another pressure needing to be applied to fire the rifle.

This is how the "two-stage" trigger was designed into the Lee-Enfield rifle.

Previous marques had no protrusions on the trigger lever, and afforded only one long pressure to the trigger "pull".

utilised for the Lee-Metford, Lee-Enfield, and Lee-Speed rifle and carbine over the turn of the Nineteenth to Twentieth Century.

Here, a rotational view of the receiver with and without the bolt in place. 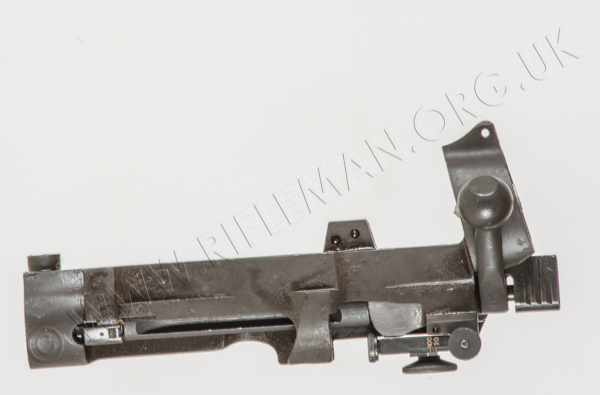 The two No.7 rifles' follow-on, the Rifle No.8, had its own unique adjustable trigger mechanism.

See also the Training Manuals for the C No.7 Rifle,

and the British equivalent to this rifle, the Lee-Enfield Rifle No.7 for the Royal Air Force,