one by an as yet unidentified manufacturer

PERHAPS YOU CAN HELP WITH ITS IDENTIFICATION

or The Buffalo Lebel Training Rifle

This model is by " Manufacture d'Armes Tulle"

It will be noticed that the service Lebel rifle in 8mm calibre has a turn-bolt that rotates through 90 degrees and locks the action with the handle perpendicularly out to the right-hand-side. After the First World War, sporting variants were manufactured with the bolt-handle turned down vertically beside the action. This feature seems to have been incorporated into the Manufrance Lebel-style training and Cadet rifles, possibly because rifles so configured were much more comfortably accommodated by carrying cases, slips or even the occasional saddle holster - with their larger calibre versions. A turned-down bolt handle had already been utilised on the Berthier -Lebel Model 1892, and on some examples of the Model 1907/15.

Bolt locking is achieved by engagement of the single-lugged bolt handle with the rear of the accommodating action cut-out on the right-hand-side.

Click the exploded view below for a higher resolution image

The second of these two Lebel-style training rifles is marked with the name of a manufacturer from Nancy in France. The diminutive mark on the side of the barrel, just above the fore-end in front of the action, is " G. CŒURY - NANCY ", a gunmaker for whom we have been unable to trace any record.

Bolt locking is again achieved by the single-lugged bolt handle engaging with the rear of the accommodating action cut-out on the right-hand-side.

The disassembled main parts of the rifle are shown here

This disassembled parts image illustrates two particular points. Firstly, apart from the external profile of the receiver and the bolt's cocking-piece arrangement, the remainder of the rifle is constructed with parts that appear, to all intents and purposes, identical to parts of the as yet unidentified Nationale training rifle on we show on another page. Secondly, unlike the Nationale Rifle, the fore-end wood is in one piece.

The rear-sight, with its windage adjustment, the barrel, barrel bands and fore-sight are certainly all from the same stable.

The bore of this rifle is in quite good condition for its age, and for the possibly considerable use to which it has been put over those many years; although the muzzle crown has taken something of a beating. 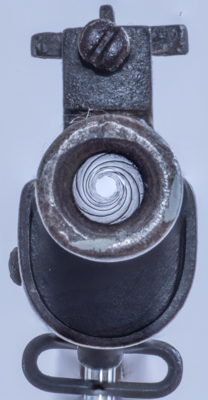 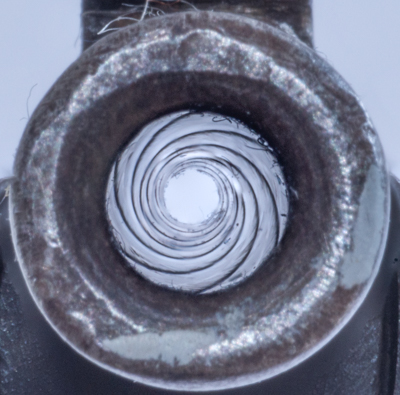 The macro level of these images illustrates that even a modern felt small-bore cleaning system leaves many fine hairs in a bore that is no longer finely polished.

Viewed from the breech end 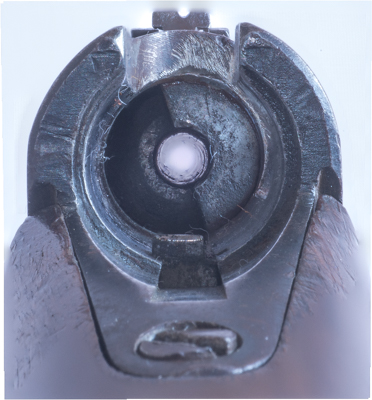 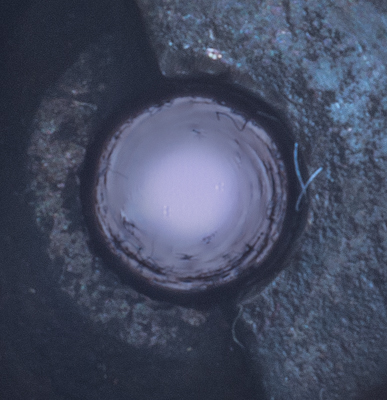 The rather unusual out-of-vertical orientation of the extractor claw is here evident.

See the Measurements table above for dimensions 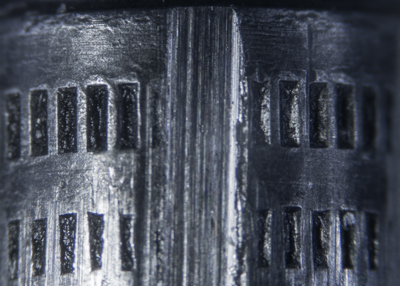 (not this rifle yet)

or The Buffalo Lebel Training Rifle