the SA80 L98A1/A2 GP Cadet Rifles with other training matériel.

IMAGE OF THE SLR WITH "SAWES" SIGHT FITTED

The system was described in brief within the military in a document published ca. 1983 and reproduced below.

"The recent campaign in the Falklands brought home to many of the participants the quantum jump between tactical exercises and combat. This difference is particularly marked in the area of the psychological shock experienced by most human beings when they come under hostile fire for the first time. The realisation that they might actually be wounded or even killed is something to which most servicemen give passing thought when they undertake hazardous occupations connected with their duties.
However, the danger is so much more immediate when the 'crack-thump' of a passing bullet is heard, not from the safety of the butts, but from a shallow fire trench or from behind an all too small clump of grass. This is a problem which has beset those who plan tactical exercises for many years. The use of blanks and pyrotechnics helps to produce some of the realism of actual combat but the soldier knows that he is safe unless he has the bad or good luck to be made a casualty by the arbitrary decision of a nearby umpire.

A partial solution to this problem was discovered by the Royal Armoured Corps some years ago when they introduced the SIMFIRE tank gunnery simulator (made by WESTON-SIMFIRE) into service. The use of these kits enabled the tank gunner's accuracy to be checked and produced an immediate and substantial increase in the interest of the participants. Now the British infantry soldier is to benefit in a similar way, following the introduction into service last year of the Small Arms Weapons Effects Simulator (SAWES), (manufactured by CENTRONIC OPTICAL SYSTEMS LTD).

SAWES consists of two modules; a laser projector and detector harness. The laser-projector replaces the standard SUIT optical sight on the rifle or GPMG, with a slightly larger unit. Inside is a low-powered naked-eye-safe laser which is factory boresighted to the optical axis of the sight and, therefore, needs no zeroing adjustment by the firer. When a blank cartridge is fired, an acoustic detector transmits the firing signature to the laser which emits a brief pulse of coded laser lightout to a range commensurate with the type of weapon. The size of the laser beam is matched to the ballistic accuracy of that weapon, thus requiring the firer to take the same care In aiming as he would have to in order to achieve an equivalent accuracy with live ammunition.

Each soldier who might be susceptible to small-arms fire wears a webbing harness which carries twelve detectors and a microprocessor unit. The harness is unobtrusive and canbeworn over most forms of dress including NBC suits and arctic clothing. The detectors are so arranged that the head and upper torso are vulnerable to incoming fire from all angles. If an incoming pulsed laser beam falls upon the detectors, the microprocessor analyses the signals and informs the wearer eitherthat there has been a'near miss' by emitting a warbling tone for one second, or that he has been hit. If hit, a continuous warbling tone, audible at some distance, is emitted and can only be silenced by the wearer lying flat on his back, effectively removing him from the exercise.

An umpire gun is provided for use by exercise controllers and has three functions. First it is used at the beginning of the exercise (or when required) to verify the correct functioning of the detector harnesses. Secondly, it can be used to 'kill' solders whom the umpire wishes to remove from the exercise; this could be used to represent mines and indirect fire from artillery or mortars. And lastly, it is used to reset harnesses which have been hit. All of these functions can be carried out at ranges of up to 2000 metres.

The whole equipment is designed to withstand the rugged treatment it is likely to receive and, apart from inserting a battery, the soldier has no other adustments to make or switches to operate.The system has been designed so that cheating is extremely difficult. A 'silent-fire' trigger switch can be attached for use in locations where blank firing would not be permitted.

Experience with the equipment so far has shown that it injects into infantry tactical exercises a realism second only to that of actual combat. For the first time, the soldier has to exercise all aspects of fieldcraft, camouflage, concealment and use  of ground in order to survive. In order to win, he has to conserve his ammunition, aim carefully and make each shot count.
The competitive spirit it generates contributes to the interest which former, sometimes dull and much disputed, tactical exercises often failed to arouse. SAWES is now being widely issued to training establishments and as pool equipment. It is hoped to extend the principle of laser-based tactical simulators to infantry weapons, including ATGW, in the not too distant future. Hopefully there will     ultimately be a complete and integrated family of tactical trainers ccovering all aspects ofthe battlefield.

The provisional training pamphlet covering this simulator is being rewritten
and will be issued as a coded item in due course."

The Umpire Rifles, one of which is illustrated below,

About 150 were so modified, but the example in this image

is actually a conversion of a British L1A1 SLR. 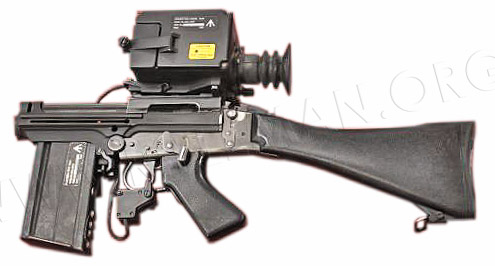 Below: an infantryman wearing the laser signal reflecting harness,

For excercises using the SAWES equipment, blank cartridges were used, and the rifles were therfore fitted with BFA units (Blank Firing Adaptors, or Attachments).

The L1A1 self-loading rifle utilised a number of different BFA devices over its lifetime.

The earlier models were simply designed to reduce barrel emission, and to assist semi-automatic reloading of the lower pressure blank cartridges by increasing barrel pressure to action the rifle. Later models would also act as bullet-stoppers in case a live round was inadvertently loaded. If this occurred with an early unit, the BFA was destroyed, the rifle's flash hider probably also split open, and the gas actioning system badly damaged; with bullet parts leaving the weapon in unknown directions, albeit at comparatively low velocity. Even the later bullet-stopper BFA would not necessarily completely prevent the bullet from leaving the rifle, and the projectile's remains could travel forward 25 yards or so.

From left to right (NTS):

A brochure from the Royal Small Arms Factory showed the types then available.

For anyone wishing to delve more deeply into the subject of the SAWES training system, here is a flip-book facsimile of Section 13 from the 1990 Infantry Training Volume 1 Pamphlet No.2, that deals in detail with the equipment and its usage.

Below: a close-up LHS view of the attachment of the SAWES sight to the top cover of an L1A1 SLR rifle. 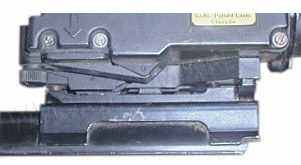 It mounted on the early version of the

Trilux SUIT sight mount cover for the SLR as shown below,

with an adapter plate screwed to the base of the sight unit.

The plate, shown further down the page, is configured with the same locking arrangement

as that of the contemporary standard issue Trilux optical sight.

Below: the trigger unit that plugs into the front of the SAWES sight,

with its cable leading to the trigger component that clamps to the rifle's trigger guard. 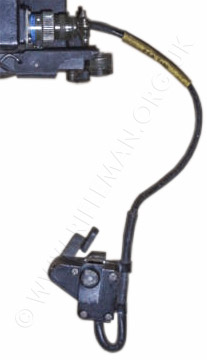 Below: the SAWES sight fitted to the SA80 L85A1 Individual Weapon.

Click image or this link for "3D" Rotational imagery of the rifle in this configuration.

For interest and comparison, here is the L85A1 with its mounted IWS (Individual Weapon Sight).

Click image or this link for "3D" Rotational imagery of the rifle in this configuration.

Further detail of the SAWES sight mounting arrangement for the SLR

An early Trilux SUIT sight mount cover is shown beneath it.

Note that this mount has a cast T-bar, rather than the type that has a rod T-bar with a flat machined on top.

The front of the mount plate also has an inverted chamfer on the forward corners.

The rear of the adapter plate rests on the cover mount T-bar.

Images 5 to 9 show the SA80 mount removed to show where this adapter plate fits.

Note: the T-bar is part of the casting of the mount locking plate.

The spot welding is not pretty, but is original.

The rivets holding the mount onto the top cover

Below: the SAWES sight - inverted - showing the L85A1 SA80 mount that can also be fitted to the sight.

Below: the witness mark for the mount attachment, and the four machine-screw mounting holes.

The SA80 mount base is similar, but not identical to,

the adapter plate that is needed to mount the SAWES sight to an SLR Trilux top cover.

The adapter plate for the SLR has a similar plan view to the SA80 mount's top,

but the tapered edge continues rearward, taking the plate to a little more than the full width of the T-bar on which it rests.

Below: the early Trilux base locking arrangement

that is replicated on the adapter plate.

Three views of the SLR adapter plate that screws under the SAWES unit are shown below.

The later cover mount below has the prefabricated rod T-bar that we have not seen used with the SAWES on the SLR.