A small representation of SMRC Prize Medals and Badges

This page is very much under construction;

such material as there is, is presently just a taster of what is to come.

Note that all Society of Miniature Rifle Clubs awards will have been pre-November 1947,

prior to that year's change of the Society's name to the National Small-bore Rifle Association.

The most often seen of the SMRC medals is that for the Bell Trophy.

This bronze medal is frequently advertised as being rare, which is far from being the case.

In 2005, the NSRA historian and archivist, Brian Woodall, wrote of this competition .......

The Bell Trophy was presented to the SMRC in 1909 by Mr. Chas. R.E. Bell as a challenge trophy for award at a meeting.  The competition was open to any shooter at the meeting for a fee, but those who held The Bell Medal were entitled to take part without entry fee for life. One Bell Medal was given to every club affiliated to the SMRC each year, which could be awarded to a club member on whatever basis the club chose. It was normal for an individual to be awarded the medal only once. A club was required to register the name of the winner with the SMRC and a list of newly-registered winners was published in almost every edition of The Rifleman from 1910 to just after World War 2.

The arrangements continue to this day and the main competition alternates between the NSRA’s Bisley and Scottish Rifle Meetings.

In more recent NSRA times, this is the certificate given to whichever member of each club has won the

"to shoot annually for the Chas. R.E. Bell Challenge Trophy without entrance fee so long as it is offered for competition".

The premiere U.K. National Trophy was, and still is,

that for the Lord Roberts competition held annually during Bisley week.

The cup stands of the order of four feet high. 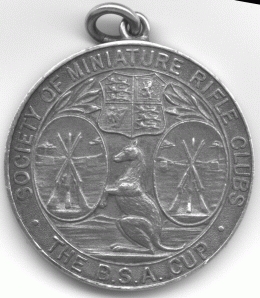 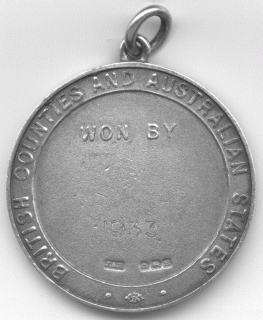 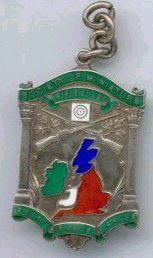 Below is shown the Distinguished Service Medal usually awarded for long service as,

for example Honorary Secretary of an affiliated Rifle Club.

Below: the commemorative competition medal 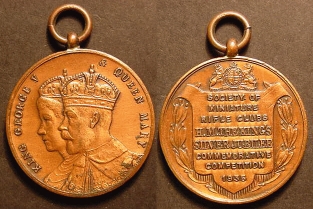 Below are shown just a few badges won by Arthur Traiesin his shooting career,

one of Britain's most successful small-bore competitiors of the Twentieth Century, 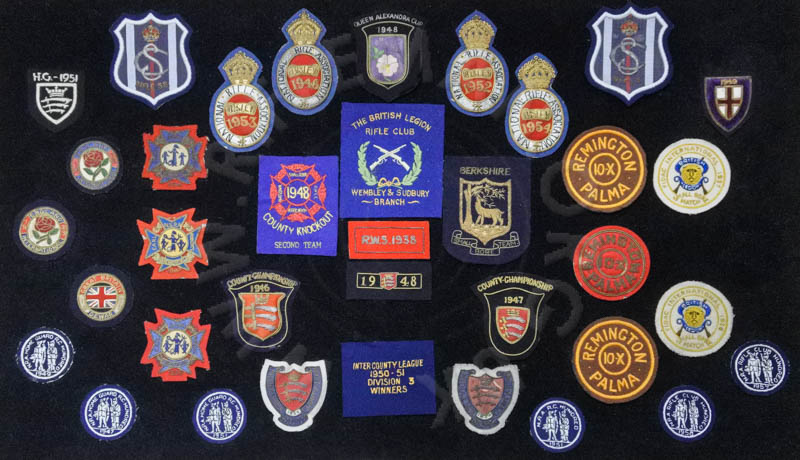