J.G. Anschutz have produced a plethora of high-quality rifle designs over many years,

and manufactured training rifles of various types during, after, and between the two World Wars.

Mauser style training rifles were built in a number of versions by several well-known German manufacturers,

and Anschutz was certainly one of those, although their examples are more rare than most.

We have already covered the ubiquitous Kar98 Mauser training rifle elsewhere, and will not repeat that on this page,

however, Anschutz did make one particularly unusual version, that could be considered as a 'saloon' rifle.

This WW2 period KdF example of what would more usually be a .22RF DSM34

here shown with the loading tool for a 4mm Schutzen saloon rifle.

The rifle is beautifully made, using fine materials everywhere, including the wood furniture, and is very finely finished.

It carries the traditional sling arrangement, and the banding is of true military style.

It is impressive to both view and hold; and shooting it is something of a novelty

Such rifles were used by the NSDAP (German Nationalsozialistische Deutsche Arbeiterpartei),

They were employed in the "Kraft duch Freude" scheme, or "Strength through Joy",

and the organisation arranged travel, holidays and leisure events for the workers,

in an attempt to improve their satisfaction and therefore productiveness.

The rifles were used in "parlour shooting" competition to foster a military ambience.

Below: top of the action is inscribed " Büscher Sportmodell Nürnberg "

Büscher is a German family name stemming from their word for "Thicket" or "Brushwood".

of Jews being sent to concentration camps. He particularly attempted to thwart Schindler's attempts to have

such persons redirected to Schindler's factory, where they could in some degree be protected.

In January 1948 Büscher was sentenced to death in Poland for his war crimes and hanged eighteen months later.

Whether the naming of the model referred to this German officer,

or simply represented, perhaps, intimation of a field rifle, is unclear.

Below: the unusual " J G A "inscription above the Anschutz motif,

again picked out in colour, as were the inscriptions on some of the various DSM 34 type rifles. 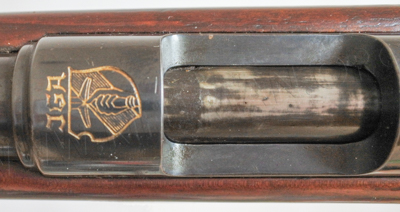 The bolt release lever and safety catch, shown with the bolt open. 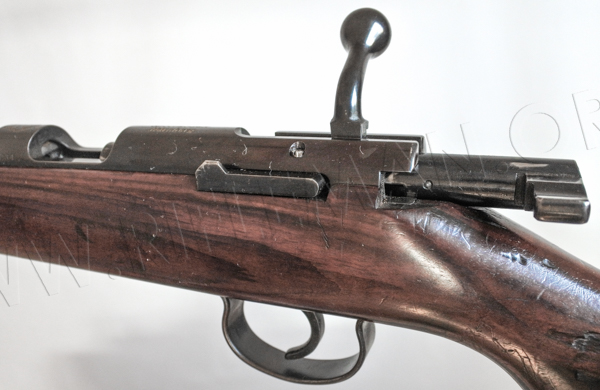 for ranges of from ten to fifty. 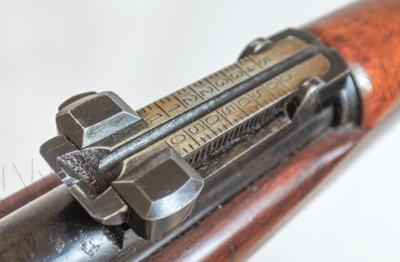 Below: the fore-sight in its file-cut dovetailed ramp, for windage zeroing adjustment.

The barrel is extremely deeply counter-bored, or the 4mm barrel has been sleeved within it,

as the true internal barrel length is only eight inches.

The cleaning rod would certainly best be used from the breech with the bolt removed!

For the most comprehensive record of small-bore Mauser training and sporting rifles,

It is impossible here to ignore the many highly successful .22 rimfire target rifles that have been produced by the company,

although not until the late 1950s, with post war austerity still in evidence, were many small-bore target rifles available in Britain other than the BSA range and the comparatively expensive Winchester 52 and Remington 37 and 40X models imported from the United States of America. Here is an image from an advertisement for the Anschutz 54 rifle in 1958, which "ad" stated that these rifles were being imported into Britain as a result of their International and National competition successes.

By 1962, the now World famous Anschutz SuperMatch had been introduced.

there appeared a need for a purpose built prone rifle 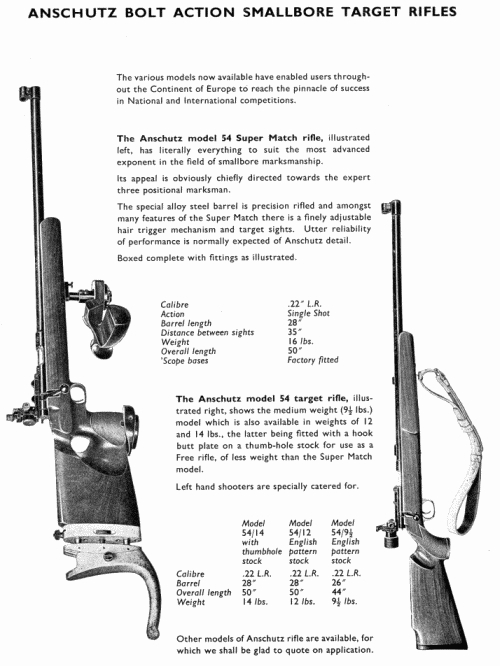 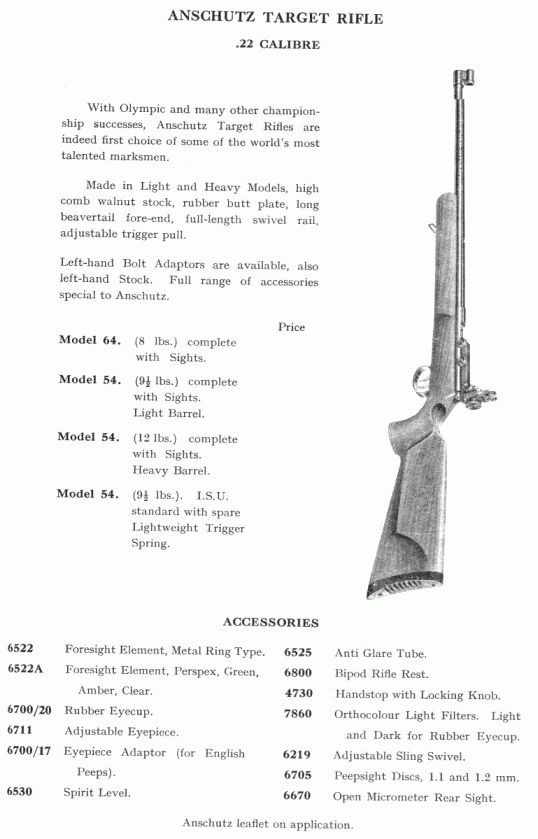 Shown below is a hand-built walnut and steel scale model of an Anschutz Model 1411 - of 1970s vintage.

The rifle is barely 7" long; and the comparative .22 Long Rifle cartridge beneath is near two-thirds scale.

Below is an example of a late 1990s Anschutz SuperMatch rifle, minus its rear-sight, and with the 1411 prone stock,

used for the same round-actioned barrel, underneath for comparison.

From these times, Anschutz never looked back,

their rifles being frequently used to gain success at the highest levels of International competition.

now built by many competing manufacturers.

Wooden stocks are, however, not past their sell-by date.

which has required manufacturers to continue production and development of the traditional rifle. 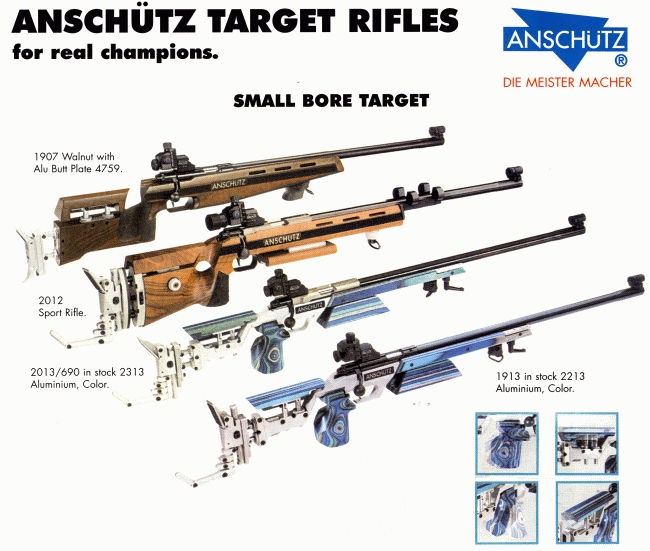 Below are images of a British owned, customised, modern Anschutz.

It has been fitted with walnut furniture, replacing the layer stained multi-coloured laminated furniture supplied with the rifle.

The walnut fore-end, pistol-grip and cheek-piece are each specially shaped to conform with the shooter.

A multi-adjustable "Gemini" butt-plate has replaced the Anschutz original,

and an extension tube is fitted to the barrel to extend the sight-radius for better fore-sight focussing with aged eyes.

The superb adjustability afforded by modern stock design is apparent in the two following images.

as is a degree of patriotism

This rifle is heavily canted for prone shooting.

The rear-sight and fore-sights are therefore rotatable to bring them upright at the selected cant of the rifle.

A spirit level is fitted to the barrel's rear scope mounting block, and visible through the sights,

to ensure a constant rifle and sight angle is maintained to prevent shots falling low either side of the centre-line of the aiming point.

Should you wish to date your Anschutz rifle, the means is available post 1958.

"Up to approx. 1958 only the proof test stamp and the kind of ammunition was imprinted on the barrel.

the last two digits of the referring year were imprinted on the barrel.

Since approx. 1968 the year of manufacture is coded.

The code for determining the age is as follows:

The year of proof testing is described by the last two digits of a year,