Below, the pre-production, or prototype, Model 37 with fore-end barrel-band

image by courtesy of Dave Kern

The early production rifles, between 1937 and 1939, had the barrel band deleted,

and the fore-end wood finished at the point where the band would have been.

The post 1939 production models had the fore-end extended to the length of the rifle in the images below.

the production of civilian target rifles.

It was really not until after 1947 before such rifles became available in either the Unites States or Great Britain.

Remington self-advertised their small-bore target rifles in their own paper "Rifle News" early in 1949. 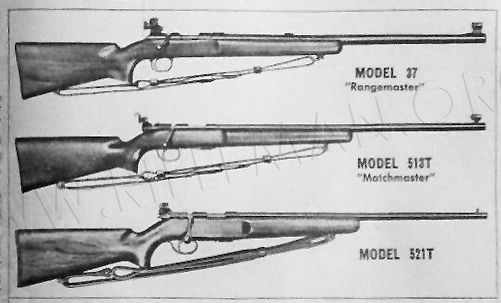 The similarity between the three rifles in the advertisement is marked,

and has occasionally led to some confusion when the rifles have been spoken of by the uninitiated.

At that time, Remington wrote of these rifles, under the article heading

With one of the biggest indoor occasions ever recorded in full tilt,

the word is that Remington match rifles are prominent as ever on the firing lines.

A fine precision instument. Every part, every feature is planned to bring the utmost in hair-line accuracy. The "Miracle Trigger" is a favourite with shooters because of its smooth, sharp, crisp, lightning-fast let-off with no creep or backlash. Its single sighting plane lets you put your cheek against the same identical spot on the stock, no matter what type of sight you use.

A sharp-shooting combination for target or field shooting. Popular priced, extremely easy to handle. The right rifle for the right start, ideally suited to the young rifleman. Self-cocking bolt and double locking lugs provide correct head-spacing. It has a corrugated trigger. And the separate sear provides smooth, crisp pull.

One hesitates to criticise such a successful company's advertising, particularly seventy years on,

but many of the points raised neither differentiate well between the three rifles,

nor bring up what potential purchasers may have seen as the most relevant features.

Some may even consider there to have been an overly obvious element of the blowing of Remington's own trumpet,

but opinions and outlook change with the times.

Below, the later production model 37, famously known as the "Rangemaster".

This particular rifle has been fitted with Parker-Hale target sights,

the rear-sight being specifically made, with its own mounting block,

to fit rifles imported and retailed by that company.

Further down the page we show the standard rifle with its Remington fore-sight and Redfield rear-sight.

The next four images can be rotated and zoomed, either as initially loaded or full-screen for higher definition.

And the rifle fitted with the then popular Unertl telescopic sight. 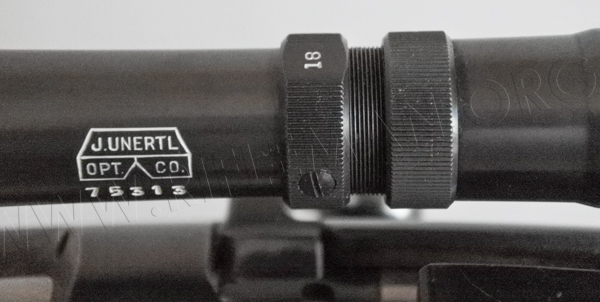 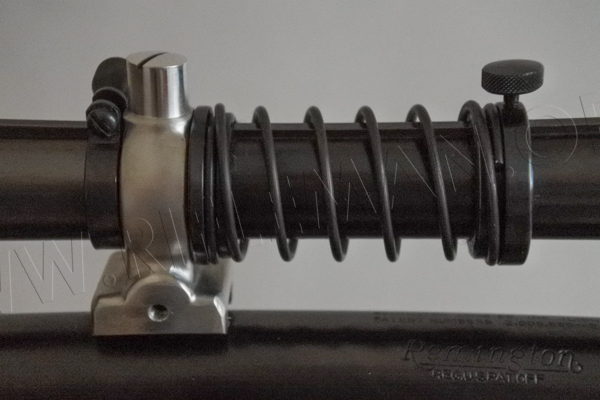 Initially introduced in 1937, and advertised post-WW2 in the Parker-Hale catalogue. 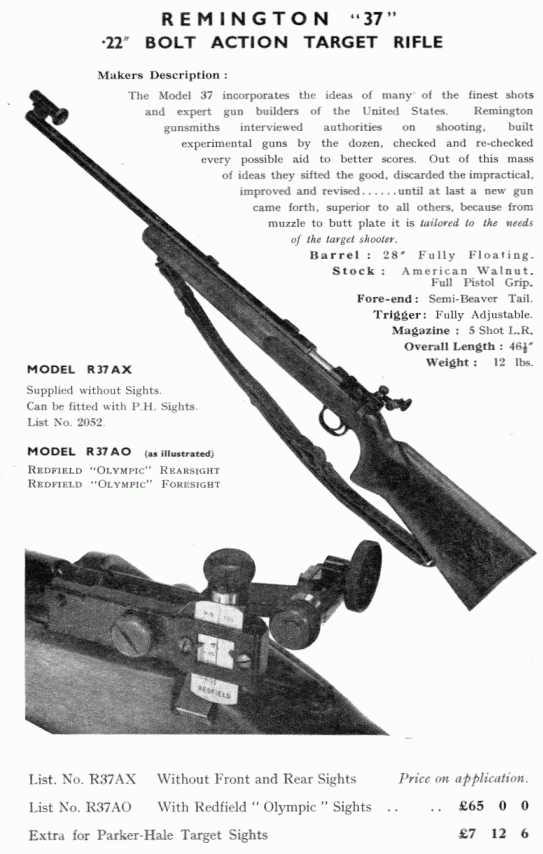 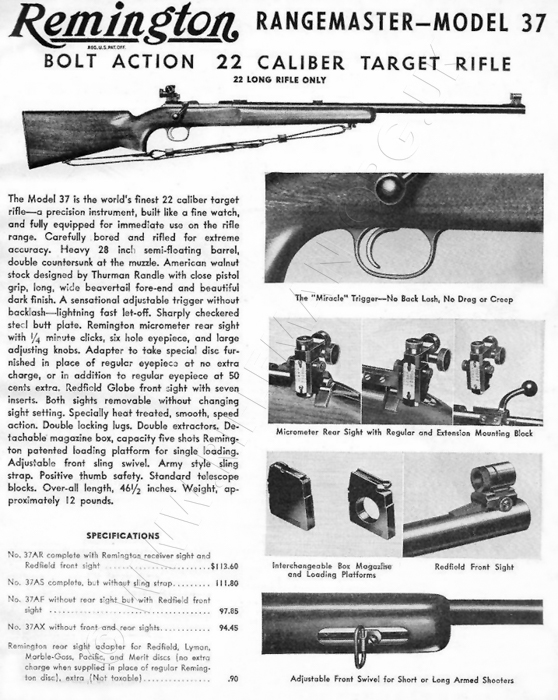 on which the serial number is stamped.

The latter can be used to identify the date of manufacture,

and details for this are to be found online with a simple search. 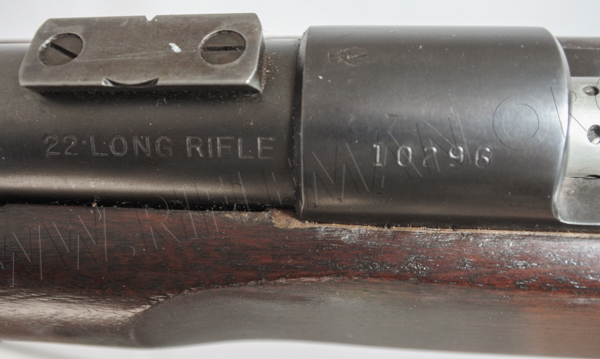 Further forward, the barrel is stamped with the company address,

beneath which lies the company's name logo and

The various inspection and proof marks are on the opposite side to the calibre stamping,

and, in common with rifles brought into the U.K., it carries the requisite stamp

which has been heavily bounced in the striking. 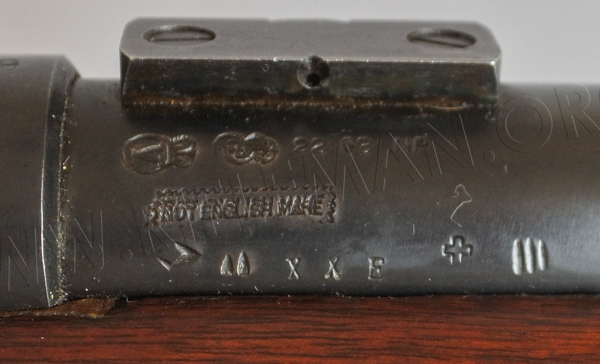 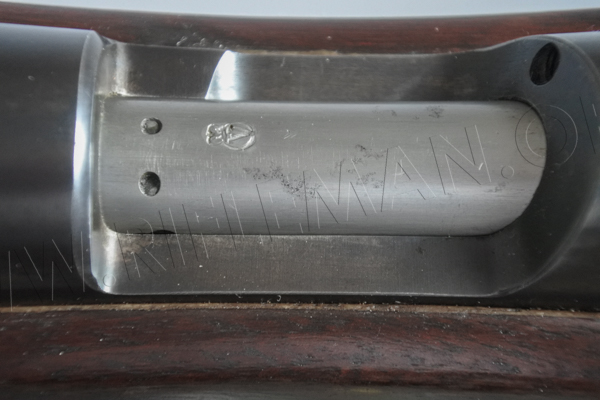 The chamber is shown at the front of the receiver, 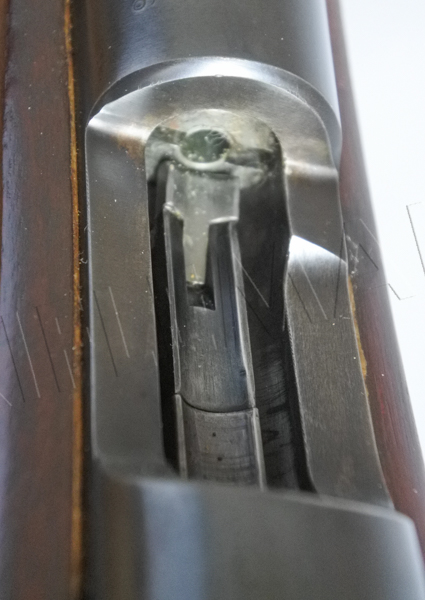 The bolt-head is just visible in the bolt-way at the rear of the receiver,

and pressed down whilst the trigger is pulled

in order that the bolt may be withdrawn. 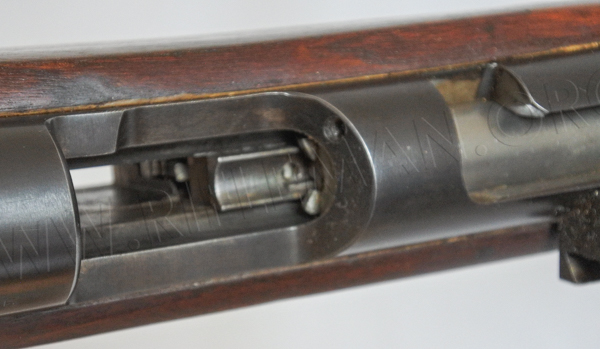 The base of the loading platform insert is flush with the front of the trigger-guard fitting,

as is the press-button for magazine release.

Left below: the unusual fitting under the front of the fore-end is a tell-tale sign

that this rifle was once fitted with an electric bedding system.

Details of a contemporary rifle still so configured can be found

on the page for the BSA Model 15 and Centurion rifles. 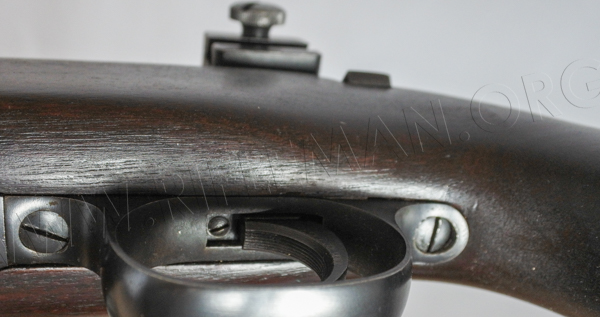 and the safety catch set to 'ON'.

Right: the sear in the bolt-way with the bolt removed. 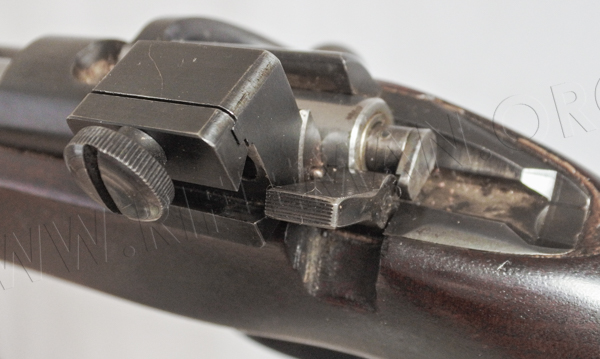 Left, the Parker-Hale tunnel fore-sight, and 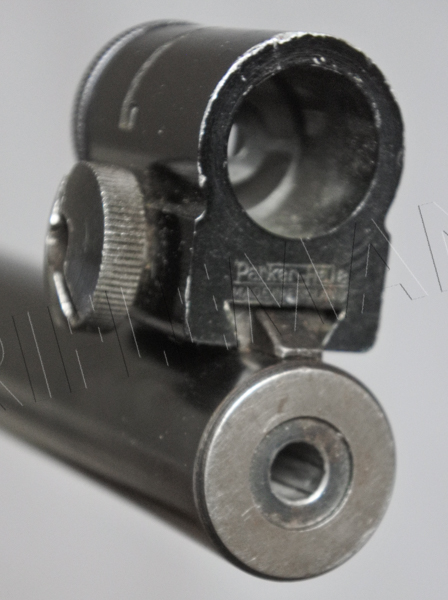 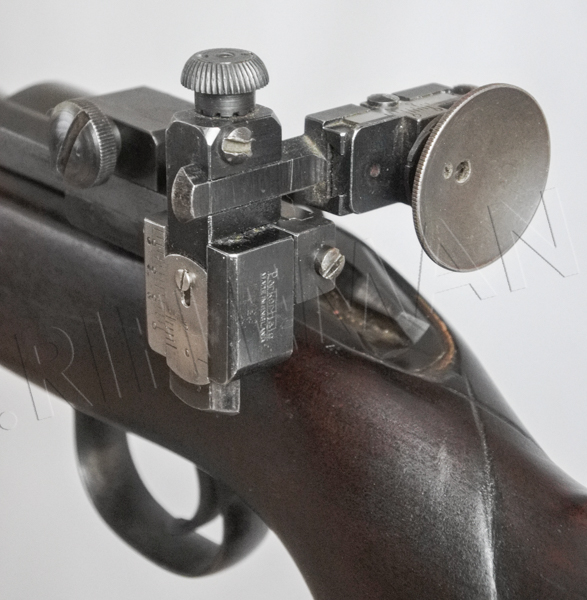 The bolt from below and above

The bolt-head face, showing the extractor and ejection levers. 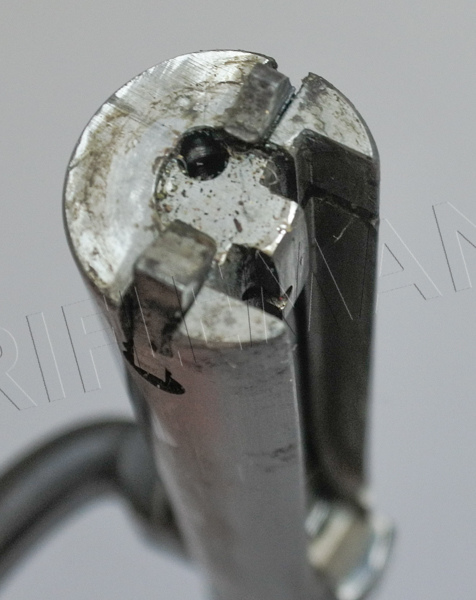 The steel single-loading platform insert that can be interchanged

with Remington's 5-round magazine if so desired.

The spring-poaded ramp at the front of the platform helps guide a round into the chamber,

and is pushed down by the bolt-head on final closing of the bolt. 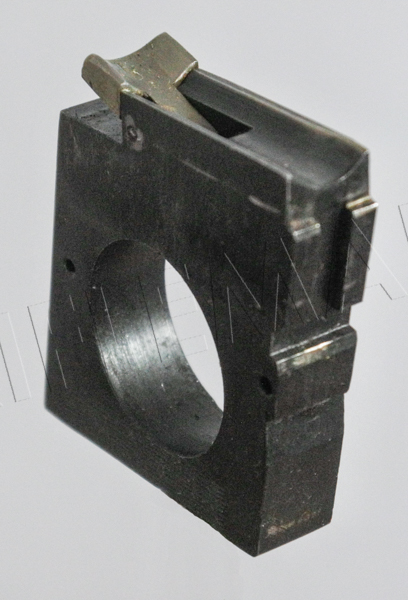 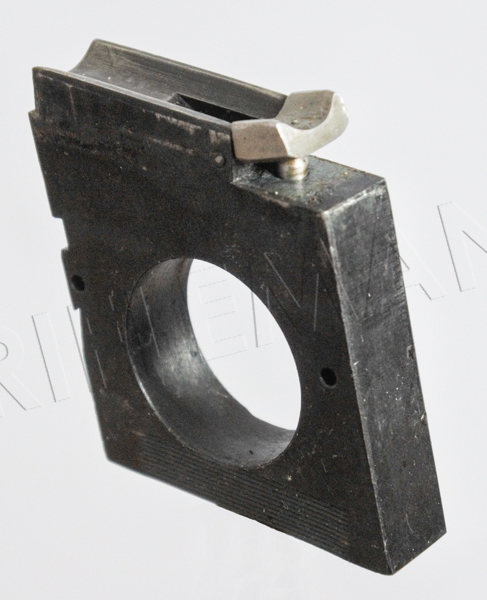 The original purchaser of this rifle had experienced some problems,

and returned it to the National Small-bore Rifle Association,

from whose retail facility it had been bought, for inspection.

The letter-head notes that the N.S.R.A. was formerly the

Society of Miniature Rifle Clubs, which had been renamed 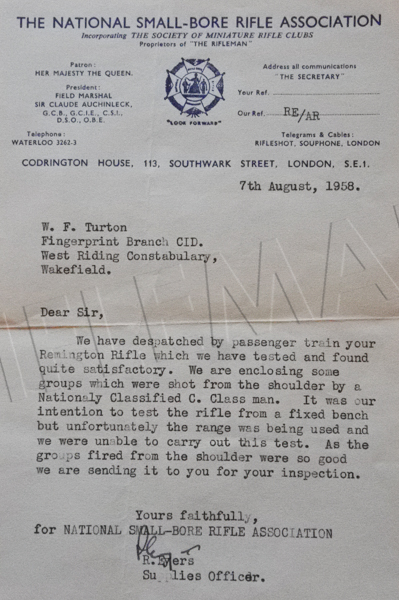 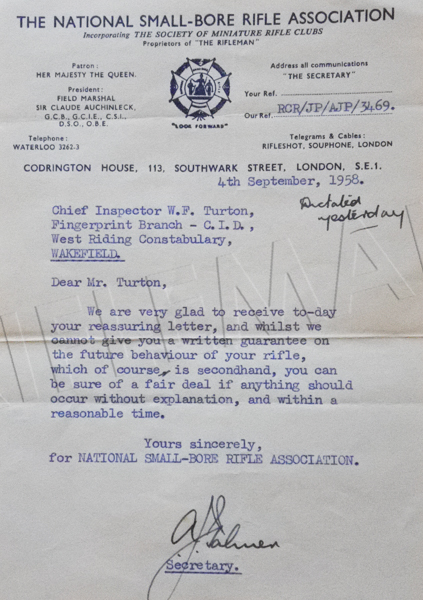 The rifle was returned, with no fault discovered,

and with the test groups shown below to confirm its capability.

The circumstances under which these were shot are explained in the accompanying letter above left.

The owner had obviously then written in reply stating his satisfaction,

as indicated by the N.S.R.A.'s relieved reply on the right,

also making the point that the rifle had , presumably in 1958,

been purchased from the Association second-hand. 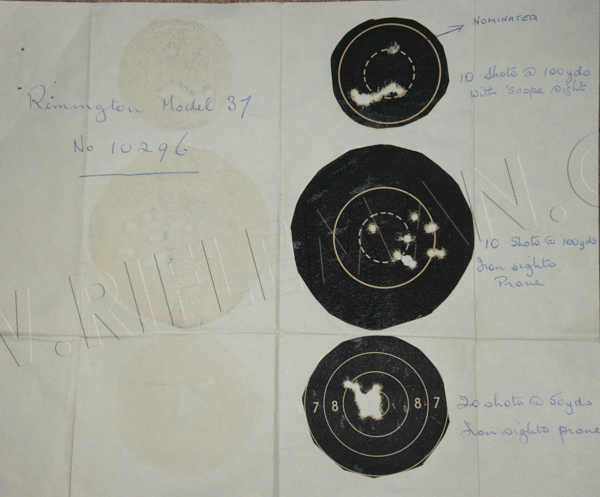 The rifle was resold soon after, as the new owner, who had moved with it to Washington D.C.,

had evidently written to the U.S. National Rifle Association

with a query regarding the disassembly of the bolt.

This is unsurprising, as there was then no internet, and

nowadays there are many searches made enquiring how the bolt should be removed,

let alone how it can be taken apart!

a tool is required to simply remove the bolt! 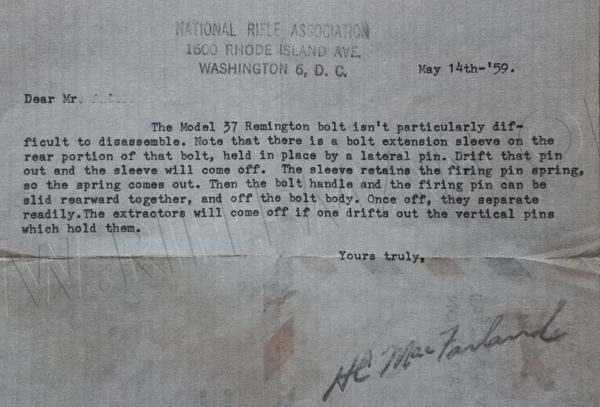 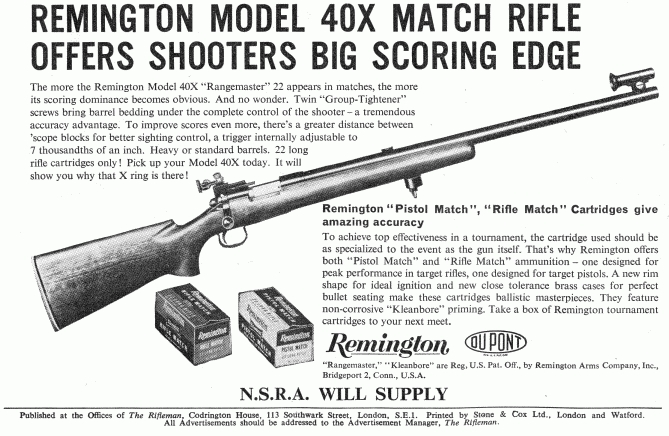 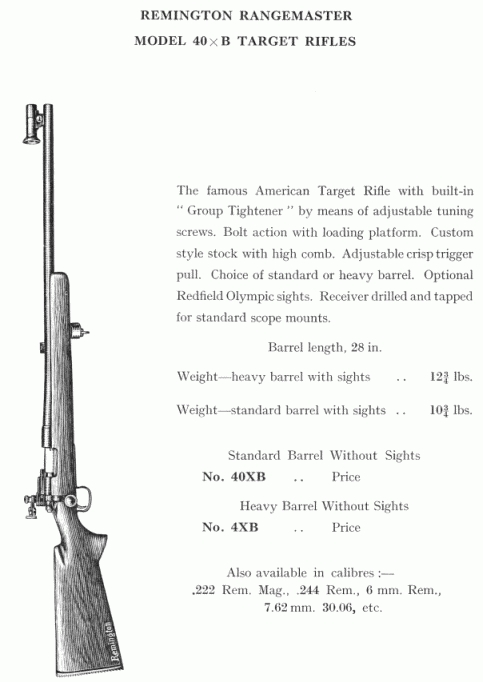 Below are 1963 prices for comparison with other rifles of the day. 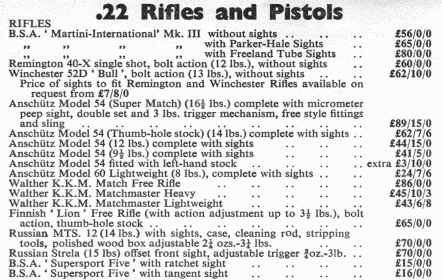 The 40 XB was included in a 1965 write-up of contemporary .22RF target rifles in Guns Review magazine,

along with the BSA Martini International, Winchester 52, Anschutz and Walther equivalents of the day.