The BSA Optical sight for the Lee-Metford/Enfield Long Rifles

The initial patent application for this sight was made on 12th. April 1912. The sight was first advertised in BSA catalogues of that year.

Sights; sighting - accessories. - Consists in mounting the lens 7 of a lens fore sight within a ring 1 by means of two screwed collars 5. The central ring also carries two detachable extension tubes 9 provided with detachable caps 11. The Provisional Specification also describes a modification in which the central ring is formed with a shoulder so that only one screwed collar is necessary.

another design, No. 11,896, was patented by the Birmingham Small Arms Company

almost exactly one year after that war commenced in August of 1914.

Sights ; sighting - accessories. -Consists of an auxiliary lens foresight comprising an outer tube and a lens-carrier, mounted therein, adjustable in the plane of the lens. In the construction shown in Figs. 1, 2, and 4, the lens e is carried by a ring b which is mounted within the outer tube a by three screws b1 radiating from the ring. These screws pass through bayonet-slots a1 in the tube a, and on the outside carry adjusting - nuts b2 Means is provided for locking the nuts, comprising spring arms d pivoted at the rear and held with their front ends engaging the nuts by detents d2. The tube a fits on the ordinary foresight e and is held to the barrel by two clips f, f1 connected by a screwed spindle f2. 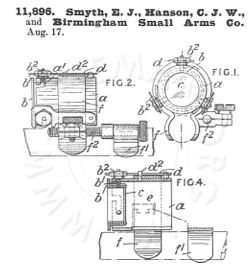 We have yet to see this sight in the flesh, and would be grateful to hear from anyone who has knowledge of it.

which was supplied with threaded steel end-caps not here shown.

The cross-hair and post reticle, akin to that often seen in tubular integral telecopic sights,

is clearly shown with the objective lens in the sight tunnel.

was used as the eyepiece for the Galilean type system,

although without an actual correcting lens, the aperture acting as such.

This particular set-up is mounted on a Metford barrelled Lee-Speed commercial rifle also of BSA manufacture.

Early in the First World War, sniping, or 'sharp-shooting' was often undertaken

by those who in their civilian lives had been target shooters with competition experience.

Many of these men took their own service "volunteer" target rifles to the front,

and one such was John Tippins of Mistley, Essex, a well-known champion shot whose father, Luke Tippins,

was an expert gunsmith who built up some of the most successful service based target rifles of the time.

Below are shown the shooter's view of the sight arrangement,

along with a photograph of the actual sight-picture.