<![endif]-->
YOU ARE VISITING THE U.K. HISTORIC ARMS RESOURCE CENTRE - MINIATURE CALIBRE RIFLES REFERENCE FACILITY
Please be aware that some specialist rotational imagery on these pages may take longer than usual to load
MENU...<.. Should the top navigation menu fail to load immediately please refresh the page or use links ..>.. MENU

The U.S. manufactured Pattern 1914 rifle was designed in the Royal Small Arms Factory at Enfield, but with First World War production of the British S.M.L.E. rifle (Short Magazine Lee-Enfield) already at full capacity, the urgently needed supply of this then new .303-inch calibre weapon was contracted to three U.S. companies - Winchester, Remington and Eddystone. (This rifle design later also became the U.S. Pattern 1917 rifle in 30.06 calibre).

All those rifles converted for use by sniper teams were selected from Winchester production, and telescopes were fitted by a number of British contractors, including the Periscope Prism Company, Purdey and the Birmingham Small Arms Company.,

Early conversions had side-mounted 'scopes, that retained the ability for the rifle to be clip-loaded, and allowed unfettered use of the iron sights. But side-mounted telescopes, such as that shown on the aforementioned P'17 rifle, held a number of major disadvantages over a 'scope mounted directly above the rifle's bore-line. They were uncomfortable to use, with a temptation to use the left eye on an effectively right-handed weapon, and the associated difficulty in resting the cheek on the comb of the butt for a secure and accurate hold. The famous instigator of the WW1 sniping schools, Hesketh-Pritchard, also considered the use of such rifles, necessarily fired in the trenches through the loop-holes of the provided steel armour plates, being far from ideal. The small vertically cut oval slot was well suited to a rifle with an over-bore telescope, but the slot had to be extended sideways to accommodate a side-mounted telescope, leaving the firer at almost double the risk of a hit from return fire.

Any shooter of a telescopically sighted rifle will also be aware of point of impact (POI) problems associated with a sight-line to one side of a rifle's bore, with the effect of any canting error being significantly magnified.

Snipers issued with rifles with side mounted telescopes are also known to have zeroed their sights to the appropriate offset to minimise windage errors at varying distances, a complication nullified when the 'scope is mounted vertically above the bore-line.

The rifle illustrated above is fitted with a Periscope Prism Company manufactured Pattern 1918 telescope, on brackets made to the drawings produced at the RSAF Enfield. 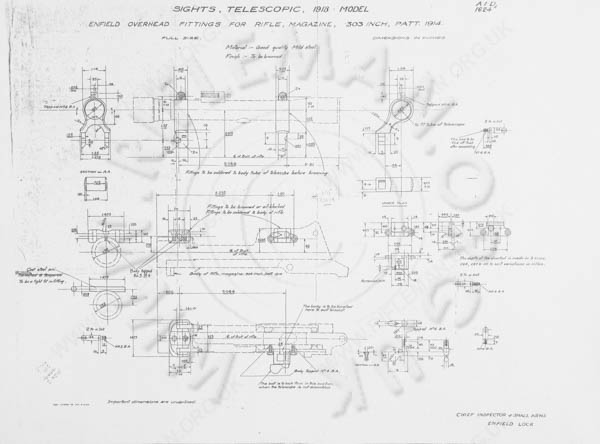 The No.3(T) rifle was built, like its scope and mounts, from the design drawings of the RSAF at Enfield Lock in North London. The main drawing (Ref: S.A.I.D. 2058) is shown below. 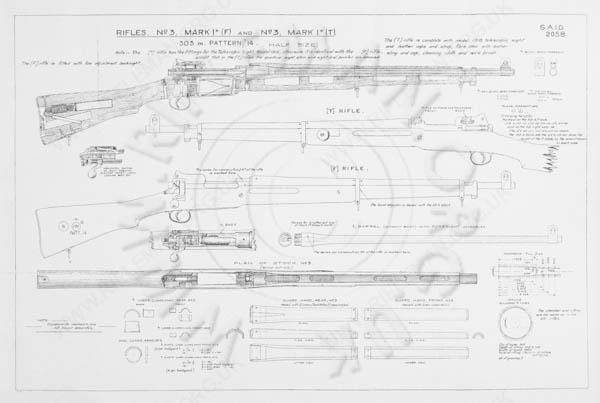 It will be noted that the drawing also includes the Rifle No.3 Mark 1* (F) which is the model without a telescopic sight, but which has been fitted with a now rare and then specially produced folding rear-sight leaf that has been modified with a fine elevation screw in the right-hand-side of the ladder frame. The range adjustment is made using a very small vertically knurled knob, being the only obvious feature different from a standard leaf. The standard sprung manual elevation slide release lever was altered so that its base flange, that locked into the range detents cut into the side of the ladder, now engaged with the threaded elevation screw through a vertical slot milled in the side of the ladder. This sight was also included in the specification for the 'scoped rifle. 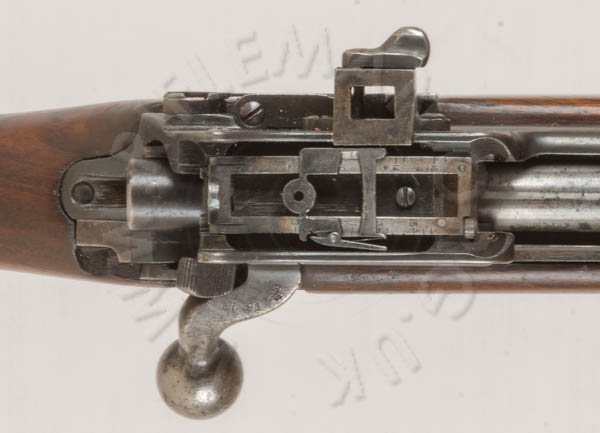 The P14(F) sight, rifle and No.3(T) components are shown on the RSAF Enfield factory drawing ref: S.A.I.D. 2059 in the magnifiable image below. 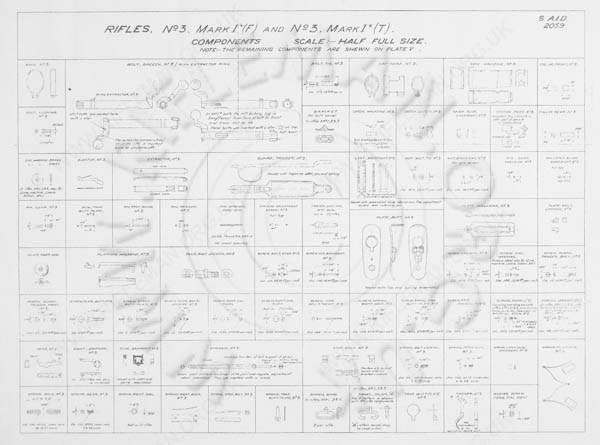 Also read a fascinating contemporary insight into the birth of the .30-06 calibre 'American Enfield' Pattern '17 Rifle.

View an extremely rare British WWI/II sniper version of the P'17 rifle, plus details of the .22RF training conversions of the Enfield Rifle No.3 (P'14) and a .22LR adapter unit, also showing WW2 training video of the rifle; and there is information on the precursor to these rifles, the Enfield Pattern '13 Trials Rifle of .280-inch calibre.