It being impractical to arrange 3D photography at museums such as the National Firearms collection, away from our base studio,

and wishing to illustrate such as the Lee-Enfield .22 No.6 trials/prototype training rifle in an all-round view,

we commissioned a close replication of that rifle utilising many original parts.

This allows sight of the furniture and other aspects not available on the static photos on the original rifle's main page,

as well as investigation of the progression of modifications through the sequence of these .22 Lee-Enfield rifles of the era.

This example differs most obviously in being the short rifle, rather than the long model,

when the No.6 trials models were fitted with a barrel of greater length (22.5")

that was close to the 23.2" that would eventually be used in the following long-serving Rifle No.8.

The rear-sight fitted is as that on the No.5 trials rifle, and therefore

one of the three aspects here not representative of the original No.6 experimental model,

the last being the standard BSA tunnel fore-sight,

rather than the special version used only on the Nos. 5 and 6;

although it is mounted on a similar barrel sleeve to that of the trials rifles.

The provisonal nomenclature of Rifle, .22", No.6, was afforded these rifles

when produced experimentally by the Birmingham Small Arms Company in 1946.

Further information on this unusual situation can be found on the above linked page for that rifle.

The bolt of the .22RF No.6 rifle is unique, being of the same configuration as that of the preceding No.5 trials rifles,

but with the bolt-head lengthened by 11.5mm, and the body correspondingly shortened.

Instead of the 5-round magazine arrangement available with the .22RF No.5 rifle,

the No.6 has an integral sprung single-loading platform.

The No.5 model was also issued with a single-loading option, in the form of a second magazine insert

with a sprung "chute" follower in place of the repeating magazine follower.

With the No.6 trials rifle the complicated and expensive-to-produce magazine arrangement

was dispensed with, the magazine-well being blanked off at the base with a plate

dropped into the trigger guard aperture.

This blanking plate had a modified .303 magazine-follower spring riveted in place,

that spring bearing upwards upon the underside of the single-loading platform.

This platform was comprised of a flat plate with a ramped steel chute rivetted just aft of the rifle's breech,

which plate was depressed below the bolt-way by the underside of the bolt-head when a round was fed into the chamber.

Interestingly, this especially made bolt and head, of singular dimensions,

retained all the features necessary for magazine feeding.

and fit a magazine capable of feeding .22 rimfire cartridges.

In fact, the blanking plate is only held into the trigger-guard magazine-way by virtue of

the spring pressure between its plate and the loading platform.

As can been seen looking at item 20 in the exploded view below,

the plate is prevented from dropping through the aperture by a flat lug at the front,

that would hold a magazine in place. The base-plate and spring can simply be dropped

out of the trigger-guard aperture by lifting the magazine release catch.

At that point, the single-loading platform could be removed, making way for the introduction of a magazine.

Indeed, on testing the proposition, the magazine from a .22 No.5 trials rifle does fit perfectly,

the attendant section and grooving in the bolt head being identical to that of the No.5,

albeit running 11.5mm further back, but this matters not.

The magazine from a R.A.F. Rifle No.7 also fits, although the magazine insert is set further back in the .303 shell.

The difference is about 7mm, and one has to wonder whether the longer bolt-head of the No.6,

that would be necessary to accommodate the difference in bolt travel,

was perhaps a foretelling of the configuration of the No.7 rifle.

On testing, the extra distance between the front of the magazine insert of the No.7 and No.5/6 rifles

made feeding unreliable, and the ejector would need to be modified slightly but,

otherwise, the utilisation of the cheaper to manufacture No.7 magazine

with its modified BSA Sportsman magazine insert would have been quite feasible with this longer bolt-head.

The rifle's furniture closely resembles that eventually used for the Rifle No.8,

in that the butt-stock was afforded a pistol grip, compared with the typical Lee-Enfield

whilst the fore-end had a more triangular section, wider at the base for an improved hand-hold,

with the rifle evidently intended to present as a contemporary target shooting design,

rather than being a pure service rifle emulation. That being the case, the butt-plate

used on the No.8 rifle, rather than the standard brass Lee-Enfield butt-plate with trap.

The No.6 rifle was built on a No.4 Mk.1* type action that had been taken from the production line

prior to the machining of the rear of the receiver to accommodate the regular issue folding rear-sight leaf.

A one-off design of rear-sight was specially manufactured, with the lower windage component

fixed directly to the top of the rear of the receiver body,

of which the side plates had been machined flat for the purpose.

This could not be achieved with our rifle, which instead carries the earlier,

equally unique rear-sight leaf with integral windage adjustment, made for the .22 No.5 trials rifles.

The .22 No.6 experimental rifle, held in the National Firearms collection at the Leeds Royal Armouries,

- which would usually replace the trigger-guard front bedding screw - into the front of the actual trigger guard.

When in place, this would obviously preclude fitment of a magazine.

Whether this was a feature of all those few trials rifles produced we are unsure,

those heavy wood screw-eyes commonly used at that time, and unsympathetically screwed into the fore-end wood.

Another one-off item on these rifles had to be the barrel-band, which needed to be enlarged

to encompass the wider fore-end wood. The fore-end of these trials No.6 models had the slightly widened

lower section, but when that was transposed to the No.8 trials and issue rifles it was widened yet further,

the No.6 stocking being of a configuration all of its own.

It is apparent that many of the features integrated into these trials No.6 rifles

found their way onto the No.8 trials rifles, and thence onto the issue training rifles,

but the main improvements incorporated into the No.8 design

were in the trigger mechanism and bolt arrangement, which can be viewed via the above link.

The bolt of the No.8 rifle was shortened considerably,

with the barrel breech being brought much further back into the receiver,

The trigger arrangement, although much improved on the No.5 and No.6 models by being

hung from the bottom of the action body, rather than being subject to movement in the woodwork

as were the preceding types, was a completely new and fully adjustable mechanism,

thoroughly suited to the potential use of the rifles, beyond that of basic training weapons,

into the realms of competitive target rifles.

Details of these improvements are available via the above associated link

Below is a disassembled view of our No.6 style rifle's ironwork components. 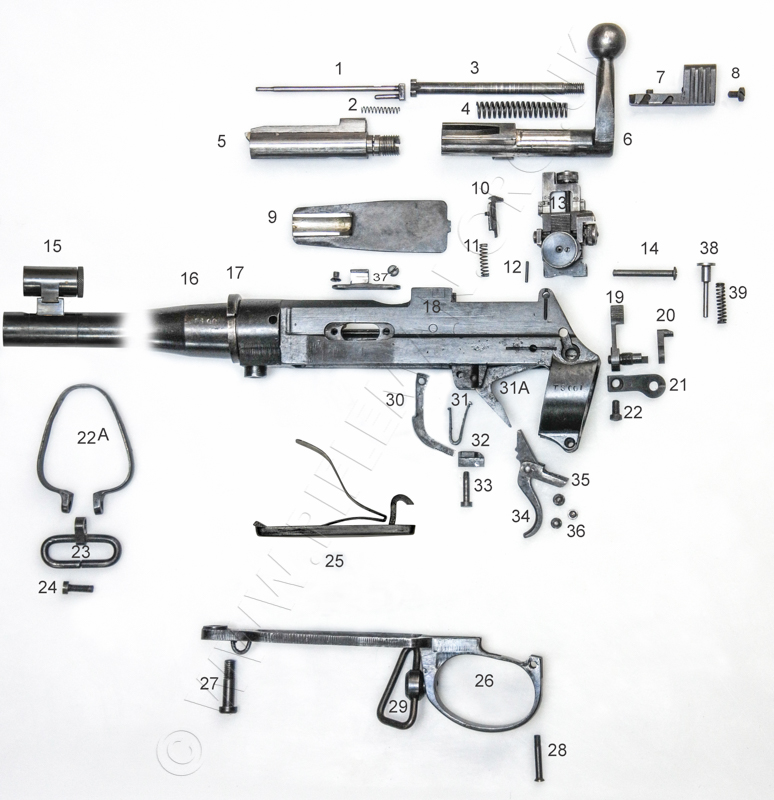 For those further interested in the sequence of these post-WWII trials and training rifles,

see the intervening Lee-Enfield Rifle No.7 in both its British (Royal Air Force) and Canadian forms.