The Lee-Enfield Rifle No.7 (British)

Unusually, we have FOR SALE one of these rifles in a scarce configuration that is duplicated in,
and therefore surplus to, the Rifleman collection.

A .22" training version of the No.4 Rifle Manufactured by the Birmingham Small Arms Co.

for the Royal Air Force

The pattern having been adopted in 1948, the Birmingham Small Arms Co. manufactured 2,500 of a new .22" training version of the No.4 Rifle for Royal Air Force and R.A.F. Regiment use.

It was fitted with a solid barrel, and a specially produced long bolt head. A standard No.4 magazine had the spring and loading platform removed and a plate riveted into the top with a slot and channel to hold a modified BSA Sportsman five round .22" magazine. This magazine, which in its original utilisation was fitted into the rifle from below, was now inserted from the top by the simple expedient of inverting its locking clip and spring in their box section at the rear of the unit.

This differed from the Canadian manufactured C No.7 in which the magazine was fitted only with a single loading platform.

The bolt and bolt-head of the C No.7 rifle were, to all intents and purposes, identical to those of the No.9 rifle.

The left hand side of the receiver of the

British rifle is lightly stamped "No. 7 Mk.I" below which is milled the slot for the ejector

plate. It can be seen below that a spring steel auxiliary extractor is fitted in a slot machined in the left hand side of the bolt head. This has a curved lead (see Images below and bolt comparisons) which rides over the cartridge rim when the bolt is closed, and holds the fired case in position against the extractor until the bolt face comes back to the ejector plate whence the case is plucked out of its grip.

One other magazine type was used in the No.7 rifle. Its raison d'être is presently not fully known to us, but it is a single-shot version carrying a Royal Air Force part number "7B/1061/M" electro-pencilled on its base. We hope to soon discover its true origins, but suspect that because of the quite roughly ......machined loading-platform and rather crude trimming of the upper periphery of the magazine shell, on the two examples we have seen, it may well have been an on-station unit armourer's modification using in-house parts made centrally. It certainly does not appear to be of the quality expected from a BSA factory manufactured item. It is possible that these magazines were produced to meet a certain training requirement or, more likely, to cover a deficit of the original units, since the BSA insert magazine can be fairly easily damaged by rough handling or heavy-handed bolt use when a live round or fired case escapes into the 'works' in the well around the insert.

that preceded the No.7 rifle

the .22 training versions for magazine-fed rifles proved less reliable than their parental counterparts.

The No.7's auxiliary extractor was neither used on the earlier No.5 trials rifle, nor carried forward to the No.8 rifle production. However, in order to reduce the bolt travel of the new No.8 trainer, which was intended to double-up as a target rifle, the bolt head was shortened and the barrel brought back into the receiver a further one and a quarter inches. A further concession to target shooting was that, unlike the No.7 and preceding bolt designs which cocked as the bolt was closed, the No.8 cocked on opening.

On the example of the No.7 Rifle shown above, the left hand side of the butt socket carries the serial number "BS 0341" and the right hand side only the

broad arrow and crown stamp of military acceptance. The magazine carries no marking at all. The rear sight fitted to this rifle uses the standard No.4 leaf graduated for 25,50 and 100 yds, with the additional marking "H" high on the left hand side at the rear. When set at this position, the rifle was said to be "Harmonised". This elevation raised the point of impact by 27" at 25 yards, and was for use with the Landscape training targetry. It has been suggested that the 'harmonisation sight' was not an original standard fitment, however, many of these rifles are so configured and it is by no means certain that either the specification did not change at some point during the production period, or that many rifles were not retro-fitted with this sight.

The barrel was an especially made

the bayonet lugs still in place.

There were probably no more than five BSA manufactured

prototypes of the No.7 Rifle, produced with beech stocking.

On the left hand receiver side plate, these rifles bore the designation

highest serial number so far seen, was simply stamped "No.5" .

View the page for the

The 21st. Century prices for such rifles have increased by a factor of around 25, or even more for a pristine original example of the more scarce magazine-fed Royal Air Force issue No.7. The high value has resulted in a number of rifles, of both marks, being built up from a mixture of spares and re-manufactured parts. Caveat Emptor!

It should be noted that, in 1962, the then more up-to-date Enfield No.8 rifle was described as "unobtainable".

As a result of enquiries and requests made of the editor,

here are 16 Images showing detail of the No.7 bolt head;

and below those, detail of the magazine.

Beware the scales, which provide only a rough guide.

The main extractor pin is too tight to punch out without damage, hopefully enough information for the extractor will be evident when dimensions follow. 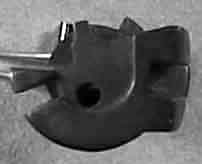 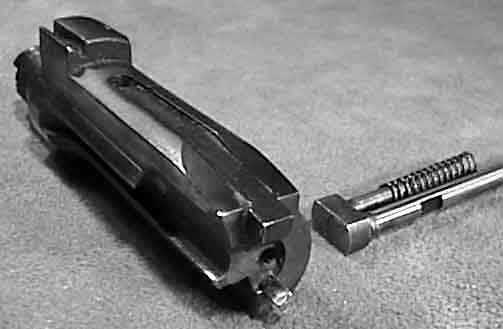 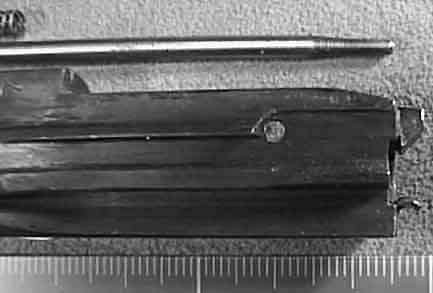 Top: the No.7 magazine outer case with rivetted plate to accommodate the insert 5 round .22RF magazine

For use in the No.7, the release lever is fitted the other way up, and its fulchrum rivet requires removal, from where it is shown on the left hand image, to where its drilled hole is shown on the centre image. The original rivet hole is removed when the necessary trimming of the case side-plates is undertaken. When the lever and spring are refitted inverted in the case, the release is then at the top of the magazine where it is accessible above the mounting plate in the No.4 magazine shell.

Lower right: An original No.7 insert, partly disassembled, for comparison