and one of his pistols

Below, are images of rifle serial no.4, identified as "Unique" by the fine hand engraving on the top at the rear of the action body.

These rifles were manufactured by the late Dr. M.K. Jurek, more commonly known for his target pistol designs

and as co-designer of an automatic pistol in his time with Webley & Scott.

We are uncertain why the term Unique was employed on Dr. Jurek's rifles, but we are not aware that there is a connection with the rather more well-known Unique rifles.

The rifle here shown has an unusual almost straight-pull toggle-action similar to that of a Luger pistol turned on its side. The system is quite effective when operating properly.

There are believed to have been only 19 of these .22RF target rifles made. The whereabouts are known of Nos. 3,4,5, & 6, each being of the toggle-action type. We are also aware of just two of what were understood to be only four turning-bolt actioned rifles Jurek produced, the latter with the unusual facility for fitting the bolt handle to either side of the action, which is slotted to receive it on both sides; a truly ambidextrous rifle.

Of the four known early toggle-action examples, each has variations in the machining of the action or barrel, and of the wood furniture.

The accuracy of these barrels, when in good condition, is not in doubt. One recently shot comfortably in the high nineties on a current NSRA short range (1989) target

The rifles are both very rare and eligible for the Post-Veteran Class in the HARC Postal Leagues.

Jurek's workshop's address, at the time these rifles were produced in the early 1960s, was

along with his "MJK" motif.

Much of this area of the Birmingham Gun Quarter has been demolished and redeveloped; however, 10, St. Mary's Row still stands, occupied by a hairdressing business, adjacent to where W.W. Greener's extensive factory once stood.

The significant outward difference in design between the earlier action body of rifle No.4 and the later No.5, previously illustrated, is clear to see. The initially very square finish was heavily chamfered on the later rifles, no doubt to improve both the aesthetics and handling, although a modest weight reduction would also have been effected.

Shown below are two images of the bolt toggle arrangement, open and closed.

Below: images of Jurek .22RF target rifle serial no. 5

Below, the Chamfered receiver top is clearly seen, along with the special rearsight.

The toggle action is open, with the "bolt handle" pulled rearwards.

The next rifle is serial numbered "9"

This rifle still has its original fitment palm rest for standing competition - shown underneath - and a specially made alternative mount for the rear sight dovetail. This mount carries a rear dovetail block to which a Freeland type tube rear-sight can be fitted.

The foresight is a standard BSA Martini International sight, the barrel mount for which will also take the Freeland fore-sight tube that pairs with the tube rear-sight.

It can be seen that the receiver top has been chamfered even more heavily that rifle no. 5

and that the rifle is capable of being loaded from either side is evidenced by the symetrical cut-outs each side of the bolt body.

We have been made aware that toggle-actioned rifle No.10 has recently been sold out of a well-known London auction house.

This rifle appears to differ little from its immediate predecessors, and is shown below

The example shown is set up for left-handed use, and carries serial number 18.

The bolt handle and rear-sight components are symetrically machined. This permits reversal of each item between hands.

The rear of the round section receiver is slotted on either side for the bolt handle, which can be removed from the bolt body by slackening a single hexagon allen cap-head machine-screw.

Such Allen screws will be seen on many of Dr. Jurek's guns, usually with the cap-heads recessed in counter-bores for neatness.

The rifle cocks on rotating closure of the bolt handle, in the same way as does the Lee-Enfield Rifle No.8.

Jurek sometimes made his own rearsights for these rifles, although he also modified variants of the No.25 model Parker-Hale sight usually fitted to the BSA Martini International rifles

The foresight used was often the Parker-Hale model also fitted to the BSA Martini International.

Below are two images of Dr. Jurek's own rearsight fitted to the bolt-action target rifle that is here under discussion. 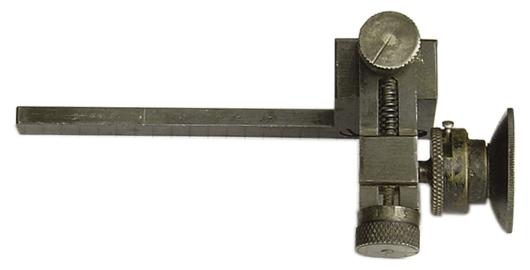 Jurecks cartouche, familiar to owners of his rifles or pistols, is stamped above the fairly basic vernier graduated elevation scale 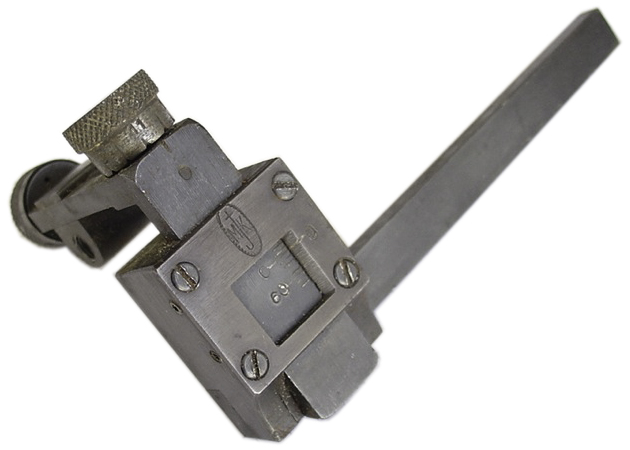 Close examination of this rifle shows that, whilst the action is ambidextrous, the stock is not. There is no cut-out in the woodwork for the bolt-handle on the right hand side, initially suggesting that perhaps the stock had been changed by an owner wishing a pure left-hand stock. However, the rifle was almost certainly ordered direct from Dr. Jurek in this configuration, in view of the facts that the ebony style fore-end cap is very similar to that used on other rifles by Dr. Jurek, and that the action of this rifle is marked specifically "FOR J.L. SCOLTOCK" beneath the address.

This rifle carries the serial No.18, along with the later address for Jurek's workshops at 180, Bradford Street Birmingham, where he was based between 1965 and 1974; although, oddly, it has come to light that there is another similar ambidextrous bolt-action rifle, also Serial No.18, by Jurek, but that example is stamped with the earlier address at 10/11 St. Mary's Row. The stock of this latter rifle has cut-outs for the bolt-handle on both sides, but does not have the ebony-like fore-end cap of the rifle here illustrated.

We have been afforded the opportunity to photograph one of Dr. Jurek's free pistols. We show this single-shot .22 rimfire model as a matter of interest. Jurek mad in excess of three hundred pistols, mainly single-shot, but including various centre-fire calibres such as .38" also used in free-pistol competition.

Below is a trial "Rotate & Zoom" image of the pistol.

When the imagery is shown as loaded, use a scroll-wheel to rotate it, or click and slide your cursor left & right across the image. Click the magnifier on the image to show a high-resolution picture of the chosen position. The arrow icon at the top right will take the image full-screen, where the same controls apply. 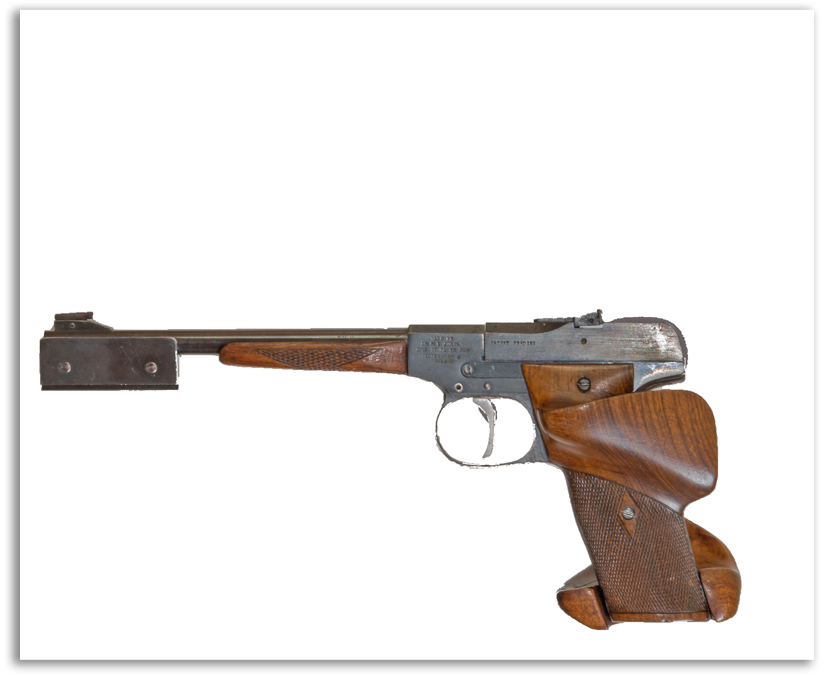 Zooming into the images showing the pistol from above, it will be seen that the Serial stamped on the receiver is "No. 25". Dr. Jurek's personal stamp is also there in the form of "MJK" within an oval cartouche. This stamp was used on almost all of his products, often including any of his specially manufactured rifle sights.

Some still images of the pistol and action are shown below. 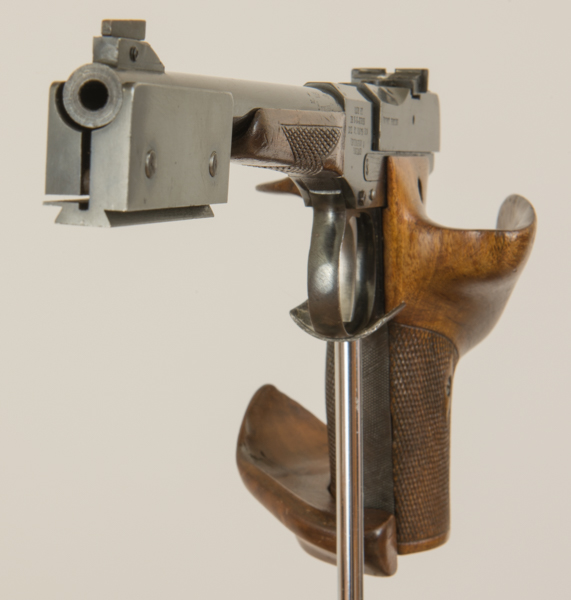 A close-up of the markings illustrates that Dr. Jurek may perhaps not himself have been an accomplished engraver, or he preferred to stamp the required information himself to save the time and/or expense that must have been expended on a few of his products; notably Rifle No.4 at the top of this page. 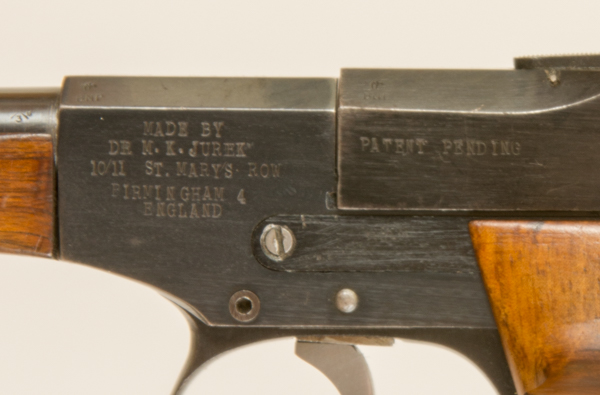 Below can be seen the simple slide action.

This pistol is built as a right-hander, and, without altering the grip, the left hand could be held above the action, and the left thumb used to depress the spring-loaded slide release lever (shown on the RHS of the action) before pulling the slide rearwards to extract the fired cartridge case prior to reloading. Simple but effective ......... and trouble-free. 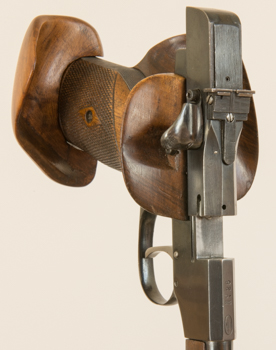 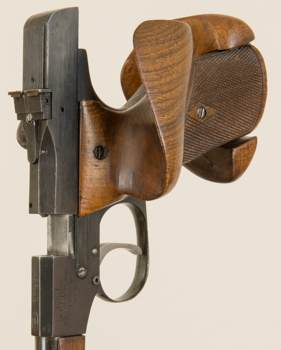