BSA (and other) SMALL-BORE TARGET RIFLES

Including equivalent Target Rifles of major competing British manufacturers,
with just a small representation of significant Foreign Competitors
See also a Quick Comparison and Reference page for all on-site Target Rifles
Or a Simple Identification Table for BSA Manufactured Small-bore Rifles
Go here if you are seeking Spares for your small-bore B.S.A. rifle

NEW ENTHUSIASTS SHOULD BEST START WITH THE MODEL No.4 FOR BEGINNERS BRIEFING

BSA Models No.15 and Centurion

OTHER BRITISH or COMMONWEALTH MANUFACTURERS

was not limited to those shooting !

The manufacturers were every bit as competitive! See the advertisements - left and right.

What other rifles were available to the target rifleman, for his sport, to compare with BSA products? We provide just brief mentions of the main worthy foreign competition to the Martini International series and earlier marques of BSA rifle.

The Feinwerkbau - under construction

The Unique - under construction

For the uninitiated, below are shown diagrams of two types of small-bore target rifle with their common usage part names

THE FIRST DIAGRAM IS OF A TWO-PIECE STOCKED RIFLE

such as THE BSA INTERNATIONAL 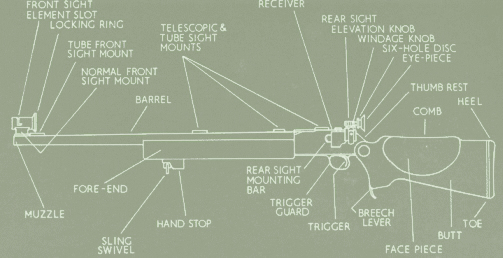 THE SECOND IS OF A ONE-PIECE STOCKED RIFLE

While you are on site, visit the pages on