The L42A1 is a NATO calibre conversion of the famous British Rifle No.4 (T) [for telescoped] sniping rifle of WWII.

those .303 inch calibre rifles that had given such sterling service throughout the Second World War

were rebarrelled with hammer forged 7.62mm heavy barrels that had been developed for target rifles.

Firstly, the L42A1 with its L1A1 No.32 metrically calibrated telescope

The No.32 telescopic sights of the No.4(T) rifles were updated in refurbishment and recalibrated in metres, 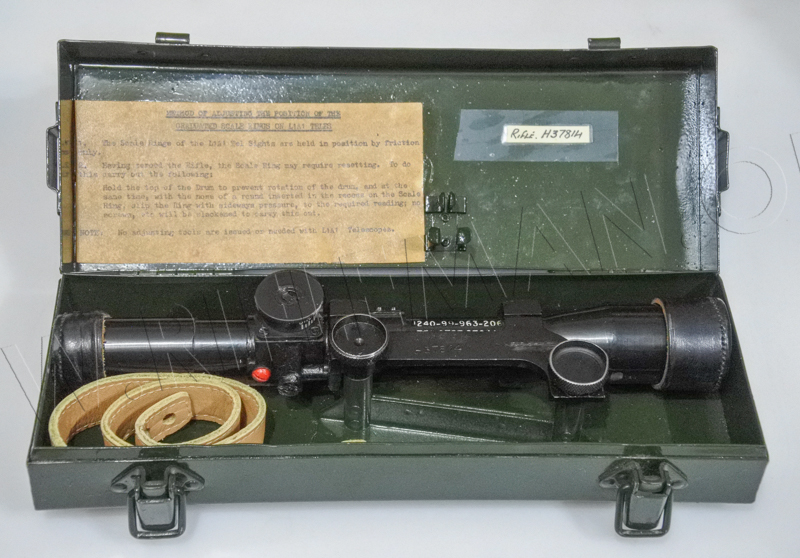 Issued in either an older style steel case with rounded corners,

or with a straight-sided version,

the scope and tin appeared little different from the early ones for the No.4 (T) rifle,

but the 'scopes were no longer fitted with the sliding sun shields.

The label inside the case lid carried detail of resetting the scale rings on the adjustment drums after zeroing.

The ring was rotated using the point of the bullet of a 7.62mm cartridge.

will notice the lack of the adjusting tool that was required to adjust the drum settings on that unit.

There was an aide-memoire issued with each equipment,

The pamphlet carried the warning that it was not to be taken on active service. 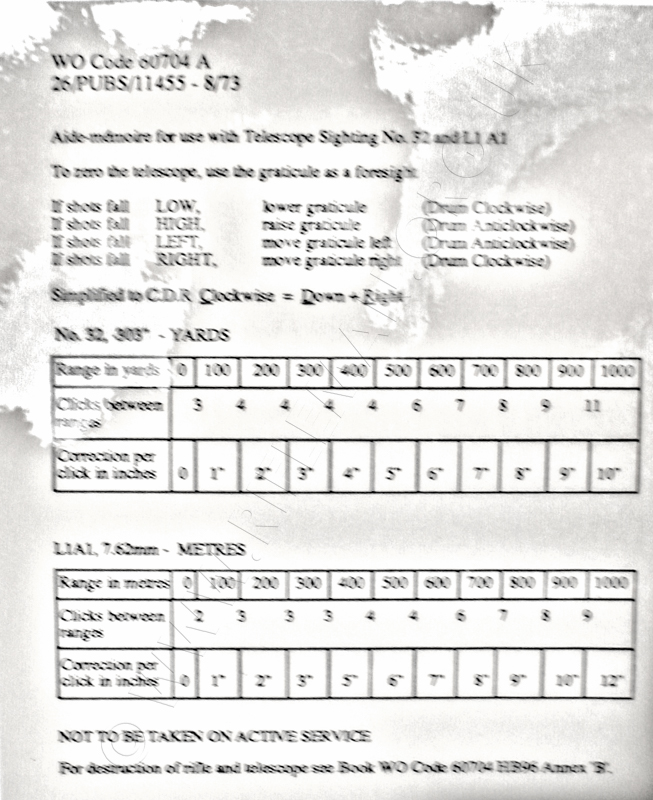 L42A1 rifles were later also fitted with the Individual Weapon Sight (IWS), the first generation of

image intensifying sights for use at night or in extremely low light conditions.

The rifle shown below is so configured, with the special mounting bracket manufactured for the IWS

utilising the same mounting pads on the rifle that accommodated the telescope on its bracket.

The cover for the objective lens has been left in place because this is a working example,

and the intensifier tube would be damaged by normal daylight,

with a vertical split normally closed like a pair of curtains,

but which separate when the shooter's eye-socket presses against the rear cup.

has the IWS switched on but is not being held in the aim.

The brightness of the display would be more than sufficient to give away an operative's position.

that had been converted to the No.4T telescoped rifle usually by Holland & Holland,

were still in service with their new 7.62mm barrels and metricated telescopes on the Falkland Islands several decades after.

The ammunition was no longer the rimmed .303 cartridge, by then replaced with the NATO rimless round,

but the actions and, probably, the butt-stocks and cut-back lower fore-ends were already at least thirty years old.

The weight and imbalance of the unit with the IWS mounted has to be experienced to be believed.

This night-sight was also used on the L1A1 SLR (Self-Loading-Rifle) of Fabrique Nationale design, and on the SA80 Individual Weapon.

The sight's transit case usually contained the mounting bracket adapters for each of these rifles.

In addition, the sight was used either on a tripod or with a pistol-grip style handle for observation purposes,

for instance on the border between Eire and Northern Ireland,

when British patrols were attempting to halt the clandestine night-time transfer of I.R.A. arms and personnel across the border.

Here illustrated is the transit chest with all usual kit - including the rifles canvas slip.

The wooden chamber-cleaning rod is clipped under the chest's lid,

on the lower right of the lid.

This small plastic container was originally used for a similar purpose with the Carl Gustav rocket launcher.

The following three images were taken by courtesy of the trustees of the Small Arms Collection at Warminster. 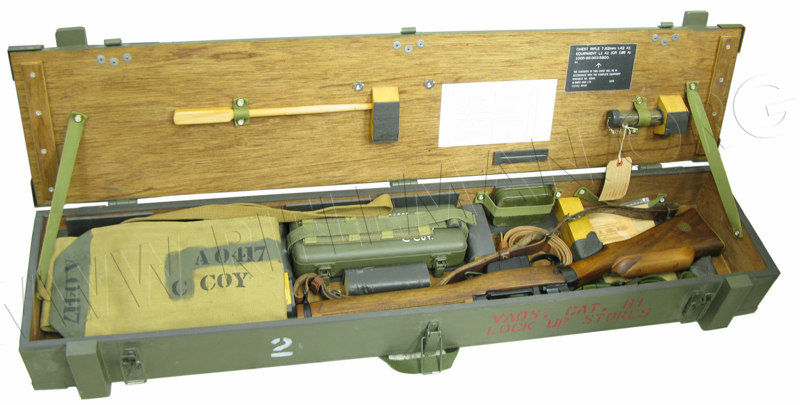 The main label inside the chest lid is shown below 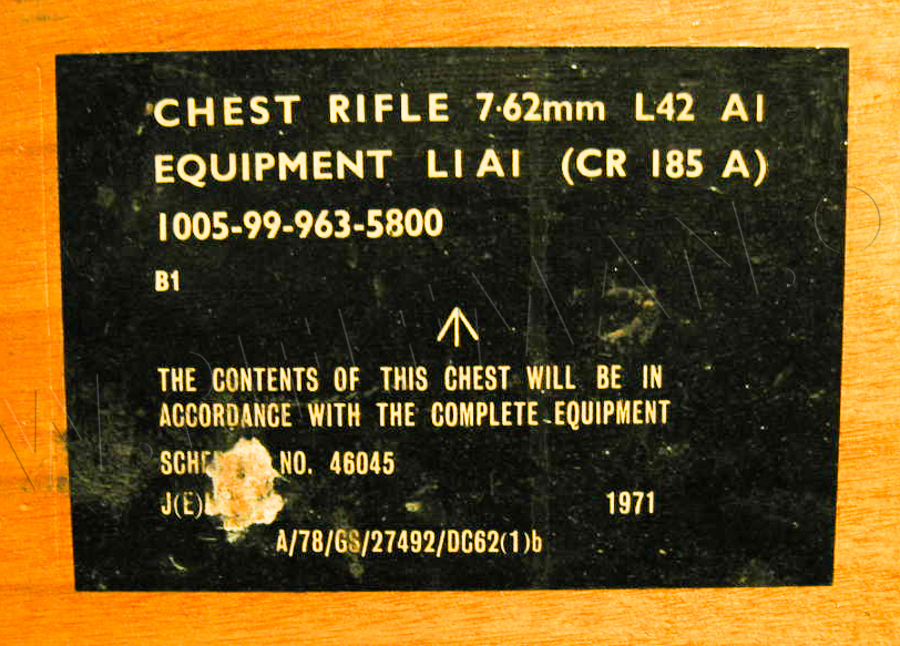 The layout of all equipment was usually as below, with the famous Signaller's spotting telescope

just as used by the Lee-Enfield Rifle No.4(T) sniper and observer in WWII.

Next; the Complete Equipment Schedule for the rifle and equipment.

The document is illustrated in the form of a text-searchable flip-page booklet.

Below: the Parts List for the L39A1 military target rifle and the L42A1 sniping rifle, with drawings.

The document is illustrated in the form of a text-searchable flip-page booklet.

The IWS in its transit chest with the mounting bracket for the L42A1 attached,

and with separate mounts for the SA80 and L1A1 SLR. 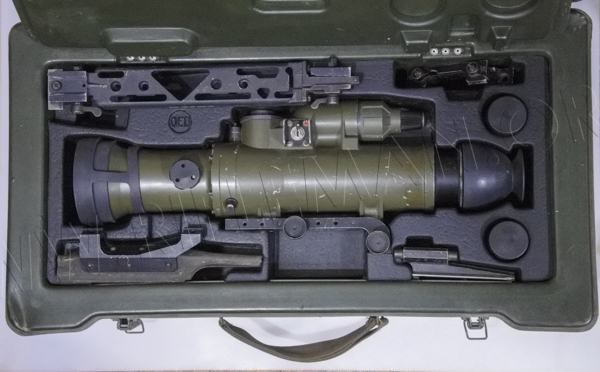 The reticule, engraved on glass, is that for the infantry model of IWS,

with only the lower centreline, with vertical windage calibrations above,

and a small cross just about evident at the lower RH corner of the 'E' in the Rifleman watermark. 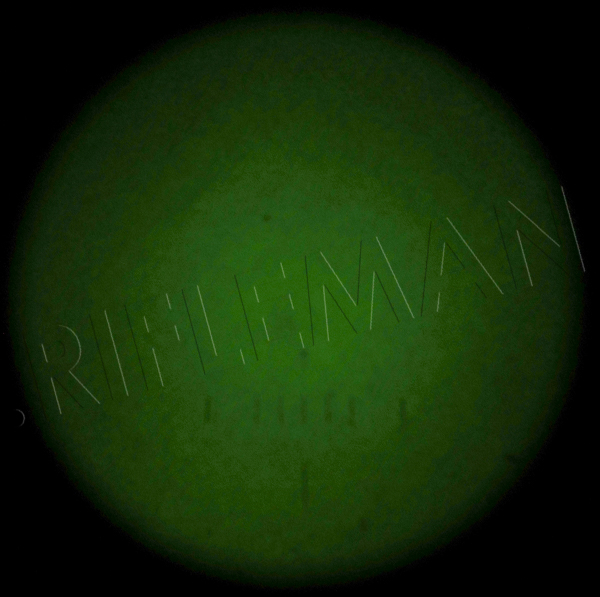 The image below was taken in what was almost total darkness to the naked eye,

at a short range of barely 100 yards. 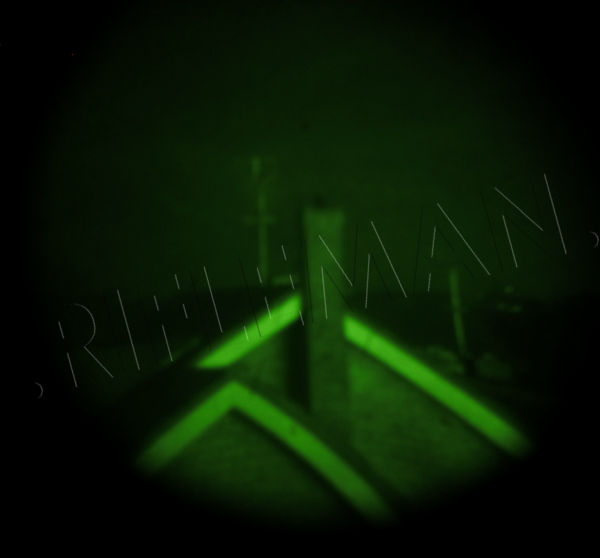 The non-rechargeable 7 volt cells are shown below,

that on the right with its protective end covers,

as on the two spare cells in the transit chest image shown above.

Spares should be kept refrigerated in long term storage. 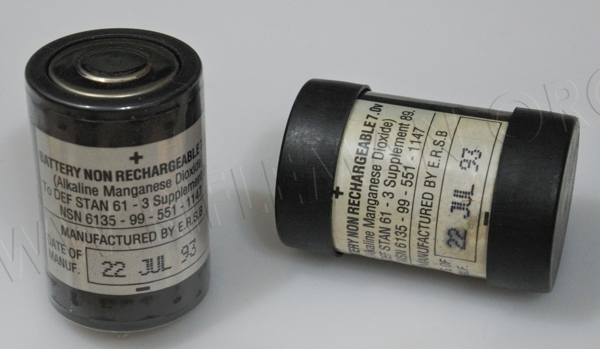