Circa 1930-31, Arthur Hale, of Parker-Hale, designed and had built for himself a rifle to the highest specification the company could then achieve. It is believed that one was presented as a prize for the Dewar competiton and, subsequently, the rifle was put into custom production carrying the name of that prestigious competiton, one of a number of events involving rapid fire in which they were intended for use by virtue of the "Time-limit Speed Lever" referred to in the drawing below. These rifles were, by 1932, receiving notable accolades.

The rifle below is an early model, specially barrelled and built on the action of the 'Famous Model 12'.

The advertising blurb in the company's 1933 catalogue went as follows;

This is not a standard Rifle; we do not claim it to be any more accurate than a first-class selected standard weapon by the well-known makers. It is intended to be made to order for experts who know exactly what they want and are prepared to pay for high-class hand work to get it. Needless to say, no effort is spared to turn this rifle out with a super accurate barrel, and we give below a specification which can be modified to suit individual requirements.

Barrel.-B.S.A. No. 12 without backsight, matted strip up to foresight block " Parkerifled " with specially selected internal tube.

Fore-end.-Fine walnut of correct length to enable the sling to be hung from the wood, preventing any tendency to upset the barrel. Full checkered with best cut up checkering and shaped to minimise slip. Rear sling dye on side of fore-end to prevent cant.

Butt.-Fine walnut, made to measure if required, cast off to prevent the comb interfering with the face, integral cheek piece. Specially designed pistol grip for target shooting and fitted with rubber recoil pad and silver name plate on top of comb.

Weight.-9lbs. 14 ozs., without 'scope slght. Each rifle thoroughly tested to find the most suitable brand of ammunition for highest class match shooting.

The best cleaning rods to order for the above rifle are BK.3 or BK.4.

A Parker-Hale Telescope sight similar to the one illustrated, but with improved mounts can be had at £6 15 0 extra.

(The rifle's cost was more than twice that of the contemporary basic B.S.A. Model No.12 rifle; the weight of the later BSA Model 15 based rifles was increased. Ed.)

Lord Cawdor, Cawdor Castle, Nairn N.B. 18-8-32.
" It is without exception, the finest target rifle I have ever had the pleasure of handling.' In conclusion I should like to offer my sincere congratulations on producing such a! magnificent target rifle as the ' Dewarifle.' "

Further letter dated 19-8-32.
" By all means make what use you like of my appreciation of your ' Dewarifle.' I am only too pleased to do anything I can to help the sale of 'the best,' more especially when it is all British."

By 1935 the publicity was further formalised and,

on a page (right) also advertising the

and the selected "Centurion" barrel,

rifles as an optional extra,

the latest Dewarifle was detailed as shown.

One of the notable aspects of most builds of Dewar rifle was,

in common with the Vickers Champion, the forward curled under-lever

The rifle illustrated below, of later build than

the above top of the page drawing of a rifle with a target-scope,

is constructed on the BSA Model 15 action

As related, these rifles were custom made, and stocking could be entirely to the customer's own specification.

An example of such a rifle is illustrated below.

Immediately below, and further down the page below more detaile images of the above rifle, are a pair of advertisements from 1939 showing two options for stocking. 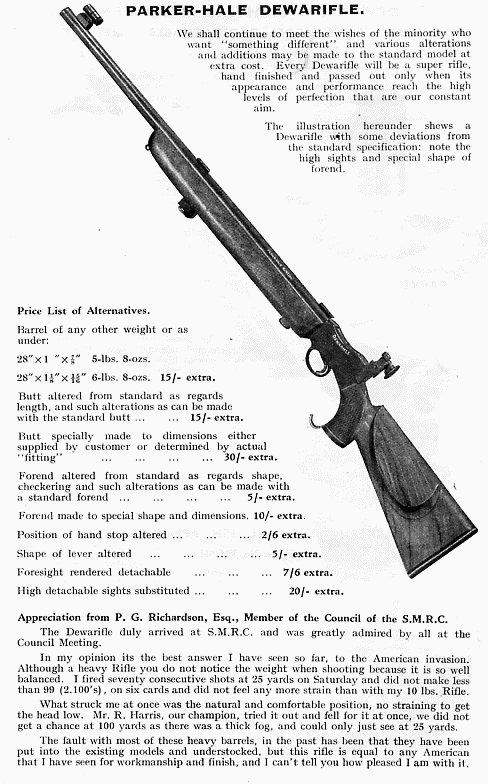 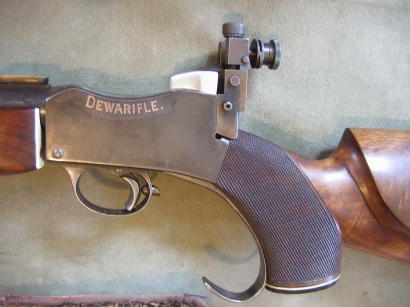 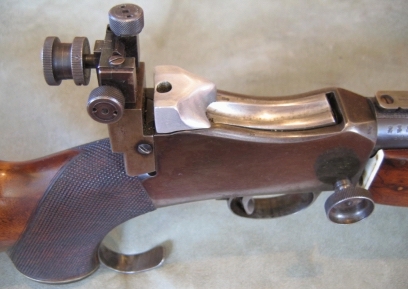 This rifle has also been fitted, quite probably in the original build, with the contemporary three point barrel-bedding system. Two bearing pins are at 60 degrees either side of the top bore centreline, whilst the third is adjusted from below throug the fore-end. The 'matted' upper section of the barrel is clearly evident below; an anti-reflective/mirage feature which was the fore-runner of the file-cut ribs by 1935 available with the "Centurion" barrel fitted to the so named top model of B.S.A.'s own highly specified Model 15, or indeed to a specially ordered Model No.12/15 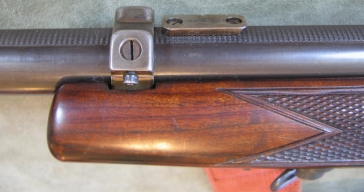 Parker-Hale fitted their own fore-sights with the clamping arrangement as used on their telescopic sight mounts. 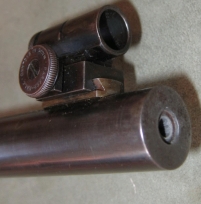 Their 1939 advertisement for the sight options is shown below 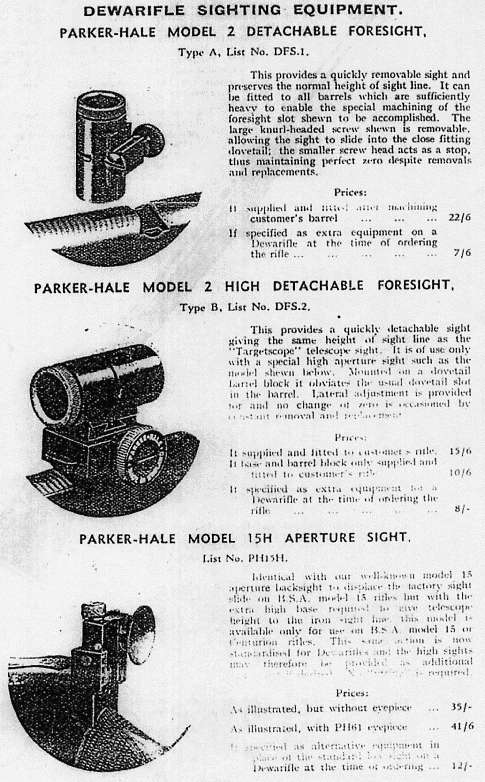 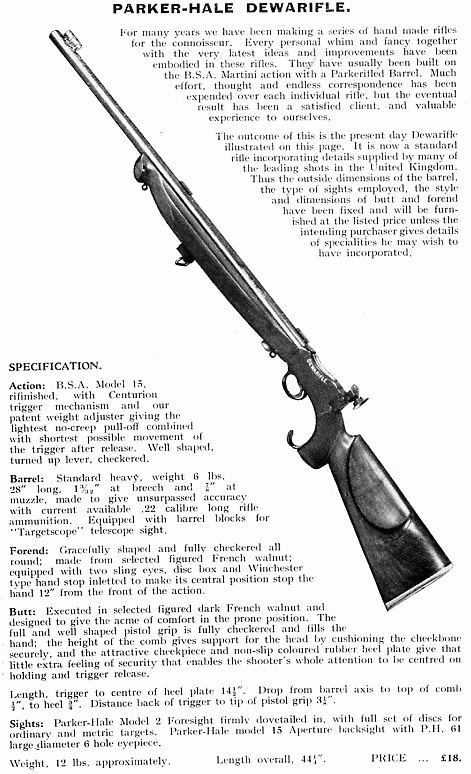 Right: a recent photograph of the equivalent

version to the Dewar rifle

It is presently minus its fore-sight

and has been retro-fitted

with the later rear-sight from a

Usympathetically, the dovetail block for this,

out of view on the left-hand side,

has its mounting screw holes

drilled through the fine inlaid lettering

on the side of the action body.

Possibly as a personal preference,

the under-lever is more akin to

that of a standard Model 15, unless a

previous owner has elected to

The image below illustrates the great width used for the fore-end wood of some of these rifles.

Before long, demand was such that a three month delivery had become the norm. 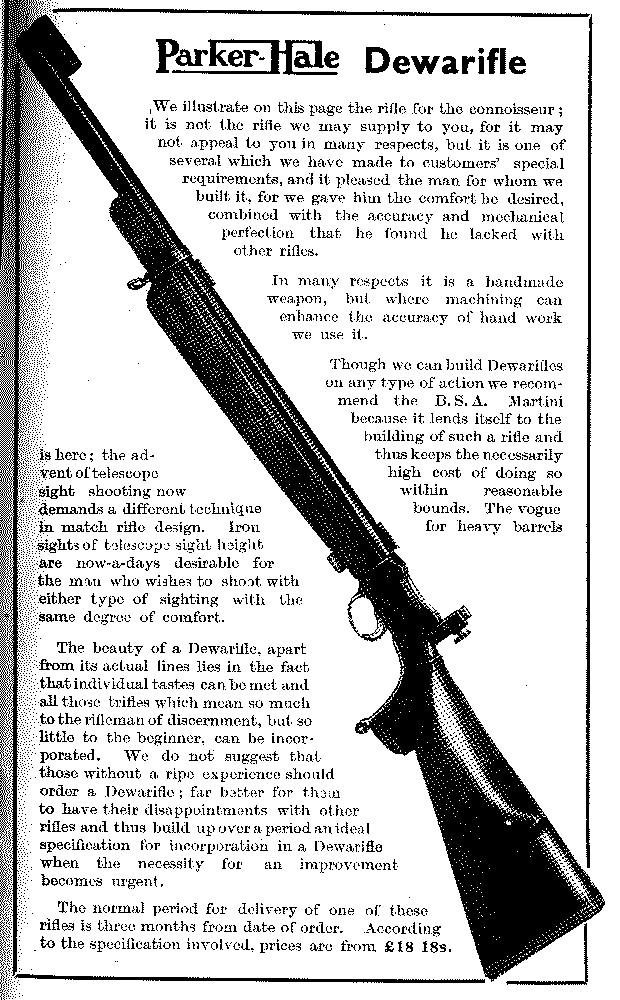 The above late advertisement uses the same rifle drawing printed several years earlier in the 1935 catalogue.

with which most production was endowed. In that time, the cost has increased from around £15 to nearly £19 - more than 25% - an inflationary figure greater than that experienced by the more common standard BSA small-bore rifles of the period. In 1940, the Dewar was nearly twice the price of the more recently introduced 12/15 and three times that of the Model 12.

We are sometimes asked for information concerning Parker-Hale products, particularly with regard to dating the manufacture of the company's rifles. We have made enquiries regarding whether any records that might assist such research remain in existence. We approached Parker-Hale, as that company stands at present, and also two other companies, one of which purchased the trading rights for cleaning products, and the other which bought-up most other remaining stock. The owner of the latter company recalls being present, at the time of the sale, and watching sights and valuable other stock being binned for disposal at scrap metal weight rates. Sadly he also remembers seeing all the files and papers from the offices being brought out of the premises and piled onto a huge pyre! As far as we are aware, any relevant records are therefore likely to have gone up in smoke; such has been the way of the World in recent years, with similar action being often taken in the name of fraud prevention.