That 9mm Flobert cartridge chambered model was offered in their 1893 catalogue.

The 6mm Flobert chambered rifle shown on this page is a later, but similar, straight-wristed single-shot rifle of 43" overall length, with a barrel of 24", and weighing 4 lbs. 3oz. The rifling is 6-groove with an approximately 1-in-12" twist. With two-banded, military style stocking, the front band doubles as the fore-end nose-cap. There is a 4-inch-long finger-groove either side of the three-quarter-length stock. The rear band carries the non-swivelling front sling-loop, whilst the identical rear sling-loop has an integral wood screw fastened into the underside of the butt 2½" forward of the toe.

Bolt locking is achieved by the rotation of the bolt handle rib down against the rear shoulder of the receiver bridge.

There is a fine vertical groove machined into the right-hand-side of the stock, just forward of the trigger-guard,

to accommodate the bolt handle's stem in its vertically closed position.

Over the time this 6mm rifle model was manufactured, the 9mm model was still available,

Below is the 6mm rifle shown on a page from Manufrance's 1913 catalogue.

The "Double Culot" (double base ) 6mm 'Bouchette' cartridge is illustrated with its conical bullet.

The model name of "Populaire", marked to the rear of the receiver, is encompassed by the wording "Carabine Scolaire",

well indicating the intended use of the rifle by the youth of France. 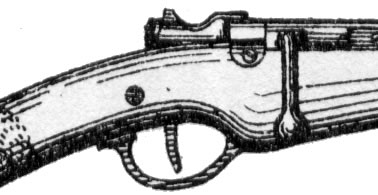 Below are sectional drawings of the action with the bolt open and closed.

The action and rear-sight, viewed from above.

This system applied between 1844 and 1968, and can therefore at least confirm the latest date of such French firearms.

As the barrel marking indicates, this rifle was produced for, and specifically adopted by, the then French National Shooting Federation,

This was a situation equivalent to that which applied in the U.K, with British rifles manufactured or converted especially for our then Society of Miniature Rifle Clubs.

As can be seen, the Société de Tir then covered all France, Algeria and the Colonies. 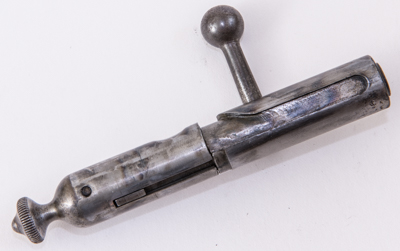 The groove under the bolt-head, above, accepts the circular

groove in the bolt-way below the bolt, and is pushed forward

into its breech cut-out on bolt closure.

The bolt cocks on closing. 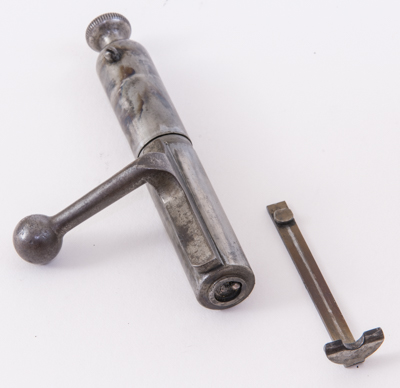 On opening, the bolt moves back the greater part of its travel

before the spigot in the extractor comes against the end

of its bolt groove and withdraws the extractor only a short

There is no ejection.

The bolt body and cocking-piece have been designed with

Not for their cadets was the rather more square and economically

manufactured style of the British cadet rifles of the day.

The Populaire-Scolaire is show on this page from the Manufrance 1925 catalogue,

along with the "Buffalo-Lebel" rifle that is also represented on this site.

The ammunition was then priced at 15.50 francs per 250 rounds, and the rifle at 190 francs; this when 1 franc was approximately the equivalent of 3.5p. Thus the rifle cost £6.65, and the ammunition about 54 new pence - or around a fifth of a decimal British penny - per round. [Ed: For a retired Brit., it rather goes against the grain to use the obviously plural noun ' pence' to describe a singular new penny!] 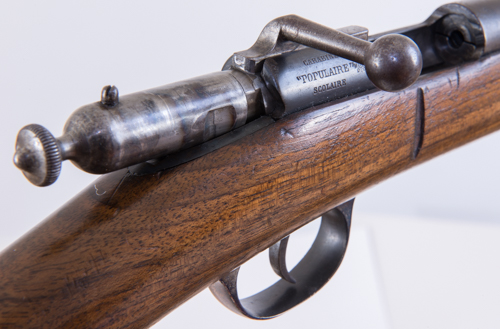 The fine vertical groove to accommodate the closed bolt handle

can be seen in the image to the left.

The hardened pin, screwed into the top of the bolt body, locates in a small semi-circular

detent above where the rear of the action meets the woodwork. This holds the closed bolt

firmly in position in the receiver between the pin and the bolt handle rib, which acts as the

The extractor is shown below, just part-way withdrawn by the bolt. The full rearward

movement of the extractor is no more than 10mm, the 6mm cartridge case being much less in

length; but, cleverly if by design, with the most likely proviso that the trigger has been

released when the bolt is opened, the sear bears upwards on the underside 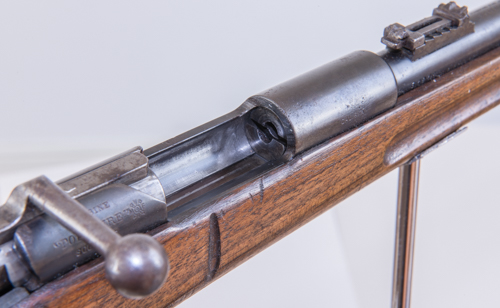 of the extractor bar and raises the forward end by about 5mm.

This is hardly the action of an ejector, but would presumably make removal of the fired case

somewhat easier, even if it is necessary to tip the rifle sideways away from the shoulder.

Without the appropriate ammunition, we have been unable to put the rifle to the test.

Three images of the breech, muzzle and rifling are shown below.

CLICKING ON THE CENTRE IMAGE WILL SHOW

A SHORT VIDEO CLIP OF A PASSAGE THROUGH THE BORE

Ring bulges can just be discerned early in the video, and pitting is evident nearer to the muzzle. 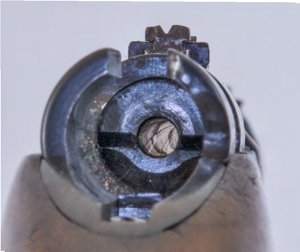 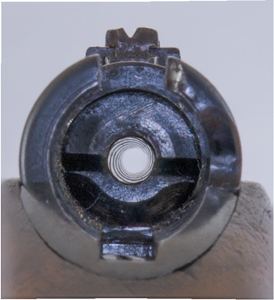 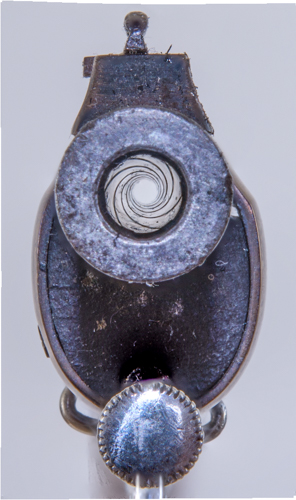 A pressure "ring" bulge can be seen in the bore about one inch ahead of the chamber, with another about two inches forward of that;

otherwise the rifling is in quite good condition for its age.

Such rings are typically caused by the rifle being fired with oil in the bore - or from a stuck bullet, fired by only the primer of a powder-less cartridge, being followed up by

another fully powered round.

The chamber length from the rear to the leed of the rifling is just 7mm, the cartridge rim being accommodated by a recess in the bolt-head,

which recess is approximately 7.5mm in diameter.

It will be seen that the rifle is still fitted with its original clearing/cleaning rod, and even this is finely embellished.

Below is an image of a lead slug - in the form of a .22 bullet - that has been passed through this barrel.

The very slightly slanted indentation from a land is in the centre, and the compression of the bullet in the grooves can be seen either side,

where it is just possible to discern the original twin peripheral rows of indentations which held lubricant on the driving band.

See the Measurements Table above for dimensions

The width of this image is equivalent to the entire slug diameter of approximately 0.220", or 5.6mm.

This microscopic image of the slug affords a good indication of the state of the barrel; and comparison with the images of identical slugs used in the other rifles on this website will show the variances in tightness, or otherwise, of the various bores by noting the relative size and condition of the lubricant grooves of each.

Above, the rifle's calibre is marked simply " CAL. 6 m/m " on the RHS of the barrel reinforce, whilst the serial number is below the tanget rear-sight. 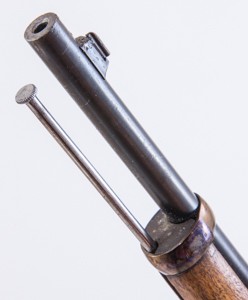 The foresight, nose-cap band and clearing rod are shown, left

and the rear-sight, with simple graduations 1 to 5,

presumably not in hundreds of metres, is shown, right.

On the LHS of the barrel, immediately below the rear-sight, the word "ACIER" is stamped,

which is simply French for "STEEL",

and rather states the obvious, unless something else is lost in translation.

A close-up shot of the model marking on the receiver is shown below.

Below is an image of the bolt-way, with extractor groove, and showing the trigger's upper section and sear.

This can better be viewed in the rifle's sectional drawings illustrated earlier in the page.

A Saloon and Garden version of the rifle, with sporting furniture, was also offered in both 6mm and 9mm calibres.

For each of these, both shot and ball cartridges were available. 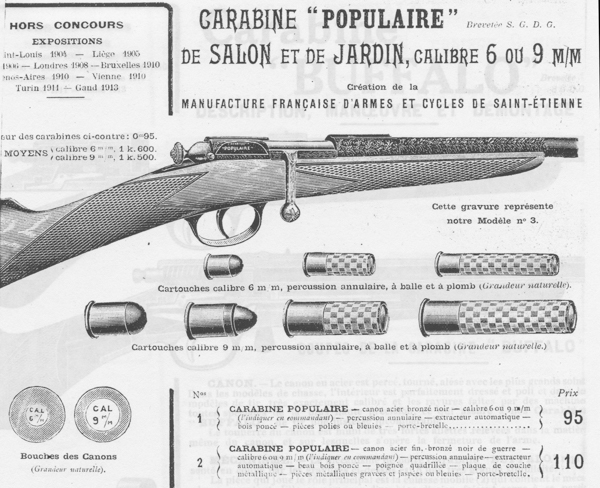 The rifle name of "Populaire" was in use for many years, and a Populaire Junior, or Model 526, was put into production immediately after the Second World War from 1945, still in 6mm calibre. The 9mm rifle was still being sold in the mid 1960s as the Model 502 with either a rifled or smooth-bored barrel. A Model 508 was available, with stock chequering and an engraved action, whilst an even more deluxe Model 518 used the highest quality wood furniture and had more extensive engraving.

The following cartridges were in 1913 advertised as being suitable for the various models of the Populaire and Buffalo rifles.

The American cartridges, incuding the ubiquitous .22RF Long Rifle are illustrated separately from Manufrances own production.

It is interesting to note that the Company's Buffalo-Lebel and Buffalo-Stand rifles were available in the Winchester Centre-Fire calibre ( W.C.F.)

The action of the Populaire rifle was not restricted to rifles only. It was also put to good use in a range of pistols under the same name.

The high finsih quality is evident in the catalogue illustrations, the prices then being commensurate with the amount of work invested in the products,

particularly the engraved Model No.7 - or "Hercule". May the famous detective have been in mind when this arm was named? Sadly, probably not.

Although written before, the first of Agatha Christie's Poirot novels was not published until 1919-20, and this catalogue dates from several years earlier.

The Manufrance factory at Saint-Etienne 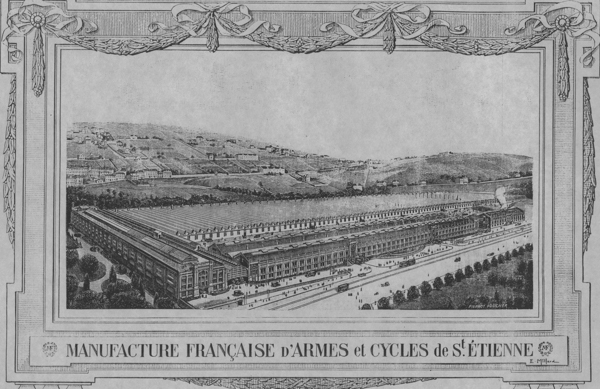 Manufrance started as a sporting goods mail-order company in 1885. By 1893 they were producing fishing tackle, at the same time as construction of the above new factory had begun. In October 1887, as the "Manufacture Française d'Armes", they patented their "Ideal" Rifle. With the invention of the bicycle, the company produced their own using the name "Hirondelle". By 1901 the company name became as shown in the illustrations, the wording "et Cycles" also having been added. In 1904, the company were manufacturing their own ammunition, and by 1906 a range of sewing machines had been introduced. 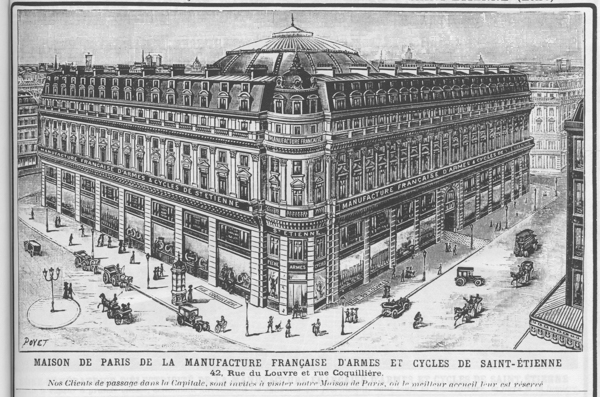 At the date of this catalogue, immediately before the First World War in 1913, the company, that had become "Manufrance" two years earlier, boasted retail outlets in Paris, Marseille, Lyon, Bordeaux, Lille, Toulouse, Nantes, Rouen and Nancy. Between the Wars, the company became generally known as MAS (Manufacture d’armes de Saint-Étienne) , which initials prefixed the models of their rifles. By 1973 the outlets' number had increased to 64; but, after almost a hundred years of successful operation, bankruptcy was announced in 1980, and liquidation took place in 1985. The then state-owned manufacturing company was subsequently merged with the French defence conglomerate Nexter.