How to make a replacement magazine for the

It should be borne in mind that a good workshop, and some sheet metal-working experience,

would be of great help in the successful completion of this conversion.

If you have any doubts about doing this yourself, a capable model engineer pal would be worth his weight in gold!

Quite obviously, a good toolmaker could happily manufacture a replacement magazine from scratch,

but this option provides sensible half-way house to sourcing the appropriate materials in one place,

and obviating the need for the fine work that would be required in shaping the magazine lips, sourcing a spring, and suchlike.

The only material required other than the donor magazine itself,

A table of dimensions is to be found at the bottom of the page.

On the left in the next two images is the original magazine for the comparatively rare magazine-fed model of the War Office Miniature rifle.

To the right of these images are views from above and below of the donor magazine for our replacement of a missing original.

This magazine is from the BSA Sportsman Five rifle and, while not exactly available "off-the-shelf",

an example is considerably easier to come by than an original for the War Office rifle,

which magazines are nowadays not unreasonably likened to "hens' teeth". 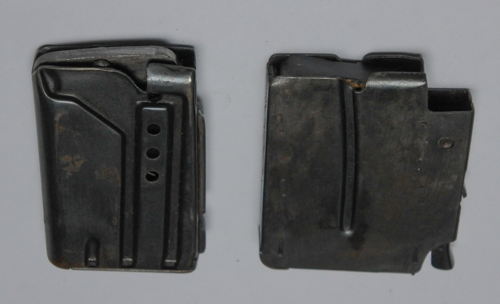 An original magazine would nowadays be costly, even if one were to be found.

The BSA Sportsman Five rifle is fairly common, and even a complete otherwise defunct rifle

with magazine could be purchased for rather less than an original War Office rifle mag. 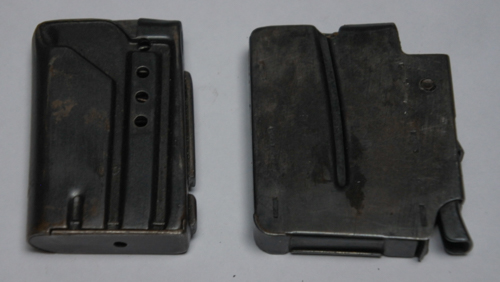 The Sportsman Five magazine will be recognised by any fortunate owner of a Lee-Enfield Rifle No.7,

the .22RF training rifle produced by the Birmingham Small Arms Co., for the Royal Air Force in the late 1940s.

When BSA utilised the Sportsman unit for that rifle, it was fitted into a rimfire-sized magazine-well

that was fabricated in a new platform rivetted high inside a standard Lee-Enfield .303"CF magazine shell.

To achieve this, the release-lever, that previously permitted removal of the magazine

from beneath the Sportsman rifle, was inverted in its compartment at the rear of the unit.

It could then be used to lock and release the magazine from above, within the Lee-Enfield full-size unit.

Below: the No.7 rifle magazine and .22RF insert, with the standard Sportsman Five magazine shown upper left for comparison. 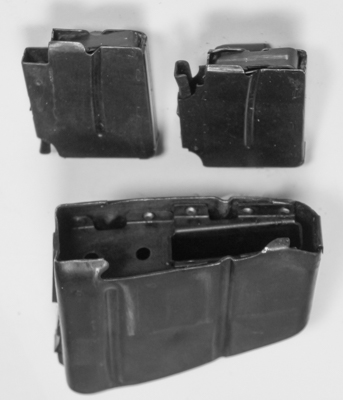 To convert the Sportsman magazine for use in the War Office Miniature rifle, this release lever is removed completely, 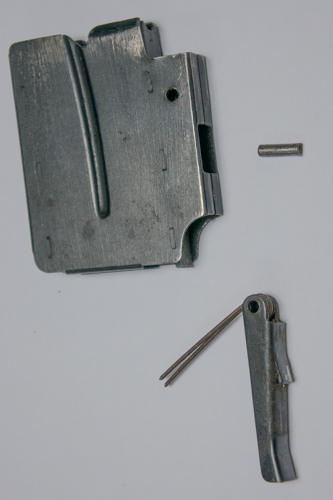 and the extensions to the magazine side-plates that form the lever housing are trimmed off,

and the lever and its coil-spring dispensed with;

in our case, we used "nibblers" to limit distortion of the remaining side-plates,

but a carefully wielded fine hacksaw would serve equally well. 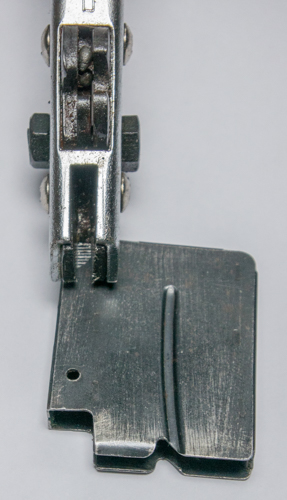 The result, and remnants, are shown below. 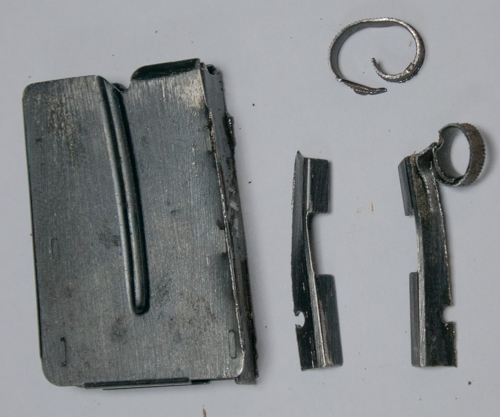 The internal dividing spacer plate, locked in place with three lugs on each side

(which engage in punched holes in the side-plates), will become the rear plate of the converted unit. 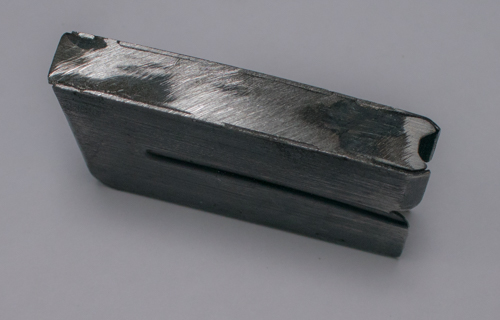 There is another similar plate that spaces the front of the magazine.

This must be removed to separate the two side-plates

The front returns of the square-cornered side-plates must then be pressed, or carefully beaten, flat.

A suitably radiussed mandrel is then used to form the quadrant curves, at the front of each plate (and handed),

that will be brazed together to produce the rounded nose necessary for the conversion. 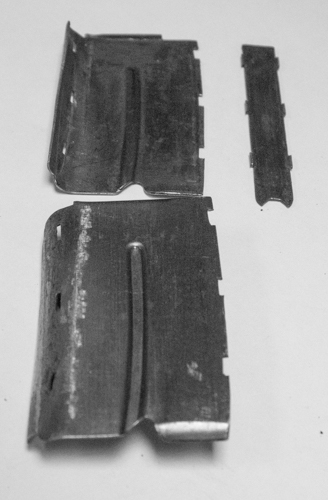 The two halves are here rested together to check fit and the critical spacing between the sides.

Because the new radiussed periphery is less than the distance around the original squared front corners,

it will be necessary to remove material from the front edges

by filing until the meeting of the two halves affords the correct width at the front of the casing.

It would be possible, before this, to fill in the three small slots each side

that previously held the lugs of the removed forward dividing plate.

It was here decided to simply leave them, as they present no problem other than a minor cosmetic one,

and filling could cause unwanted distortion of the sheet and possibly anyway show in the final blacked finish. 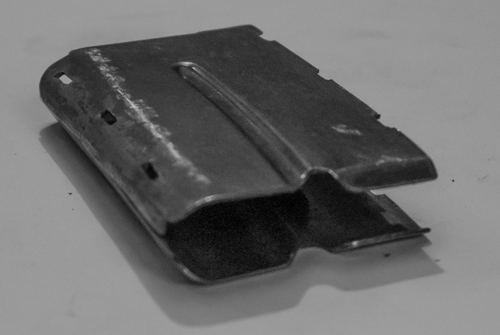 The original "back-plate" is loosely placed in position to check shape and spacing ......... 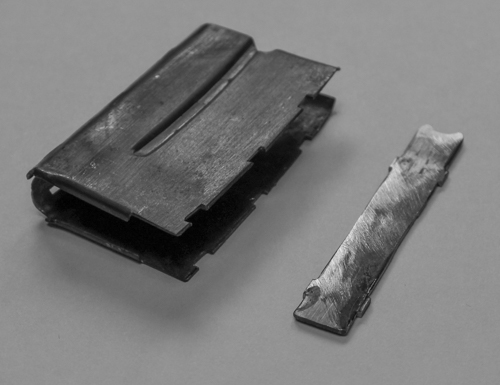 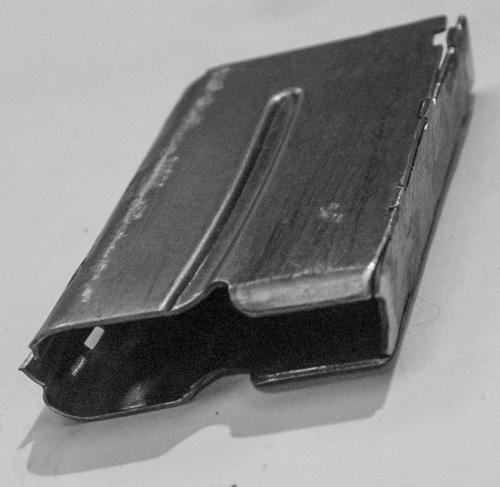 The new part-constructed casing is shown below alongside an original 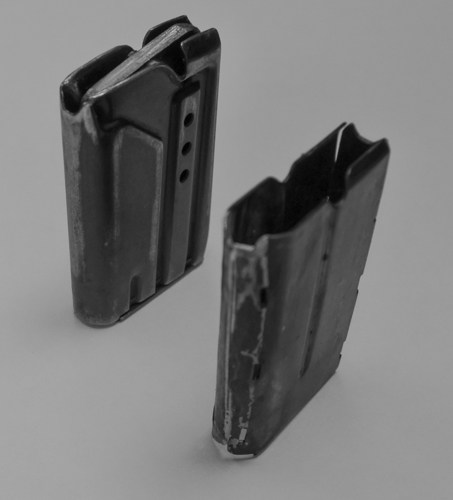 The sliding-fit Sportsman base-plate has to be modified, to fit the converted casing, by flattening the upward curved front end,

shortening to the correct length, and rounding the front to the shape of the magazine's new nose.

It may be preferable to adjust the position of the ridges pressed into the base-plate;

these ensure that it locks firmly in place under the pressure of the follower spring.

When the follower and spring have been put inside the magazine, the base-plate is pushed into place from the

front with the bottom of the lightly compressed spring being held down while doing so. 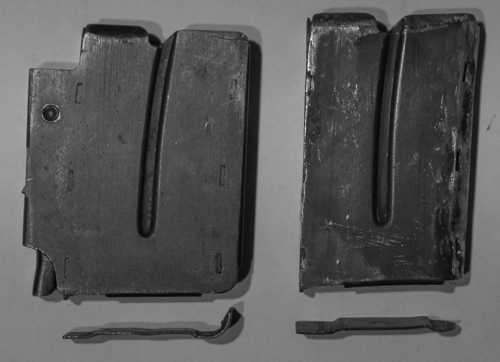 These images are all of early rough fitting, and there is much final finishing work needed before completion. 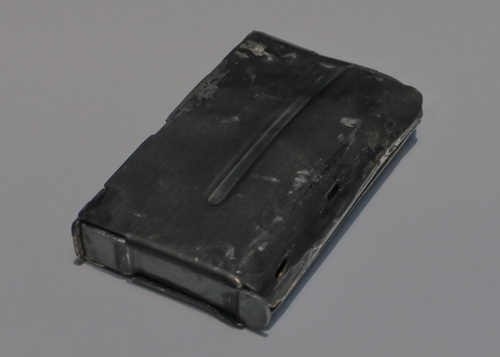 It is sensible, at each stage of construction, to check the fit of the modified case in the magazine-well of your rifle.

A good seating under the receiver sides, at the rear , and below the chamber, will ensure smooth feeding of the rounds.

The black-cased cartridge is a specially produced Remington dummy for just such testing purposes.

An idea can be gained of potential fit and appearance from above and below the rifle.

The two-part spine, with the gap that forms the notch into which the

sprung locking/release lever locates, has yet to be added to the rear of the casing. 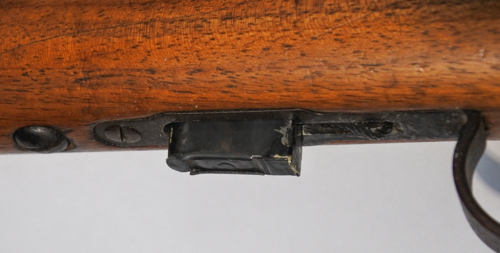 It is most straight forward to utilise the follower and spring from the Sportsman magazine;

to fit smoothly inside the narrowing of the now round nose in the modified casing. 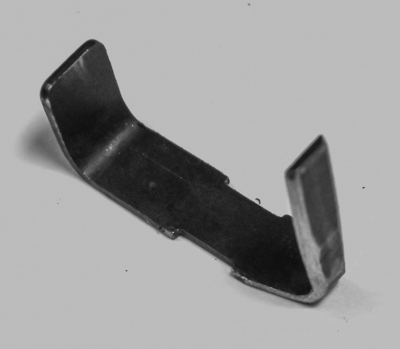 We also fabricated a follower to closely match the War Office original; the latter is shown left in the image below.

The replica follower's basic cut-out is shown centre; this was prior to drilling for, and fitment of, the three pins.

The part-prepared replacement items are also shown centre, and the standard Sportsman magazine, base and follower on the right. 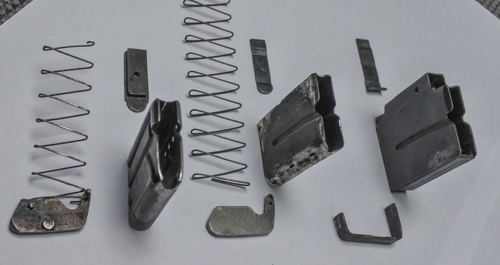 Below, the roughed-out conversion parts are shown in close-up.

The end of the spring wire fits into the upper of the two small holes drilled in the tail of the follower.

One of the two small-diameter guiding pins will be pressed into the lower hole. 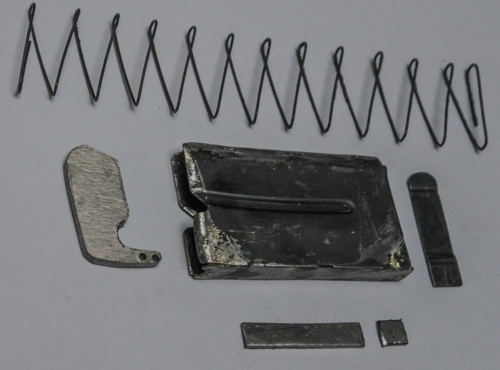 While a follower similar to the original will look far more in keeping, especially viewed from above the rifle's receiver,

fitting such a replica is considerably more complicated than it may at first appear. The replica follower is shown below. 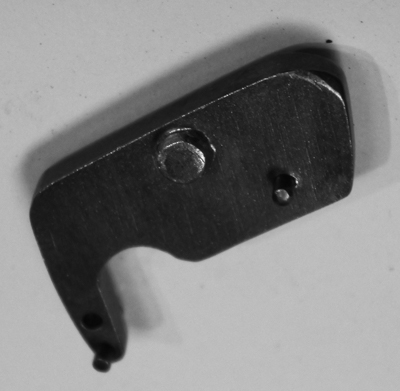 Provision has to be made to prevent the original style follower just being pushed straight out of the top of the magazine by the spring.

Such is the purpose of the original design's grooves pressed into the magazine shell's side-plates;

the small diameter front and rear pins of the follower run in the channels formed inside,

and the front pin is run forward and up, by the angled upper front depression of the pressing in the side-plate,

to what is effectively a stop formed by its termination about a quarter-inch from the top of the casing near the magazine's round nose.

Equivalent upper "stops" would need to be engineered inside the side-plates of the converted Sportsman magazine,

but without interfering with the free vertical passage of rounds loaded above the follower.

Such an arrangement needs to be planned and fixed inside each side-plate before they are brazed together.

The larger, central pin through the follower runs against the central indent in the side of the War Office version,

and also runs against the equivalent indent in the Sportsman conversion.

If yThe gap between the longer, upper part of the spine, and the lower short section,

forms the locking detent into which the rifle's magazine release lever locates.

The shell, with these spine components added, is being fettled ready for finishing.

If you are happy that you seek only a suitable magazine to render your rifle operational,

then the complication just described would frankly be unnecessary.

Below is a closer view of the conversion, with the two roughed-out spine/rib components now silver-soldered to the rear of the casing. 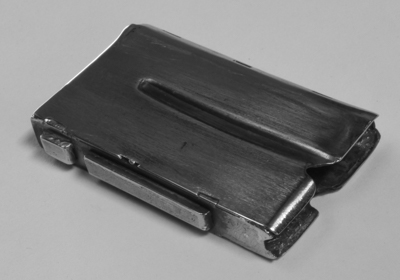 The completed and refinished magazine lies between the donor Sportsman Five model and the War Office original. 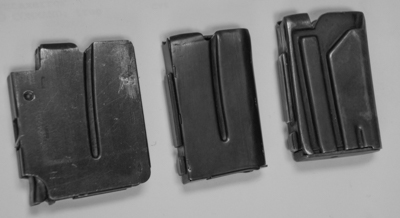 Here are two images, the left being of the near finished replica magazine base

protruding beneath the rifle, and the right image showing an original magazine in place.

... and a view from above of the test round in the newly converted magazine.

Finally, we have mentioned, on the comprehensive page relating to the War Office Pattern Miniature Rifle,

This subject has also been mentioned on the separate page giving details of the origin of the War Office rifle's magazine,

which lies with the Savage Arms Company' s design.

The Savage magazine is of virtually identical width, but is about "50 thou" ( 0.050") larger in the fore and aft dimension.

It would be perfectly possible to vertically slit the rounded nose of the magazine , remove some material from the new edges,

and silver-solder or braze the edges back together to for a new, shorter nose.

It may be possible to just file a new slot in the rear rib to engage the rifle's locking/release lever,

and replacement with a solid two piece one as on the original War Office version;

this could be done exactly as described above for the conversion of the BSA Sportsman-Five magazine.

The "pro" of converting the Savage magazine would be near original appearance and the seven-round capacity,

while the only "con" is the current value of the American product on the classic arms market;

this could be anywhere between double and treble the cost of a BSA Sportsman-Five example,

and is arguably more historically destructive.

At the time of writing, Savage 1908 Patent magazines have been commanding well in excess of USD 100.00,

when a complete rifle in well-used condition could be bought for USD250-350.