The AINLEY RIFLE - a prototype high-power weapon in 7mm calibre

of what is catalogued by them as a Pattern '13 rifle.

This a not unreasonable annotation, as the rifle is evidently built around a heavily modified version of the Mauser action on which the trials P'13 and production P'14 rifles were based.

In the mid-1930s the War Office was preparing for a potential requirement for the use of small-arms to combat light armoured vehicles.

Already in the pipeline was Captain Boys' design for an infantryman portable purpose-built anti-tank rifle,

and his Boys .55 calibre Anti-Tank Rifle is covered on this site, including in its several prototyped configurations.

Another option, even more portable, was a high powered individual infantry weapon.

A separate development team at Enfield was led by Captain J.R. Ainley, and, in common with Captain Boys' anti-tank rifle,

the resultant high velocity weapon shown on this page became known as the "Ainley Rifle".

Very shortly before the commencement of the Second World War, in mid 1939, the trialling of two prototypes was already under way.

The proposal had been for a weapon producing a muzzle velocity in the region of 3,700 feet per second,

and the testing of various calibres of ammunition up to this point resulted in the selection of a .276 inch cartridge.

The calibre of this round, however, was the only similarity to that of the original P'13 rifle; it was effectively a magnum cartridge.

Two prototypes were built at Enfield and, subsequently, orders for four trials rifles were given;

two for production by the Birmingham Small Arms Company, and two by Accles & Shelvoke Ltd.

No.3 is the Warminster rifle illustrated on this page, and No.4 was originally in the Enfield Pattern Room,

but now lies in the National Firearms Collection at the Leeds Royal Armouries.

These images are here shown by kind permission of the O.C. , S.A.S.C. Weapons Collection, and are joint copyright to the Small Arms School and www.rifleman.org.uk.

The rifle bears, on the LHS of the butt, SAC brass tag number 1160,

and is labelled as Experimental, being to Enfield Drawing No. DD (E) 2012 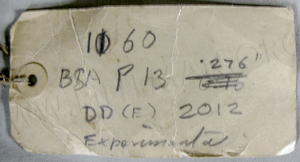 The top of the receiver is engraved with the Enfield drawing number, beneath which is the probable serial no. "3".

The configuration of the rifle could be considered almost sporting, or certainly of later military design,

with its trimmed back fore-end wood, and indeed hints of the

The rear-sight adjustment is somewhat reminiscent of that of the drum system on the Mk.1 Bren light machine gun.

The large lower drum is for elevation, and the small upper knurled wheel for windage.

As the rifle was also intended for sniping with its armour-piercing ammunition,

and potentially at comparatively long range, a dovetailed groove was machined

into the left-hand-side of the reciver body for the fitting of the mount for a telescopic sight. 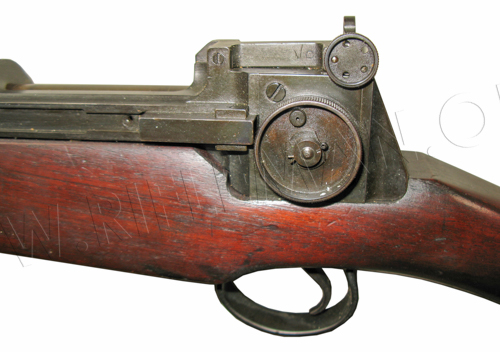 The mass of the high-pressure receiver, along with the robust sighting arrangement, 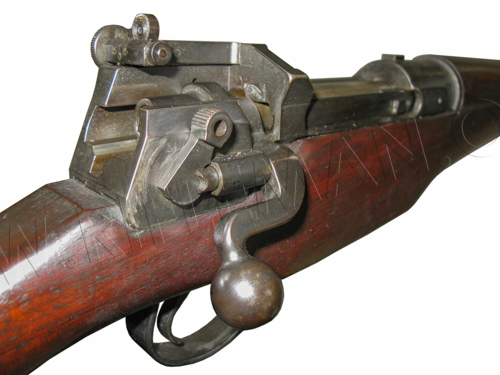 The windage calibration appears to cover 15 minutes each side,

in five minute divisions, but with a vernier for fine adjustment.

It all seems an exceptionally strong design, if tending towards 'clunky'. 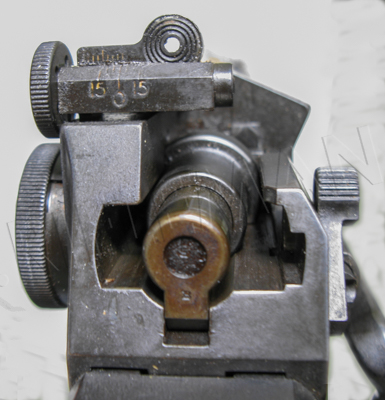 Below: again, the rifle begins to show a similarity to that of the Lee-Enfield Rifle No.4,

with the barrel's bayonet attachment lug arrangement ahead of the fore-sight block.

Comparison with the fore-sight block with that of a Pattern '14 .303" calibre rifle will show the latter to be significantly higher.

This is because the .303CF round was of a lower muzzle velocity, generating a higher arcing trajectory. 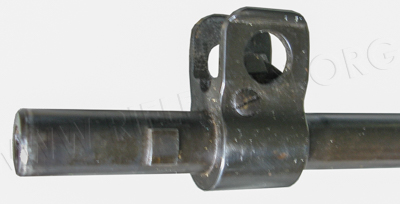 The recoil of these rifles was prodigious, and it was necessary to provide protection for the user.

An unusual alloy butt-plate cover, with its own sling-swivel, was fitted to the rifle.

This alloy casting was internally buffered with a pair of strong recoil-reducing springs. 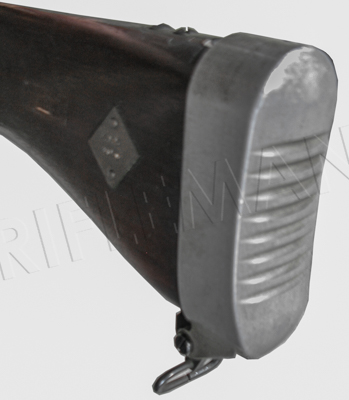 Even two or three designs of muzzle-brake were tested,

but a combination of factors resulted in the halting of the project,

not least of which was the progression of the war itself,

and the need to concentrate production capability on even more urgent equipment.

Also, there had been delays in finalising the ammunition and, in the meantime,

the hitherto poor performance of the existing armour-piercing .303 Mk.VIIP round,

which had proved incapable of penetrating German loop-holed sniper plates,

had been greatly improved with the introduction of the .303 Mark.VIIIW cartridge.

The heavy recoil of the rifle, and the complexity of satisfactorily countering this,

was also a significant factor in its failure to enter production.

Further detailed information on the nominal .280 inch ammunition, and much more, can be found

on the comprehensive website of the late Tony Edwards, which site is presently residing here:

and the Enfield No.3 Rifle (Pattern 1914) training version,

and the Soley Arms Co. Experimental adaptation of the P'14 (No.3) Rifle

plus the Lee-Enfield Rifle No.1 Mk.VI