The Lee-Enfield No.1 Mk.VI prototype and trials rifles

N.B. ALL PHOTOGRAPHS ON THIS PAGE ARE COPYRIGHTED TO BOTH WWW.RIFLEMAN.ORG.UK

AND TO THE RESPECTIVE MUSEUM COLLECTIONS

This rifle was the successor to the No.1 Mk.V, which had been the first of the Rifles, Short, Magazine Lee-Enfield No.1 (S.M.L.E.) to be fitted with a folding aperture sight.

The initial nomenclature for this page's subject rifle was certainly misleading.

The design bore slim resemblance to that of the No.1 S.M.L.E. rifles, employing a completely redesigned action body,

and much modified nose-cap arrangement. That the rifle's designation was changed to the Rifle No.4 Mk.I before it went fully into production, was no surprise.

The prototype and trials rifles were initially produced in three versions. These became known as the A, B, and C Pattern rifles.

The "A" models were the prototypes, built ca.1926, the "B" Pattern rifles represented the first trials production, and were manufactured in 1930 and 1931.

The first rifle illustrated on this page is a 1930 dated trials model of the second "B" Pattern model, with plain butt-plate.

This can be viewed in fine detail, with rotatable, zoomable images, further down the page.

An interesting adjunct to the design of this rifle was the need to test the new design of bayonet, shown in the above image.

The new nose-cap arrangement, familiar to all British servicemen between the 1940s and 1970s,

and indeed later in many parts of the World, is here shown fitted with the original " cruciform " design of bayonet.

Later production dispensed with the costly and time-consuming machining of the four grooves,

and the bayonets' "blades" remained in their cast round form until taken out of service.

In conjunction with the pre-production testing and design work on the potential new British service rifle,

twelve S.M.L.E. rifles were modified for testing the new design of shorter bayonet for the longer rifle.

Designated the No.1 Mk.II (Pattern 1926) bayonet, the twelve test rifles so fitted

trials No.1 Mk.VI rifles; no doubt to assist holding in trials.

One of the twelve rifles so configured resides in the collection of the Small Arms School at Warminster.

Closer inspection of the action of this rifle shows it to be a No.1 Mk.V body 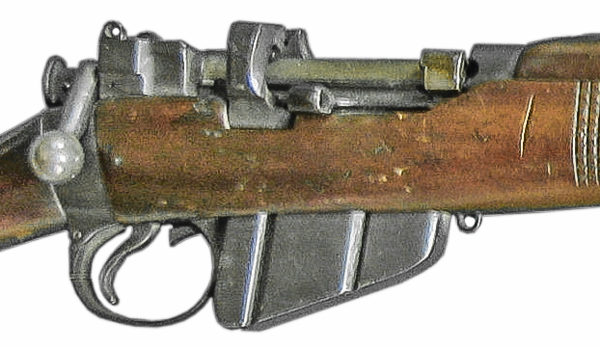 forward section of an SMLE nose-cap with the SMLE bayonet lug removed.

Indeed, the hole in its frontal plate has had to be notched to pass over the barrel's bayonet lugs on assembly.

The above arrangement is similar to the 1924 experimental rifle illustrated

on pg. 190 in Ian Skennerton's latest tome on the Lee-Enfield rifle;

although that rifle retained the front sling-swivel and its mounting lug.

Another rifle at Warminster is fitted with a prototype bayonet

assumed to be of a design mooted for the new 'long rifle'.

This locks onto an SMLE-like nose-cap from which the barrel protrudes about 3/4".

The rifle to which the bayonet is attached is labelled as

the "Lee-Enfield No.3 Pattern '14 - Shortened Experimental Model"- with folding bayonet".

This is understood to fold back underneath the fore-end.

Another contemorary experimental rifle with a specialist bayonet configuration

was manufactured by the Soley Arms Company.

Just six of the initial prototype rifles for the No.1 Mk.VI were built, later known as the "A" Pattern models.

These were the sole rifles to have heavily chequered bronze butt-plates.

Of the six, Rifle No.4 is held within the old Pattern Room collection, now at the Royal Armouries in Leeds.

Rifle No.2 has for many years resided in the collection of the Imperial War Museum, London.

Images of rifle serial No.2 are by courtesy of the Trustees of the IWM.

The rear-sights of these prototypes, and of the trials rifles, were cast with a simple battle-aperture for use,

at short range,when the long-range leaf was folded down.

This battle sight of these rifles is distinguished by a relieving milled cut,

to thin down the metal into which the aperture was cut.

This feature, on the aperture's forward face, is visible in the image below,

in which the leaf is in its upright position, and the battle aperture laying above the bolt-body.

The action body's inspection marks can be clearly seen, as can the lightening-cut in the long lug of the bolt-body.

Below: the rear-sight is folded down, and the battle sight in position.

Apparent here is the characteristic 'near ovoid' weight-reduction milled

cut-out on the LHS at the rear of the action's body side.

This feature was dispensed with on the introduction of the No.4 Mk.1 rifles.

Unusual for a rifle in a museum collection, the bolt-handle carries the "A" prefixed four-figure serial number

" A 0916 " more likely to be attributed to a "B" Pattern rifle than one of the six prototypes. 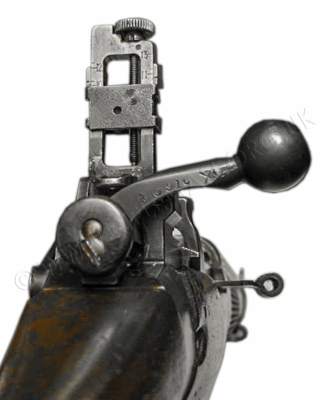 The LHS of the butt-socket carries only the prototype's serial number " 2 ".

held in the old Pattern Room collection at the Royal Armouries.

This latter rifle is fully marked up on the butt-socket as "ENFIELD" over "No.1 Mk.VI" over "2";

whereas the IWM example bears the serial number alone. 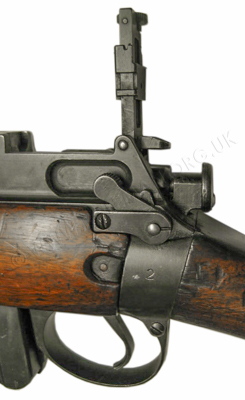 The serial number " 2" is also stamped on the wood furniture; here, on the LHS upper hand-guard to the rear of the barrel band.

This feature was dispensed with on the trials No.1 Mk.VI rifles, and all following production of the Rifle No.4 Mk.I.

On the toe of the butt-plate is engraved " FIR T309 " which has been crudely "scratched out".

Two further prototype "A" models reside in the National Firearms Collection at the Leeds Royal Armouries.

These were gifted as part of the original Pattern Room collection in 2000.

The chequered butt-plate viewed from the side. The butt-disc is unmarked. 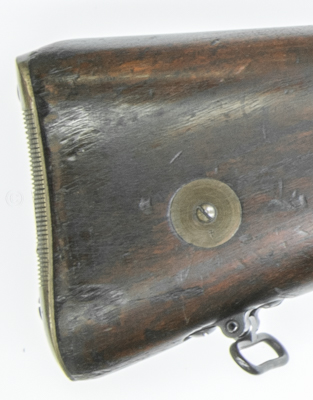 between that of the SMLE and the production No.4 rifle.

The whole of the nose-cap is rivetted to the lower front hand-guard.

This was likely altered as being vulnerable to damage, as well as more complicated than necessary. 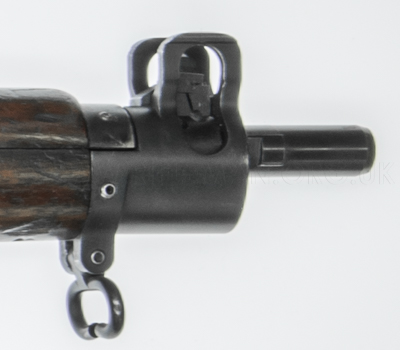 The second NFC example is a follow-on early prototype "A" Model,

that is formed by the separate protective caps on the upper and lower front fore-end handguards.

This example is unmarked, and is effectively a precursor to the trials rifle production run.

The butt-plate is no longer chequered.

But the rear-sight still only has four clicks to the turn, rather than the six-clicks of the production rifles.

Now we see the separate fore-end woodwork cappings, that are clamped together

with a much more cheaply manufactured and stronger plain steel band.

The fore-sight protector wings are now firmly clamped to the barrel.

This configuration will be very familiar to thousands of servicemen who served both during WWII and long after. 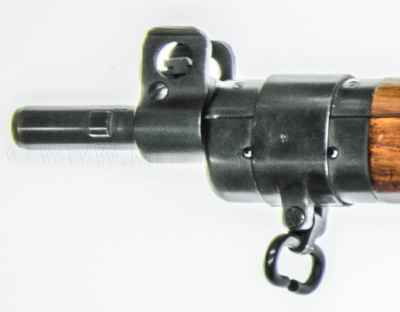 All these rifles carried a cocking-piece with a button similar to that on the earlier SMLE rifles, but offset upwards.

This component was altered significantly for No.4 rifle production, being more economically cut out from flat bar.

The magazine cut-off remains, having been an important feature on all Lee-Enfields

and Lee-Metfords since the late Nineteenth Century.

It was, however, often later removed during Factory Thorough Repair work (FTR),

from No.4 rifles, and even many of the earlier SMLEs, the slot in the action being left empty. 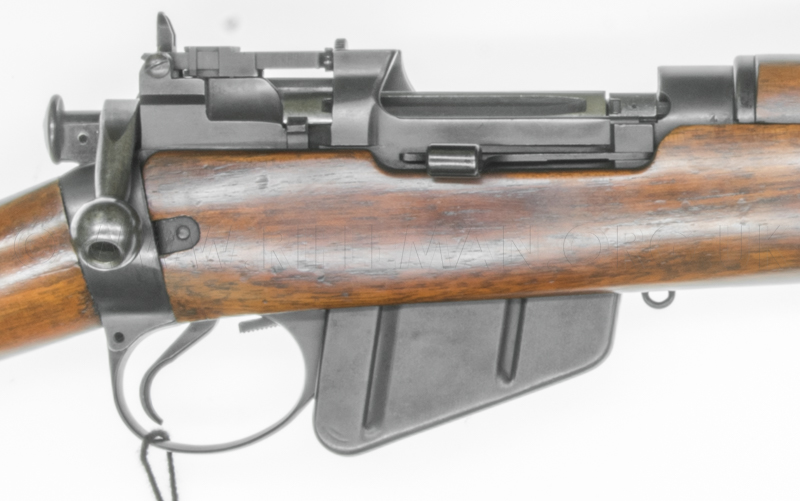 Again, the chequering is still present on the lower fore-end woodwork,

Here follows the "B" Pattern 1930 dated rifle, as shown in the first image on this page.

Below: this trials example of the rifle carries the interesting serial number " 27 502 A ", with the original rifle nomenclature.

with or without the suffixed "A" which is poorly stamped.

The numbers "27" appear to have been added later.

The rifle has not been "upgraded" to a No.4 Mk.I, and thus none of the original marks have been barred-out. 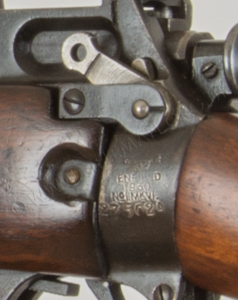 Both the right and left-hand sides of the action are shown in the next two images. 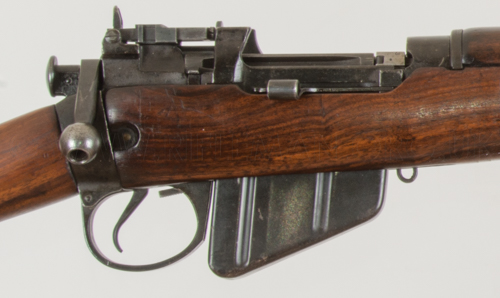 but the rear-sight is now the six-click to the turn production type. 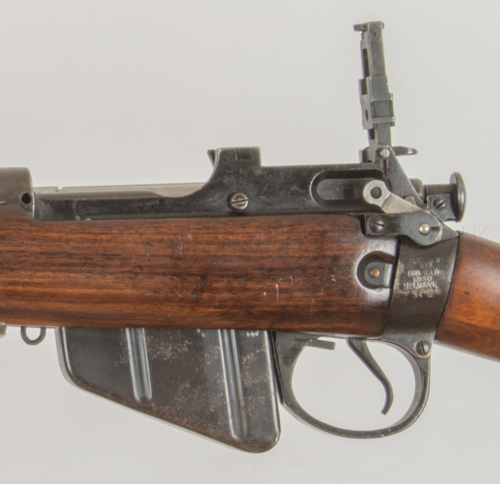 This has been converted to No.4 Mk.I, and the original A-prefixed serial number has been barred-out 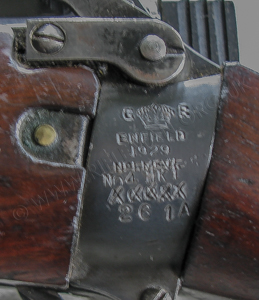 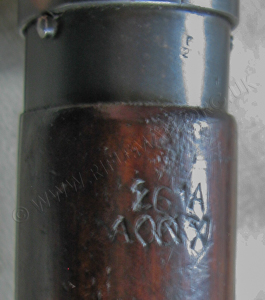 The chequering shows the signs of considerable usage over many years.

Such has been the purpose of the Small Arms School.