We start here with the earliest model - the slide or "pump-action" rifle.

The B.S.A. slide action rifle was the British equivalent of the Winchester, Remington and Fabrique Nationale - (FN) Browning pump-action repeating rifles. It was manufactured mainly with the tube magazine as shown in the advertisement below, but early in production, from 1923, a small number (probably a maximum in the very low hundreds*) of these rifles were produced with a box magazine. This version was then little advertised and is rarely come across today. The action is simply marked "Patent Pending" .

A pretty and well balanced design, the operating system was not as reliable as its well-proven American counterparts and sales probably suffered as a result, although prices in the U.K. were fairly well in its favour by comparison with the Remington and Winchester slide or "pump" action rifles, all being only a few shillings either side of £5.00 in 1925. The then newly introduced Browning pump-action rifle was entirely a different matter. This hit the market running at the incredibly competitive price of only three pounds and five shillings (£3.25). 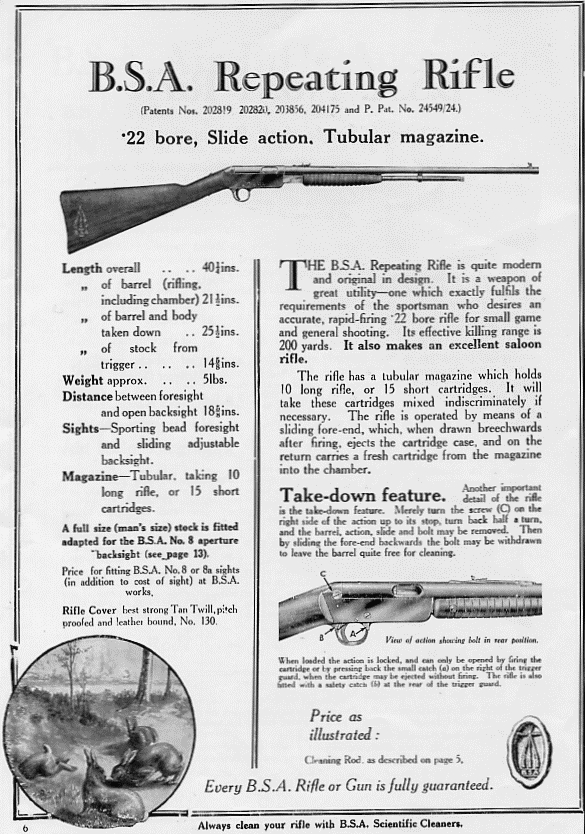 John Knibbs, in his book "BSA - The Golden Century", writes that the first of these rifles was serial numbered 252, and that only the first two hundred were of the magazine-fed version before the tube magazine was introduced just one year later.

However, we had noted that a number of these rifles are serialled in the 1*** range; with our own two archived examples being respectively 1032 and 1077.

The former of these has the "1"stamped with a different set of tools from the following "032". We are aware that this occurred with the earlier examples of other models of BSA production, and it has been rather assumed that batches of one thousand components were pre-stamped with the 'thousand' number, the remaining three serial number digits being added on final assembly. This would have precluded any confusion that could occur with the removal of any production that failed inspection.

Notwithstanding, we have been shown an auction catalogue lot entry for a box-magazine version, from about forty years ago, reporting a serial number of 521. Having often used that now defunct auction house in the past, we suspected an error, as we knew only too well that their catalogues carried a considerable number of typographical errors. Obviously, if it was correct, the entry would markedly add to the uncertainty of the production numbering of these rifles. This now appears to be the case, as an Australia-based colleague has pointed out a photograph on the 'Milsurps' forum confirming that another box-magazine-fed rifle is stamped with serial number 825.

The lowest of which we have become aware is s/no. 288. 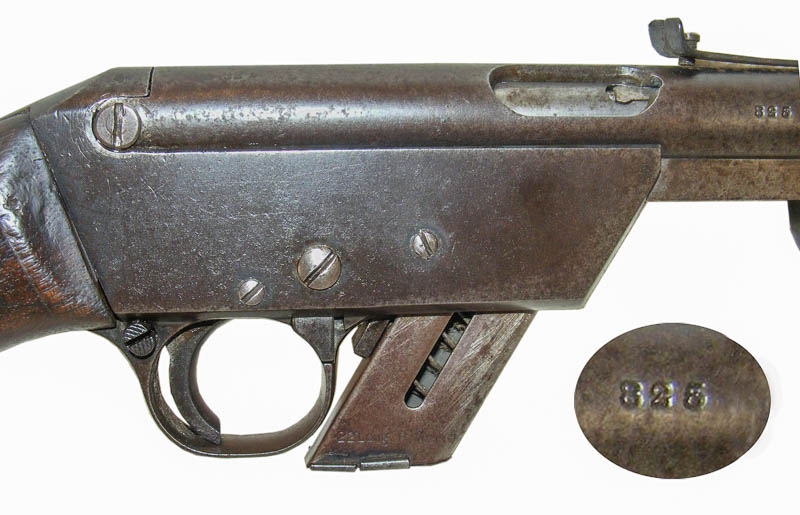 As John Knibbs holds the original BSA production records, it seemed likely that his understanding of a production number of only 200 was the definitive answer. Rifles that we had seen until recently led us to suspect that these left the factory having been serialled from 1,000, as none exceeded 1200. This did not explain the stated 252 starting number, but a typo or other recording error was suspected. With due deference to John Knibbs, who is immensely experienced and has always been thoroughly particular in his reporting of BSA matters, it now appears his assessment of this particular matter may have been mistaken.

If you know of rifles' serial numbers that would add to the available data,

do please let us know (with photographs of course). 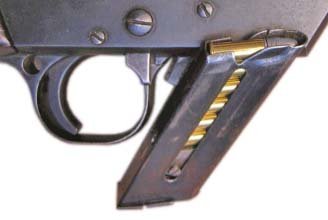 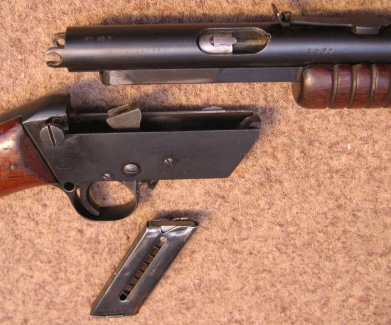 The barrel markings and rear-sight ....

The markings are similar to those of the War Office Pattern Miniature Rifle, i.e.,

We have been fortunate enough to obtain the original 1923

for this box magazine action.

The following year saw the introduction of the Tubular Magazine Model, of which around 8,000 were manufactured before the commencement of the Second World War* brought such production to an abrupt close. The manufacture of this design was destined not to be reinstated post-war, effectively leaving the market for slide-action rifles clear for Winchester and FN (Browning).

The rifle above has been professionally fitted with a sophisticated pair of quick release offset claw mounts for a German manufactured "Gnomet" telescopic sight (not illustrated), and the muzzle has been threaded for a sound moderator - the knurled cap at the muzzle being the screw-on thread protector for when the silencing system is not in use. 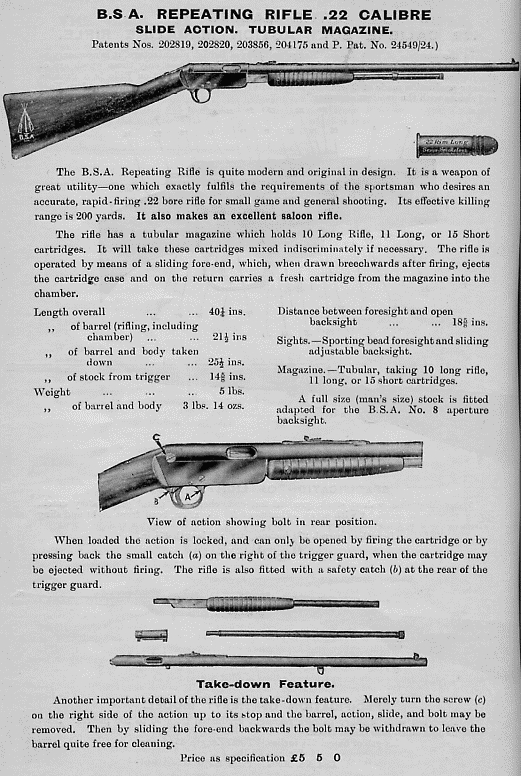 Below: the patent no. of the main production version with the tubular magazine 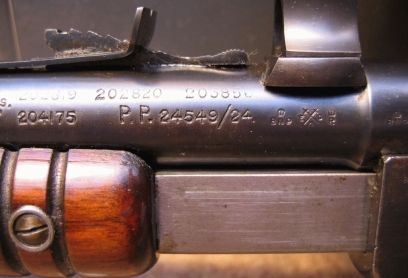 Click the patent drawing below to view the complete patent

Below: the tube-magazined rifle shown taken down,

We have not seen one of these in the flesh, but there are photographs of an example of a tubular-fed rifle

with a finely engraved action, chequered wrist and fore-end grip, the latter being of an diameter significantly

enlarged from the standard product; the rifle being BSA's Special De-luxe version, such as was available with

their contemporary models of Martini small-bore rifles, and even the War Office Pattern Miniature Rifle.

For those interested in the rifling of the pump-action models,

here is an image of the whole bore length derived from the stacking of a series of 44 images.

Viewed from the muzzle. 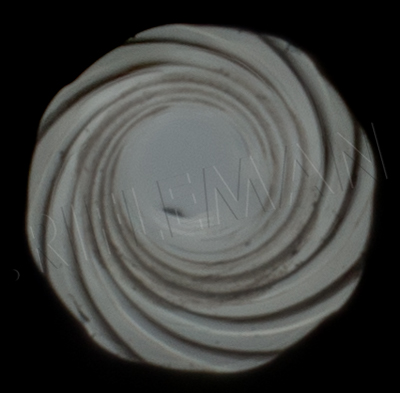 It will be seen to be 8-groove, right-hand twist, with lands little wider than the grooves.

It is interesting to compare this with the wide-groove/narrow-land of the very accurate rifling of the earlier Model 12 target rifle,

of which a BSA drawing is shown about half way down that page.