1. The course is designed to give practice in firing at :‑

2. On account of the high penetrative powers and the great range of the anti-tank rifle, safety considerations on many range areas prohibit fire with •55-inch ammunition. Part I of the course is, therefore, designed to overcome this difficulty. The size of the target, its speed, and the range, are reduced to AT those of the normal.
Part I is also intended to enable men to practise aiming and swinging under the simplest conditions before they fire .55-inch ammunition for the first. time.

4. On anti-tank rifle ranges where targets are placed in the open, the following system of signalling will be employed :--
The target will be so placed that men in a pit to a flank can see the shot-holes. At the firing point there should be a  replica target (6 inches square) which can be made under unit arrangements. Loth targets are divided into I-foot squares (see Figure 1). These squares will be numbered from left to right, and from bottom to top. Thus, on the arrival of a shot on the target, the markers in the pit notify the firing point by telephone of its position by indicating, on the lines of an ordinary map reference, the square in which the shot-hole lies. If, therefore, a shot arrives on 'the target at " X " (see Figure 1), the marker merely telephones " Square 34 ". The position of the shot is then plotted on the target at the firing-point.
5. The ultimate aim must be to train all men ,in firing the anti-tank rifle. For the immediate future, units will train not less than three men for each anti-tank rifle on their establishment. The best •303-inch rifle shots should be selected. Practice in aiming off and swing can be obtained by using the normal traffic passing along roads in the vicinity of barracks as aiming marks. 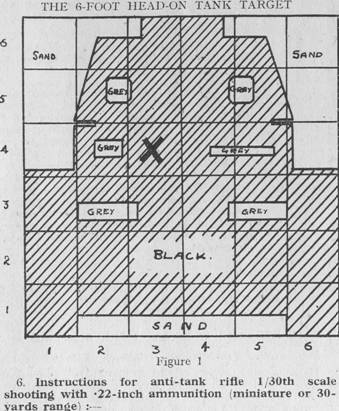 i The apparatus described in paragraph 7 has been designed to provide practice at moving targets on a 1/30th scale range. It may also be used in connection with a 30-yards range

ii. Au improvised 1/30th scale range for use on service, or when the recognized 1/30th scale miniature range cannot be provided, is described in paragraph 8.
iii.• The following points should be noted :‑

The length of the target plus scoring areas is thus 12 inches, and should be in black on grey paper 18 inches long by 10 inches deep on strawboard.

i. Description of the apparatus. (References are to Figure 2)
The apparatus consists of two uprights (A) of convenient height, slotted at the top to carry a composite board (B), about 12 feet long, on edge. The edges of this board are made to form a groove (C) in which travels a runner (D) formed of a piece of hardwood and shaped as shown to travel smoothly in the groove. To the sides of this runner are screwed two pairs of 3-ply brackets (E) each carrying a tin, clip (F) which holds the target mounted on strawboard. Two cords are
attached to hooks (G) on each side of the runner. These pass round hooks (H) at the end of the runner track and are carried back behind the firing point to two small winding drums (not shown in sketch) as illustrated at -Figure 4 of Plate 65 in Small Arms Training, Volume V. One edge of the board forming the runner track is straight so that when the runner is pulled along by the cord the target travels on the level. The other side is shaped as shown in the sketch so that by reversing the board and placing the runner on the shaped edge the target is given an undulating movement.

With uprights 4 feet high, the target is at a suitable height for firing in the standing position in the trench or in the prone position on the firing platform of a miniature range.
When using the apparatus on a 30 yards range with the target in the ricochet pit it may be necessary to have longer uprights, but, to avoid undue height, it should be so arranged that the bullets hit the rear slope of the ricochet pit and not necessarily the bullet catcher.

The apparatus is provided locally at a cost of approximately £3 per set.
Strawboards and paper for the targets will be included in D.F.W.C.C. No. 967/1938.

(a) Miniature ranges
Any existing Miniature Range of a width exceeding 16 feet should be suitable, if the protection specified in Small Arms Training, Volume V, 1931, section 29, paragraph 18, is provided. The general regulations laid down in Small Arms Training, Volume V, 1931, section 30, should be complied with.
In a range 24 feet wide the target may be placed 15 yards from the trench. In narrower ranges, to avoid possible damage to the side walls, the target will require to be nearer the stop butt and the firing point moved correspondingly forward.

(b)) 30 yards ranges
Provided the rear slope  of the ricochet pit is correctly constructed to prevent ricochets there should be no increased risk. The moving target- will be included, in the category of targets approved for use on 30 yards ranges. (Small Arms Training, Volume I, Pamphlet No. 1, 1941, refers.)

iv. Use of the apparatus
Only very little practice is required to cause the target to travel smoothly at approximately 1 foot per second, and the range is so short that the effect of a small discrepancy in the speed of the target on the result of a shot is negligible.
Only one shot should be fired at each run of the target,, but as shots can be easily observed from the firing point a firer can fire a series of shots, each of which can he criticized, without the targets being changed.

The materials required are as follows :‑

The two lengths of wood are firmly embedded into the ground about 10 yards apart and the wire or telephone cable tied tautly, as shown in drawing (Figure 5).
Staples are driven in as shown at the three places marked (a) to act as guides for the towing string.
The target (1/30th Scale Silhouette Tank) as issued is clipped into the two spring paper clips, the two 3-inch nails are bent as shown in drawing (Figures 3 and 4) and passed  through the holes in the clips, and are used to suspend the target from the suspension wires.
The spring is then tied to the centre of the nails, passed through the staples and back to the firing point. The target is then drawn across the suspension wires as desired. To change from the direct crossing wire (top) to the diagonal wire (bottom) remove the nails from the clips and attach to diagonal .wire. The string must be passed through the bottom staple when using the device for diagonal movement. 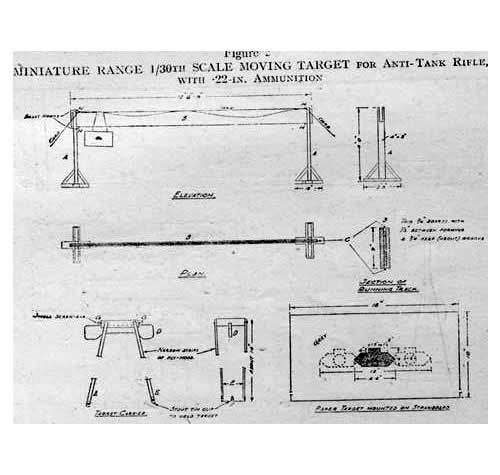 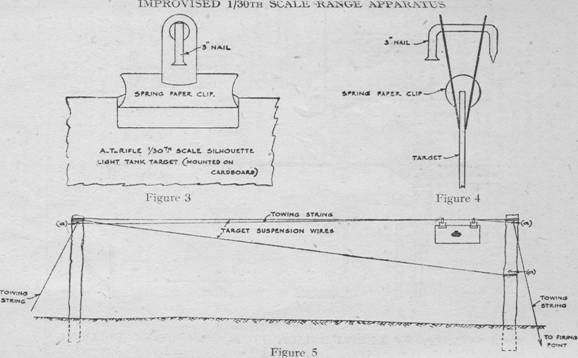 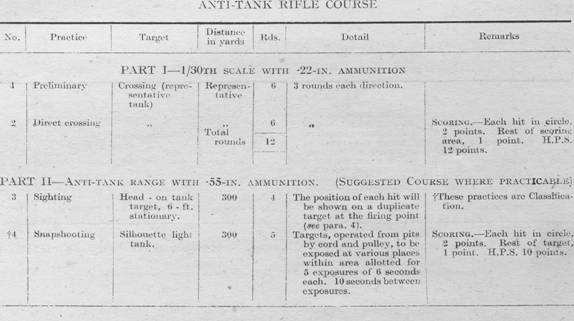 Subsequently, rubber model tanks were produced for use as crossing targets on miniature ranges, with practice made with a BSA Gunlaying teaching device.The Birmingaham Small Arms Company made at least two sub-calibre systems of this type utilising the basic design of their tap-loading air-rifles. The earliest known system was in .177 calibre, produced for artillery gunlaying practice, and appeared early in World War One, during 1914, being supplied to the New Zealand forces.

A more commonly known and much later version was for the 2 inch gun, such as that fitted to the Valentine tank. There is also known to have been a version intended for the Boys Anti-Tank Rifle, but we have seen neither hide nor hair of this device, and it may never have made it into production.. If you know anything of it then do please contact us.

The miniature-calibre range layout was apparently " larger than a tennis-court", and took the form of a triangle with "the gunner at the apex" and a wired pulley system which traversed the model tank across the base of the range's triangle.

Two models of these post-WWII rubber tanks are shown below. The larger model - left and top right - is five inches in length, and the smaller below is three inches; this presumably afforded both alternative relative tank sizes and range distance representations. These items were know to be in store in the mid-1950s, and could well have still been in use much later.

Below in video clips, are three training films made by Walt Disney during the war, at the expense of the Canadian Government,

and therefore the latter's property; and a 1940 newsreel of the Boys Anti-Tank rifle in training use.

CLICK ON EACH BOX or LINK BELOW TO START VIDEO