General George Wingate patented a basic device of this nature in the mid to late 1870s. The design was several times modified through the years, no doubt due both to improvements necessary and to permit use in various rifles, and finally ended production in the hands of the Hollifield company in 1927.

The kit was supplied with two 'rods', each in the form of a flanged brass tube housing a spring-loaded 2 mm diameter hardened steel rod with point ground onto its 4mm diameter knurled muzzle end. One of these tubes was the full length of the barrel and chamber and the other only the length of the barrel rifling and leed. The second, shorter unit, required the dummy cartridge

to be chambered for the striker of the rifle's bolt to hit the after end and project the rod onto the target at a distance of around six inches from the rifle muzzle. The longer unit could be used without the dummy cartridge and was intended for basic, single shot, practice.

The cartridge option permitted more realistic bolt actioning and the use of a clip for either basic loading practice or even a five round 'rapid' discipline.

The tube is simply held in the rifle barrel by dint of a one inch long split section near, the muzzle, which is sprung open slightly to maintain pressure inside the bore. There is no other location; the instructions advise the gentle opening up of this split should the tube become slack in the barrel! 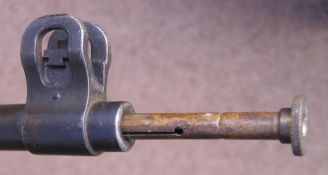 The TARGETS were provided in a booklet with perforated, tear out, page sections. These were for 50 yard or 100 yard range representations.

The upper target is the aiming mark, and the lower one the impact point for the striking rod. The height between is one and one-sixteenth inches, being the height between the sight-line and the rifle bore.

Below, the left image is of what is simply a representative spotting target for instruction. It is pasted inside the box lid and has a handwritten instruction that it is not to be fired upon! Presumably written shortly after someone had!

The other two images illustrate how the box can be hung on a wall or board at any suitable height for prone, kneeling or standing practice. The target carrying block is of hard rubber and can be slid up and down, within the box, for fine adjustment. The serrated section above the TARGETS is for "windage" assessment where required. 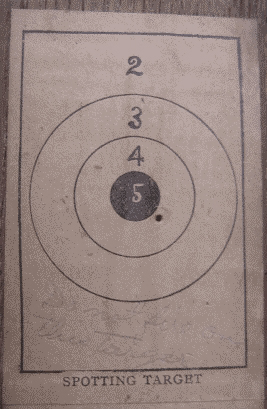 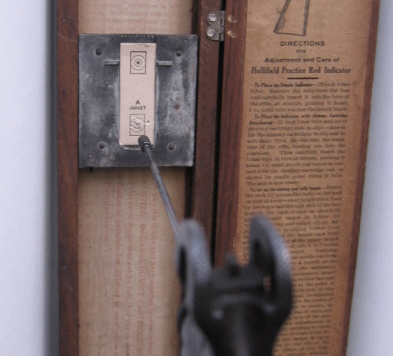 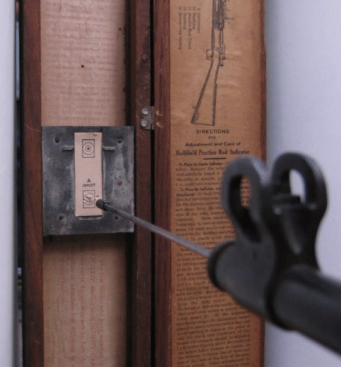 The two instruction sheets, showing their age, are copied below.

One is pasted into the bottom of the box, and the latter one is pasted to the inside of the hinged wooden lid.

Two practice rod devices, equivalent to the Hollifield Dotter, were marketed by A.G. Parker and Parker-Hale between the two World Wars.

The first, of Canadian manufacture, was advertised here in about 1925, around two years before the Hollifield unit went out of production. 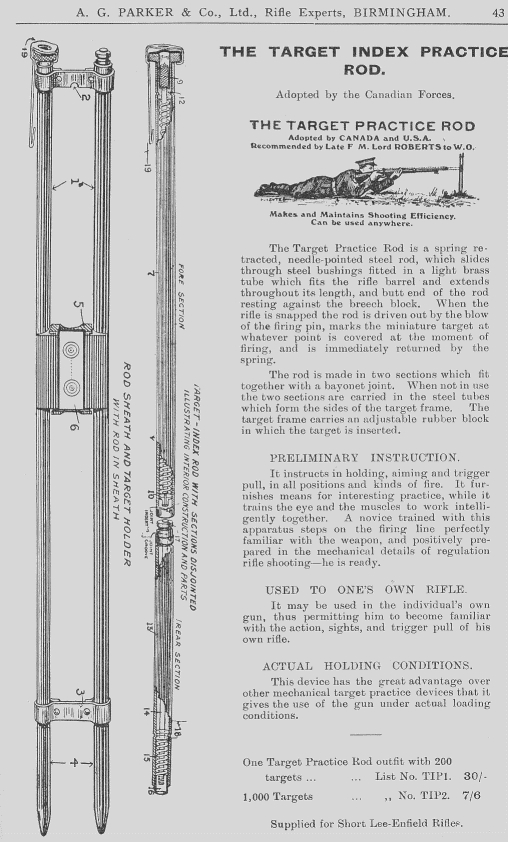 Below is their advertisement for the same unit - under Parker-Hale's name - still going eight years later in 1933. The advertisement now carries what appears to be a facsimile of the note of recommendation made by Lord Roberts ( founding president of the Society of Miniature Rifle Clubs, who died in 1914 whilst visiting his troops on the Western Front), presumably part of an internal memo within the military, later passed to Messrs. Parker or Hale or the manufacturers in Canada.

The handwriting can be compared with that of a letter written by Roberts to Mr. Hyam regarding the setting up of the S.M.R.C. 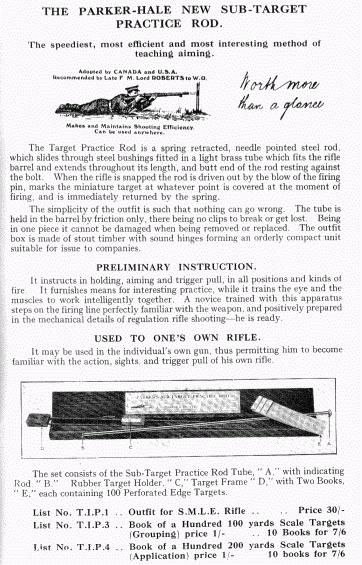 It is amusing to note that, even without prior knowledge of such patented equipment as these practice rods, man's ingenuity continually provides for their re-invention - even informally. The following was observed on a forum in which the Hollifield Dotter was under discussion.

"I never realized there was a commercial application of this device. While shooting competively in the Navy, I used to take a common wood pencil and place two bands of 1/2" masking tape around the pencil until the pencil and tape was a sliding fit in the bore of the pistol. Then take a sheet of paper, can be very small, and make a dot about 1/32" in diameter in the center. Tape the paper to the wall the same distance from the floor as the pistol muzzle in a natural stance you use. Move toward the target until the muzzle is about 1" from the target. Place the pencil in the bore and cock the hammer, in my case a 1911 A1 Navy 45. Tip the pistol muzzle up to seat the eraser end towards the firing pin. Now sight the target as you would at a standard NRA 50 yd bull. Dry fire the shot and call the shot. The pencil will be propelled down the bore by the firing pin strike. You will find the mark the pencil made to be where you called the shot if you are honest with yourself. This practice works wonders for your marksmanship."

Should you not already have done so, please also view the pages detailing