TARGETS such as this, from a large series, were used both to train the individual soldier in field firing,

and to train the N.C.O. or Officer in fire direction.

Below: a 1916 advertisement for the Hill-Siffken Company's products. 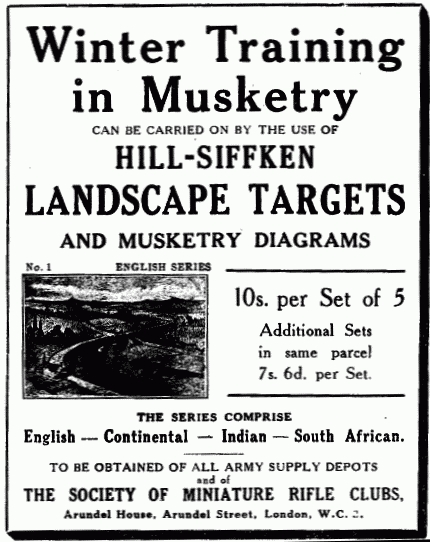 Below is a First world War representative Landscape target

by the Hill-Siffken Company dating from between the wars.

Actual sizes of these target scenes are of the order of five feet wide and vary in height,

The system then operated is, in modified form, still in use.

Early instructions for harmonized firing can be read

below in an extract from the Infantry Training Manual

(submitted by Roy with our thanks)

" SECTION 9.--FIRING WITH HARMONIZED SIGHTS
Aim
1. To give NCOs practice at giving fire control orders, and men at recognizing targets and shooting at them.

Preparation of the rifles

3. Set the sights for harmonized firing (1,400 for No. 2 Rifles, "H" for No. 8 Rifles), and get skilled shots to fire at the aiming marks at the bottom of the sky screen, and go on altering the sights until they put at least two consecutive shots between the horizontal lines at the top; record the rifle numbers and sight settings on a board to be kept in the range, and do not allow any further adjustment of the sights.

5. The reason for harmonized firing is to avoid damage to landscape targets.

Conduct of a shoot

6. Put the section in position, and get the section commander to organize an arc of fire. With a pin, point out the target to the section commander on the replica; he goes back to the section, and gives a fire control order; the section fires (two or three rounds are enough). Cover the sky screen, and get each man to show you where he aimed.
7. To assess fire effect, hold the measuring rod vertically (check with the plumb line), with the bottom on the target. Make a mark on the screen at the top of the rod, and put the centre of the scoring rectangle on the mark; shots in the small rectangle count two, in the large rectangle one." 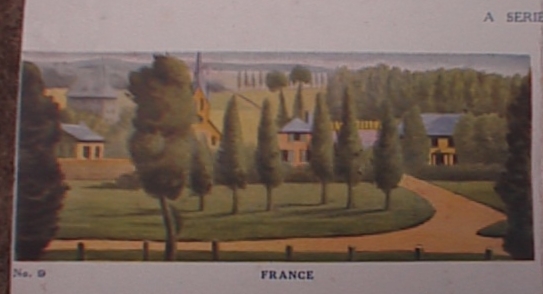 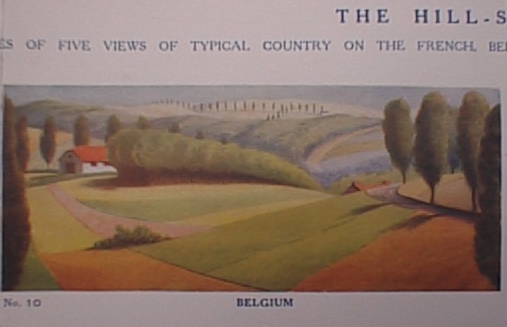 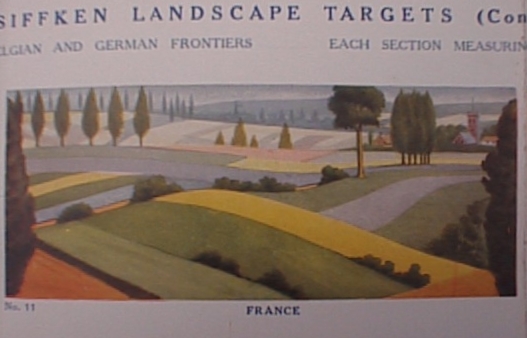 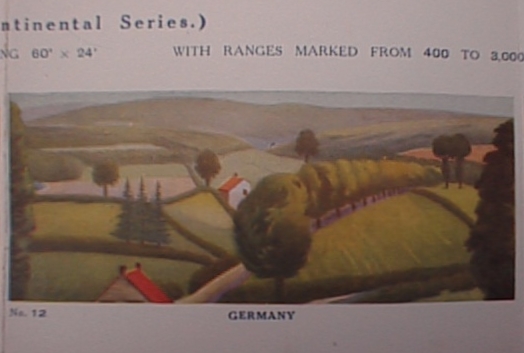 Below is a photograph of a Musketry Class of 1915 taken with a Landscape target utilising the "Continental" Series sections nos. 9 & 10, probably at the completion of a course. No.9 was representative of a 'actual country in France' and no.10 of the same in Belgium. The sections were designed to be approximately linked side by side in any order, by virtue of the half pine-tree printed at each side of each target, as shown in use in the photograph below.

The rifle in use is the Charger Loading Magazine Lee-Enfield ( C.L.M.L.E.) which had, by 1915, been technically superseded by the rifle Short, Magazine, Lee-Enfield ( S.M.L.E. ) introduced in 1903; but wartime demand for the new rifle far outstripped supply in the early years, and the " Long-Lee", as the older rifle became fondly known, was still very much in play, particularly for training purposes.

Two of the rifles can be seen fitted to "Aiming Stands" used to permit a student to aim the rifle at a target and stand back to allow the instructor to then view the quality of aim of the student. Corrective instruction could then be given as necessary. 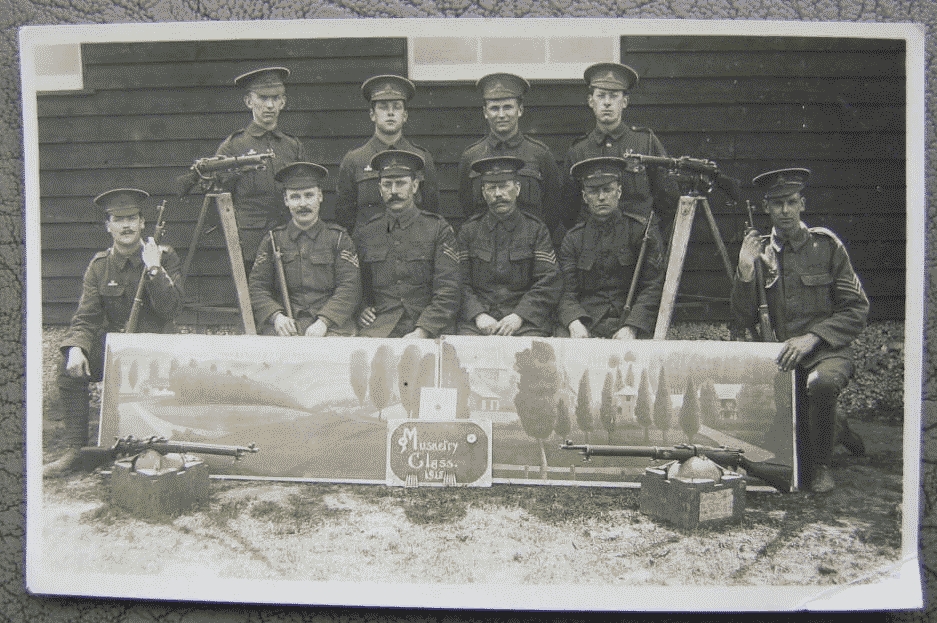 The various Volunteer or Territorial Battalions of the Royal Fusiliers in London,

used Landscape targetry between the two World Wars and during the latter 1939-45 War.

Below is a photograph, taken in 1932, of a Company "Field Firing" Team stood between

and the printed landscape backing; a very elaborate setup altogether.

Below: in 1939, this was a miniature landscape range at the Handel Street Drill Hall, the London Headquarters.

.. and the same arrangement was used, as well as for rifle training,

for machine-gun instruction, although the setup appears rather 'posed'.

The team are 'shooting' on the "English Series" of Hill Siffken targets (sections 1,2 & 3)

Other scenes and notes will be added before too long

A.G. Parker & Co. Ltd, and latterly Parker-Hale, advertised the Hill-Siffken targetry from the early 1920s through until the Second World War (1939-45). Even the advertisement remained the same, the only difference being an increase in the price of the targets of 2/6d ( half-a-crown) for a set of 5. In 1925, these had been 12/6d (twelve shillings and sixpence - or 62½p in current parlance). It is interesting to note the form of the measuring rule, with an integral plumb-line, used to assess scores by relating the hits on the "sky screen" to the aiming points on the target upon which fire had been directed.

A further system of landscape targetry was that designed by an officer of the name Solano.

We show below a photograph of the layout taken from a 1912/14 manual on Musketry Instruction & Miniature Range Shooting,

authored by Quartermaster Sergeant D. James of the School of Musketry, then at Hythe in Kent.

Below are examples from the Middle East series and the Continental series; 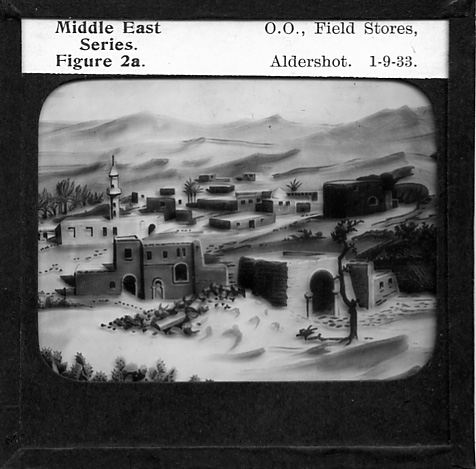 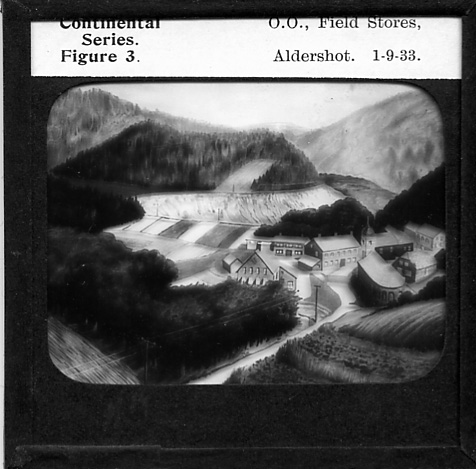 By 1937, many of such slide images used original photographic transparencies rather than artist drawn representations.

Equivalent Landscape Targetry systems to those shown on this page

are still in use today by the Regular, Territorial and Cadet Forces for training.

which has been run for many years, is also of particular note.

Below: one of a 1989 series of four Country Life targets is shown below: 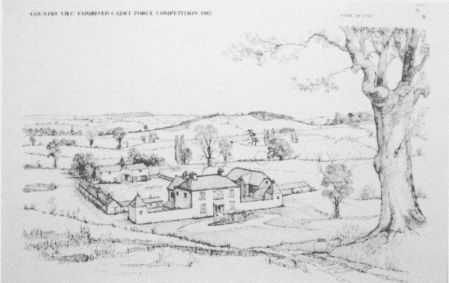 Since the mid 1990's these targets have been printed in colour.

More sophisticated systems have also been developed, using film projection onto screens and,

of course, the inevitable computer generated scenery and scenarios.

A replica 1918 period landscape target setup has been produced for use on outdoor small-bore ranges.

It was first used informally in an open meeting at Basildon, Essex

and subsequently at Bisley historic rifle meetings and in conjunctiion with classic miniature calibre rifle exhibitions.

The arrangement is shown above in Summer 1999, with two Lee-Enfield No.7 and two No.8 rifles being made available for those who entered into the main competition to try their hand on an informal basis.

It is an unusual and popular event because teams of three or five can enter the competiton (with two/four shooters and a spotter/observer).

Of the pair of competitors above, the gentleman on the left is using his own S.M.L.E. No.2 Mk.IV* and on the right one of the No.8 Lee-Enfields .

The spotter holds the Fire Control instruction sheets giving the team their four targets for the detail. Only he has access to the Signalling telescope. He is required to pass fire instructions to his team of firers using typical methods involving reporting representative ranges (dependent upon the height of the aiming point on the landscape target), and 'Clock', 'Finger' or other directional instructions from pre-advised notable landmarks on the target. There is obviously a tight time limit for the specified number of shots to be fired on each of the four targets dictated; thus only a combination of accurate, succinct and clear instructions, combined with accurate shooting , will win the day.

Left: is shown the method of using a plumb wire topped by a grouping gauge to score the hits.

The pointer at the base of the plumb is placed over the specified aiming point on the landscape target, whilst the grouping guage falls over the bullet strikes on the "sky screen" approximately 27 inches above.

To the right of the picture can be seen the sighting target for zeroing the 'harmonised' sights.

The lower black rectangles being the aiming marks, with the hits being adjusted to the twin rectangles above - representing the dimensions of the group scoring gauge.

A second 1940s style apparatus has been used at Bisley for the H.B.S.A. and Historic Small-bore Rifle Meetings

Below is a miniaturised version of the 1899 Military fullbore targets depicted at Bisley.

It is designed for modern use on a fifteen, twenty or twenty-five yard range.

Copies may be obtained by contacting the editor

The target is simply a representation of the original for use on a smallbore range with early training rifles.