The Swiss nation has always held the sport of shooting in high esteem. Those partaking of shooting sports, of all disciplines, are understood to be perfectly normal, socially acceptable and patriotic persons, rather than the near pariahs with violent or warlike tendencies that they might unjustly be considered in some quarters of the World. The Swiss Government has, for decades, considered that every national should take part in the sport with a view to ensuring the security of the nation in the event of any outside aggression. A significant resulting additional benefit to this train of thought has been the internal security of the country. All young Swiss subjects are brought-up with firearms, and develop the associated discipline borne of correct training and an everyday familiarity with both military weapons and target arms. National Service, which each young adult is required to undertake, furthers this character building and the individual's self discipline. The nett profit from this, apart from the Swiss nation's acknowledged ability to remain uninvaded for centuries past, has been the lowest level of firearms crime almost anywhere in the world, (their crime statistics in this area are the best of any nation where firearms ownership is readily available to the population - and far better than some places where it isn't!). Nationals involved in training, or otherwise serving in the various aspects of the military and volunteer forces, may keep their service arms at home so that they are readily accessible both in an emergency and on the frequent occasions that the opportunity arises to shoot for target competition or training purposes. No better example of how firearms possession and public safety can go hand in hand exists anywhere. It is never simply what you do that counts, but the way in which it is done!

The Schmidt-Rubin rifle has been the main-stay of the Swiss military since the Nineteenth Century. In later guises it is today still to be found in service of some manner or other, even if only as a semi-retired

Small-bore conversions were made, both of the turn-of-the-Nineteenth-Century long rifles and, earlier in the Twentieth Century, of the carbines. We show examples of both on this page. ( Long rifle images to follow).

Below are images of a .22LR rimfire converted 1911 carbine. The rifle therefore retains the "mighty" bolt of the full-bore parent arm; a straight-pull arrangement not dissimilar to that of the Canadian Ross rifle. ( See the straight-pull Ross Cadet Rifle). For anyone unclear as to the meaning of the term "straight-pull", it simply refers to a bolt opening and closing system in which the bolt handle is merely drawn or pulled straight backwards and pushed forwards to respectively open, or to close and lock, the action for loading. The more usual of bolt-actioned rifles require that a turning motion be applied, to the bolt-handle, to lock and unlock the bolt to to or from the action on opening or closing. The Ross rifle and the Swiss Schmidt-Rubin rifle are the most well known designs of this nature.

With both the Schmidt-Rubin and Ross full-bore service rifles, the main body of the bolt has a machined part-helix which permits the fore and aft movement of the bolt within the action, whilst at the same time imparting a rotating motion to the component of the bolt which spins to lock the action for safety in firing. With the Schmidt-Rubin, an outer sleeve over the bolt-body carries the locking lugs, the whole sleeve rotating about the bolt-body and bolt-head components. The Ross utilises a similar technique, but the forward threaded locking lugs are part of the bolt-head, which itself rotates, engaging with an interrupted internal thread in the breech of the action. The small dimensions of the bolt for the Ross Cadet rifle do not permit such complexity, and that rifle, whilst emulating the straight-pull of its big brother, has a simple locking arrangement possible by virtue of the low pressure combustion of a small-bore rimfire cartridge.

This model appears to be a modification of either a 1911 carbine or of a shortened 1911 long rifle.

The rear tangent sight has been moved back in front of the barrel reinforce,

and the resultant carbine's configuration offers a passable representation of the Model 1931 - or "K-31"- carbine.

The rifling of the Schmidt-Rubin is of typically Swiss precision manufacture.

The condition remains fine, and the polish in the bore is good enough to reflect an object in the photography studio in front of the muzzle.

The bore is not as tight as other examples shown on this website, evidenced by the still clearly visible lubricant indentations around the periphery of the bullet used as a slug.

These indents are considerably more compressed and less apparent in many other rifles.

The slug's smoothness literally reflects the excellent finish of the bore. 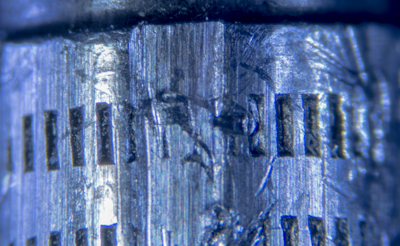 Regrettably, the groove and land width measurements were taken before this slug was imaged;

The extraneous marks in the land groove (at the centre of the image),

and on the edge of the bore's groove impression, have been left by the vernier calipers.

by the barrel's rifling land has not even eliminated the lubricant indentations, as would more usually be the case. 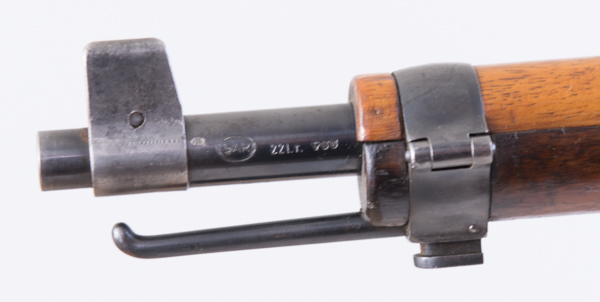 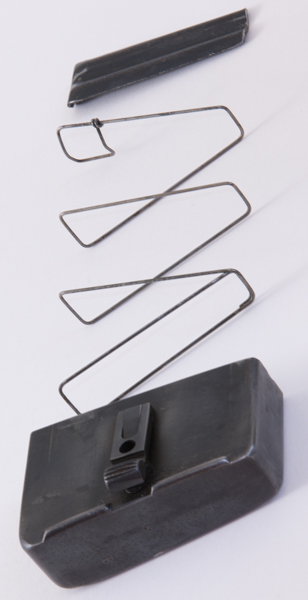 Bottom; the 1911 (Karabiner 1911) carbine converted, by sleeving the barrel, to .22LR rimfire for small-bore training use.

Below: the carbine - LHS 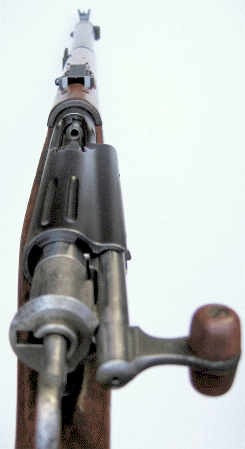 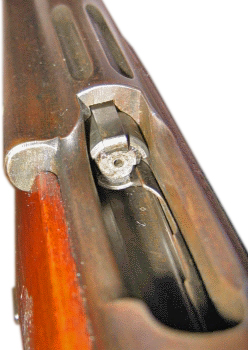 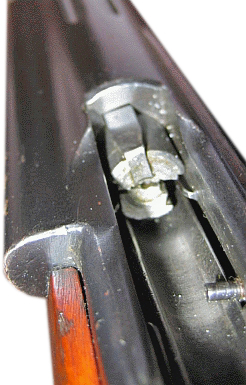 Below: the firing-pin (striker) arrangement.

The rear-sight, from above, showing the original full-bore calibration in metres

and the Left and RH sides, the same! No recalibration has been applied for the miniature calibre ammunition. 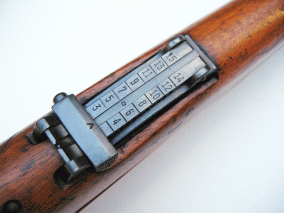 An unusual air-rifle adapter unit was manufactured by Hammerlil for the K31 Schmidt Rubin.

The rifles above were obviously engaged as training weapons for the various full-bore service models, such as the

The last of the line of this straight-pull design was the ZfK 55 rifle, which was also used mainly as a sniper's weapon.

They were manufactured between 1957 and 1959 at Eidgenoessische Waffenfabrik, Bern, Switzerland.

This particular rifle, in the serial number range of 3***, was produced in 1958,

the year in which were manufactured almost two-thirds of the total production of 4150.

Being of 7.5mm calibre, the rifle chambers effectively the same Eduard Rubin's designed 7.5 x 55 (GP11) cartridge as its predecessors.

Illustrated below with the separate 3.5 x magnification telescopic sight on its mount, and with its transit tin case.

The mounting blocks on the rifle are integrally machined as part of the left-hand side of the receiver.

With an overall length of 47.55 inches, the rifle weighed 13.5lbs with scope attached, and without ammunition.

The slim-line magazine, which can be removed, has a capacity of just six rounds.

The fold-down bipod pivots from beneath the front of the action, and is of considerable height.

The rifle is thus unusually finely balanced when the bipod is deployed, and at a height from the ground that suggests best employment

over a ridge of ground rather than prone on a flat surface.

Of not dissimilar appearance to the K31, the ZfK55 differs with its half-stocked wood furniture with a pistol-grip, and has only four common components.

Instead of the upright configuration of the K31's action, the ZfK55 rifle's action is cleverly tilted.

permitting clean ejection of fired cartridge-cases clear of the underside of the 'scope.

Below: the scope viewed from above.

The turrets are calibrated in single figures denoting hundreds of metres.

The rear knurled adjustment knob is for parallax focussing of the "pointed post and split horizontal bars" reticle,

The tangent rear-sight leaf is calibrated from 100 to 1500 metres.

The barrel is fitted with a flash-hider that probably also has a small recoil-reducing effect; a typically complex Swiss component of thorough design.

It is fixed in position by a locking wheel that rotates withing the fore-sight block.

Even without the flash-hider, the ZfK55 barrel is slightly heavier than that of the K31.

The ZfK 55 rifle was taken out of regular service in the 1970s, with the introduction of the SiG 500 series of automatic rifles.