A Ross "Cadet" rifle is shown below compared with its 'parent' M1910 service rifle. The word 'parent' is used loosely in this context, where perhaps 'uncle' would be more suitable, since the cadet rifle bears a similar relationship to its big brother as does the 1906 Pattern War Office Miniature rifle to the S.M.L.E (Rifle, Short, Magazine Lee-Enfield) .303 British service rifle - in that the full and miniature versions of each carry no common parts.

Shortly before the .303-inch calibre Ross Mk.III Service Rifle went into production in November 1912, Ross had produced his Cadet Model in .22 rimfire. In that year, the Canadian Government gave the Company an order for 10,000 of these rifles, and delivery commenced in 1913 to the Militia, continuing for three years.*

Many of these rifles subsequently found their way to the United Kingdom, in both military and sporting guise.

For anyone unclear as to the meaning of the term "straight-pull", it simply refers to a bolt opening and closing system in which the bolt handle is merely drawn or pulled straight backwards and pushed forwards to respectively open, or to close and lock, the action for loading. More usually, bolt-actioned rifles require that a turning motion be applied, to the bolt-handle, to lock and unlock the bolt to to or from the action on opening or closing. The Ross rifle and the Swiss Schmidt-Rubin rifle are the most well known designs of this nature.

The full-bore .303in Ross M10 rifles were fitted with the Ross aperture rear-sight as also used on the Cooey adaptation of the sight for use with a S.M.L.E. when converted to an Enfield No.2 .22RF training rifle. An aperture rear-sight was therefore fitted to the Cadet training rifle. To permit the use of the rifle with open sights, the aperture sight could be rotated through 90 degrees out of the way. 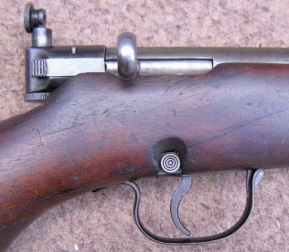 The pressel of the bolt release lever can just be seen in front of the trigger guard where it meets the woodwork; more of this anon.

Below: several variations of fore-sight have been seen; a ramped barleycorn, a tunnel foresight, and this example which has been fitted with the swivel-hooded fore-sight from a British War Office Pattern Miniature rifle.

The rifle can be easily disassembled by undoing the rear barrel sling swivel/bedding screw and the screw holding the nose-cap onto the fore-end woodwork. 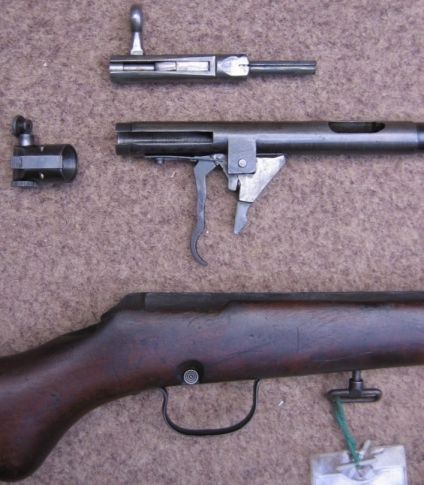 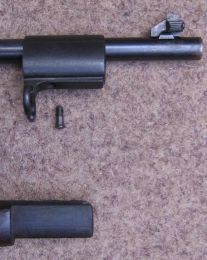 The disassembled bolt and trigger/bolt-release mechanism are shown below. 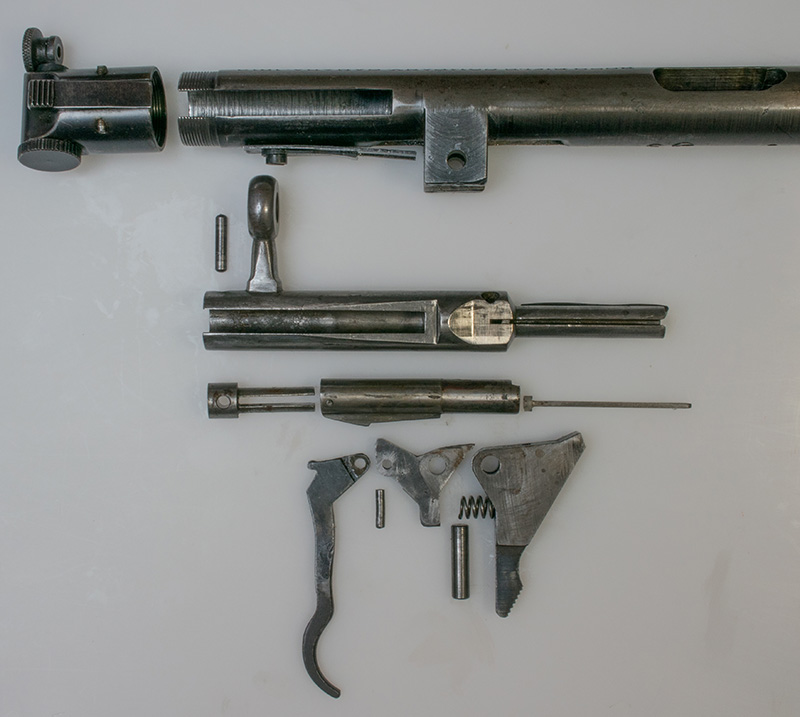 N.B. - I have been advised by a reader that his, and the rifles of other collectors known to him, can be fired and the bolt drawn back to reload without needing to press the bolt release lever in front of the trigger guard.   If your, or anyone else's, rifle has the bolt-release lever fitted at the front of the trigger-guard, and the bolt can be withdrawn without pressing the release, then I suggest that firing the rifle in this condition may be a potential risk to the eyesight.

If you can load, close the bolt, fire your rifle, and open your bolt without using the release lever, then the locking system is either worn, maladjusted, and/or the return spring is broken or jammed.

The way in which the bolt release operates can be seen in the next image. 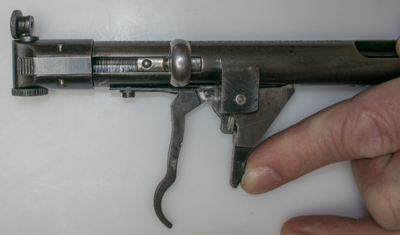 A comparison, below, is made between the actions and bolts of the M1910 and Cadet rifles.

It is worthwhile noting that the complicated and expensive to manufacture interrupted-thread forward-locking bolt-head of the M1910 was not replicated on the Cadet rifle, although the design was emulated many years later by the team at the Royal Small Arms Factory at Enfield Lock for the 1937 acceptance of the World War II "Boys Anti-Tank Rifle". A further interesting association between these two rifles was the adaptation of the .303" CF Ross rifle to a training rifle for the .55" calibre Boys A.T.R. in Canadian Forces employment. This subject is further detailed on the Boys ATR page linked above.

These two images, left and right, are of the

(by courtesy of Chris Smith)

Below left: the aperture rear-sight raised for use and, right; turned away to permit use of the 'V' notched open rear-sight. 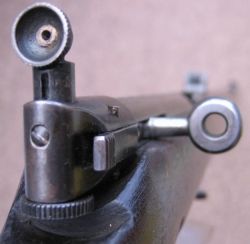 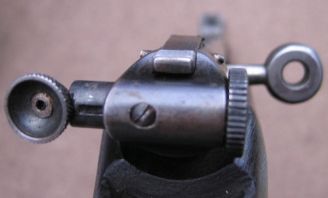 The open rear-sight is of a common design similar to that used on a number of B.S.A. small-bore target and sporting rifles 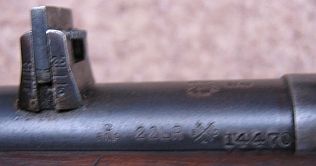 The Ross butt-plate, with the trap inverted in relation to the more common configuration for

but faithfully emulating the butt configuration of its full-bore .303" Service counterpart.

The Enfield Pattern Room example is shown below

In 1980, the Gun Digest published an article by Larry Sterett which informatively covered the Ross Cadet rifle.

We copy an extract of the text below.

- is remembered for his straight-pull rifle designs, and the cartridge which bears his name — the 280 Ross.

The rifles were interesting — some shooters swore by them and others at them — and the cartridge was definitely ahead of its time, achieving magnum velocities long before magnums became everyday things.

What is not so well known is the Ross straight-pull rifle chambered for 22 caliber rimfire cartridges.

Introduced in 1912, the rimfire Ross rifle was available in two models, the Cadet and the Sporter.

Basically the same, the Cadet was full stocked, as fitting a military-type rifle, and was available only with a 22-inch barrel, while the Sporter had a shortened forestock and a choice of 18, 20, or 22-inch barrels.

The action of the 1912 Ross was simplicity itself. A bolt encased-mainspring encircled a striker, which when released, struck the firing pin resting in a guide slot. The mainspring was compressed as the bolt moved forward, with the striker catching on the sear. A locking bar, with release in front of the trigger guard, retained the bolt in the closed position. The Sporter had a round knob on the bolt handle,while the Cadet had the familiar Ross "doughnut" knob. A push-through safety, just above the trigger, could be used to prevent rearward movement of the trigger. Since the rifle is a single shot, the safety is just frosting on the cake.

Checking a Cadet model it was found to weigh 4 pounds 14 ounces, and to have an over-all length of 39% inches with a 21-9/16-inch barrel. Other than some British proof marks—indicating this particular rifle had been in England at one time or another—the only markings on the examined rifle are those illustrated. The bottom of the push-through safety does have ON and OFF markings on it. When pushed through to the right the safety places a bar of steel behind the trigger to prevent it from being pulled to the rear; the word On then becomes visible—if you turn the rifle upside down.

The rear sight is adjustable vertically by rotating a knurled flange at the bottom. The sight is a peep, located at the extreme rear of the bolt stop plug, or receiver cap, and is marked on the left side for 25, 50, and 100 yards. The front sight is a .065-inch blade dovetailed into the barrel.

The Cadet was checked out at the bench at 25 yards, using sandbag forearm and butt rests. Four brands of 22 Long Rifle cartridges were put through it—CCI Mini-Group, Imperial, Herter's International, and Lapua. The largest five-shot group made with any of the cartridges measured 1% inches, with most of the group hovering around one-inch. The Herter cartridges grouped consistently in 11/16 inches time after time, while the Lapua cartridges never produced a group measuring over one-inch. The smallest group was obtained with the Lapua cartridges—five shots measured 1/2-inch center-to-center, which isn't bad for a rifle manufactured six decades ago, fired with metallic sights.
Assuming the Cadet has just been fired, the loading and firing cycle is about as simple as any this writer has seen. The bolt handle may be pulled straight back with only a finger—it is that easy; then a cartridge is dropped into the breech opening and the bolt handle pushed forward with the thumb or fingers. Because the mainspring is being compressed at
this time the forward bolt movement requires some pressure to complete the locking. The bolt face is recessed for the head of the cartridge, so the chambered cartridge is completely enclosed, except for the small firing pin and the ejector openings in the bolt face.

At this point the safety may be placed "On" if the Cadet is not to be fired immediately, such as when hunting. If you wish to remove the chambered cartridge, pulling straight back on the bolt handle will not do it. Instead pushing in on the release lever at the front of the trigger guard will cause the bolt to fly back ejecting the chambered cartridge. It's unusual, but it does work, and well.

Most 22 rimfire rifles are retained in their stocks by a single bolt fastening into a lug on the underside of the barrel. The Ross Cadet is no different, except it has a military-type upper band with stacking swivel. To disassemble, remove the bolt in the bottom of the band—just ahead of the swivel—and slide the band forward; unscrewing the middle swivel will release the barreled action and it can be lifted out of the stock. The Sporter model does not have the military-type barrel band, as can be seen in the photographs, and only the single screw retains it in the stock.

If resurrected the Ross 1912 rifle would be right at home. The mechanism is reliable and simple, the sights are more than adequate, and the rifle is as accurate as any on the market in the under $100 price range. Although it can be operated rapidly as a single shot, it could be made into a repeater with a box magazine without many additional manufacturing steps being involved. Regardless of whether it was a single shot or a repeater, I'd attempt to be right in line when the rifle hit the market, for as 22s go, it's quite a rifle design.