What is the definition of "Small-bore", and, what is a "Miniature Rifle or Calibre" ?

Would you consider yourself to be a small-bore shot?

Today's use of the term "small-bore" is largely attributed to such calibres as the .22in. Rimfire family of cartridges

In days past, "small-bore" referred to any calibre significantly less than .577".

Going back barely two or three generations, a .451" Whitworth target rifle, similar to that shown being fired below, fell firmly into the small-bore category. At that time, almost all modern military small-arms, now considered to be full-bore, would have joined it.

If recoil was a factor in the assessment of the term, modern gas operated rifles would come even lower on the scale. Today's infantry woman has little difficulty with an SA80 personal weapon. But not too many ladies are to be seen on a firing point at a current historic rifle meeting with a small-bore rifle of yesteryear. There are a few notable exceptions, but even some "fellers" treat such as the Whitworth rifle shown below with considerable respect. A 500-plus grain bullet and 60-100 grains of blackpowder are not to be treated lightly compared with a modern .22" small-bore bullet of about 40 grains. (The .577 small hollow-base Whitworth bullet weighs 865 grains using around 100-120 grains of Black Powder).

The elbow of the firer below is no longer in the same position that it was before he pulled the trigger! Another photograph taken from the side (not shown) shows clear air under both elbows! 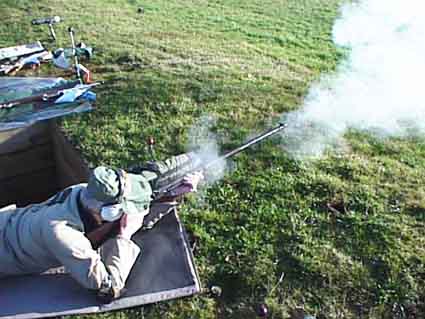 The Whitworth used a helically cast bullet in its appropriately cut rifling.

Both the image above, and that below, of the rifle being fired show the considerable leakage from the nipple and percussion cap. There is a moderate breeze from directly behind the firing-points. 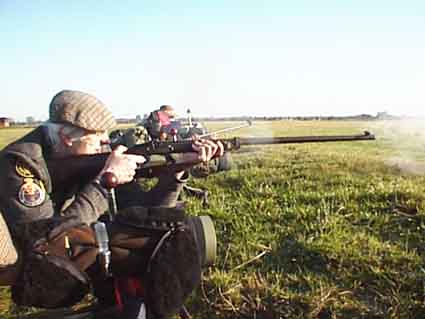 The cartoon below, from Punch (1863), of Wimbledon only three years after Queen Victoria opened the first meeting, illustrates that little has changed in the field of competition except the calibres.

What, historically, is a "miniature rifle"

and what is "miniature calibre"?

The most likely general understanding of this term would probably be that of a modeller, who would hold an expectancy that a small scale replica of a rifle was the subject under discussion; (such as the 7" long walnut and steel hand-made model of an Anschutz 1411 shown above with a proportionate full-size .22 Long-Rifle cartridge beneath) .

Another option might be the cast bronze miniature of the "Rifle, Short, Magazine Lee-Enfield" (S.M.L.E.) shown right, which model was produced at the Royal Small Arms Factory at Enfield Lock at the time of the introduction of the S.M.L.E. Mk.III rifle around 1906. These cased presentation items were given to a small number of staff involved in the design and approval of that important new mark of Lee-Enfield rifle, which was to prove so instrumental in the British rifleman's successes in the Great War (1914-18).

On the other side of the rifle, the 'dumbells' on the butt-socket are even cast-in, as are the dial volley fore-sight.

Remarkable and aesthetically pleasing as such miniature models can be, however, from a shooting standpoint, in fact the term "Miniature Rifle" is borne out of the mid to late Nineteenth Century need to distinguish between the contemporary understanding of "full-bore" or "small-bore" rifles , and those "miniature" calibre rifles especially designed for short range training and target shooting purposes - usually at distances between 10 (often under cover) and 100 yards, but very occasionally at 200 yards, - as well as for those rifles intended for light sporting or vermin use.

Rifles in calibres such as .22 rimfire became the norm, but not before a multiplicity of other cartridges had become described as "miniature". These included the well-known Morris cartridges in .297/.230 inch calibre, several cartridges in .300 calibre - some of American origin - and the .310 'Cadet' cartridge used by models of the Commonwealth Cadet rifle, and of the B.S.A. Model No.4 rifle.

To further illustrate the semantic differentiation between miniature rifles and scale miniatures, we illustrate two more "scale models". First is a Mannlicher sporting rifle of just under half-scale, with a proportionately displayed actual-size full-bore round.

Each of the two (non-firing) models shown here have working bolts, but only partly drilled barrels. The Mannlicher is one of a small number built by the manufacturer for distribution to selling agents as display items.

Another half-scale miniature rifle is the beautifully crafted flint-lock example shown below. It has carefully selected and finely figured furniture.