Unusually, we have FOR SALE one of these rifles that is duplicated in, and therefore surplus to, the Rifleman collection.

Rather better known for their shotguns, C.G. Bonehill's company converted large numbers of

then obsolescent Martini-Henry/Metford and Enfield rifles to .22 rimfire,

and other miniature calibres for "Miniature rifle shooting",

from the late Nineteenth through to the early part of the Twentieth Century. 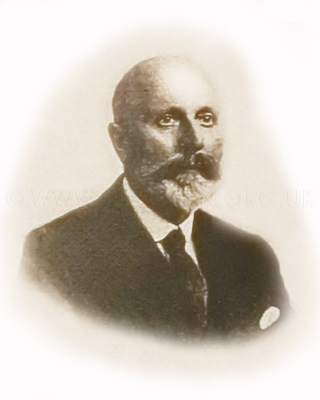 Here is a précised rundown of Christopher George Bonehill and his long-standing company.

Born in 1831 from a farming family that also held ironmongery interests,

in 1844 he became an apprentice at a firm run by one of the Aston family.

He left to start his own business, making gun parts, in 1851.

eventually gaining an order from France for 25,000 Chassepot rifles.

to the British Board of Ordnance, among a number of further contracts.

By 1869 he was already taking out patents for shotgun inventions,

and was operating from a factory in Morville Street, Birmingham.

The firm was moved in its entirety to Belmont Row in 1873,

taking over buildings previously used by the National Arms and Ammunition Co.

By now Bonehill had become one of the Guardians of the Proof House in Birmingham.
and in 1880 the company acquired a London agency that operated until the latter part of the decade.

Of several, perhaps five, sons of Christopher Bonehill Snr., at least two worked for the company;

A.M Bonehill, possibly Arthur, who was eventually to run the business, and his brother

Christopher Junior who, as a gun works manager, sadly pre-deceased his father,

although Junior had presented him with a grandson, another Christopher G., in 1884.

In addition to the many inventive shotgun designs and patents emanating from the company,

there was a considerable level of product export to the U.S.A., but the 'McKinley Tariff',

brought in by the U.S., in 1890, seriously affected shotgun production,

and the company's output was partly redirected to the manufacture of rifles and air guns.

As well as the 1895 patent for a take-down Martini system, illustrated further down this page,
a patent taken out in 1907, in the name of company associate H. Horner,was for an air-rifle's barrel-cocking mechanism which was later to provide the design for the firm's ubiquitous Britannia air rifle.

Just under a year later, Bonehill and Horner took out a further patent (No. 13567) for a device providing a pellet-pusher for a fixed air gun barrel.

1905 saw the acquisition of a patent (No. 22658) for a rear-sight with screw adjustment, and this was possibly followed by one for their .22 conversion of the Martini obsolete service rifles, leading to the supply of such rifles to the Nation's burgeoning shooting clubs and their members via the Society of Miniature Rifle Clubs. Further designs and patents followed and, after C.G. Senior's death in 1920, as we have mentioned, A.M, Bonehill took over the company and moved it to Price Street a year later.

Eighteen years later, in 1931, the firm was sold to one A. Mawson, and continued trading until its final closure in 1962. Regrettably there are no known remaining records of the company.

Below: a full-length military woodwork Bonehill .22RF converted, Enfield made,

1882 Martini-Henry, retaining its bayonet fixing lug on the nose-cap,

The next image can be rotated and zoomed, either as initially loaded or full-screen for higher definition.

Not all .22RF converted Martini-Henry/Metford/Enfield rifles remained in their original full-stocked military configuration.

Some were customised for discerning target shooting buyers, and Bonehill were not behind in meeting such requirements.

This rifle was fitted with shortened and modified fore-wood, with a specially made nose-cap.

Below: a disassembled Bonehill .22 conversion's action,

showing the rifle's intended retailer to be the Society of Miniature Rifle Clubs. 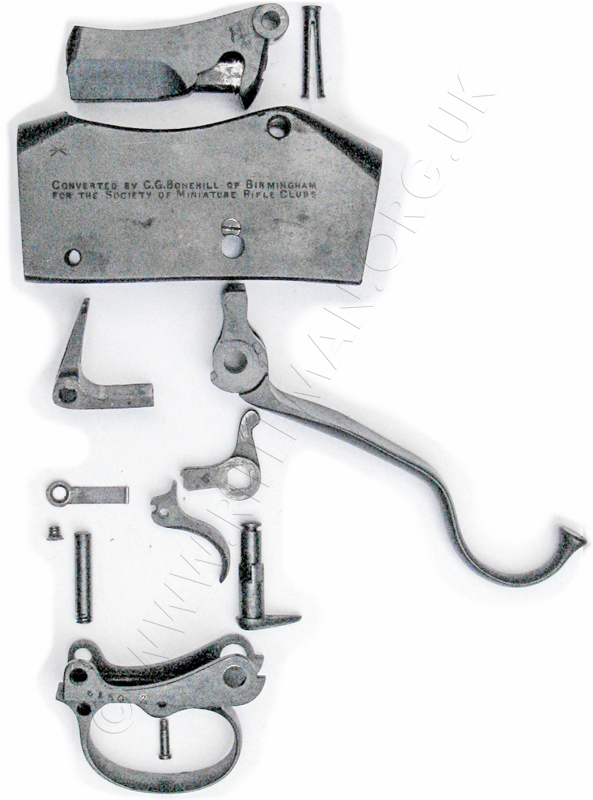 Followed up by the comparative 1871 Patent Drawing for the Martini-Henry. 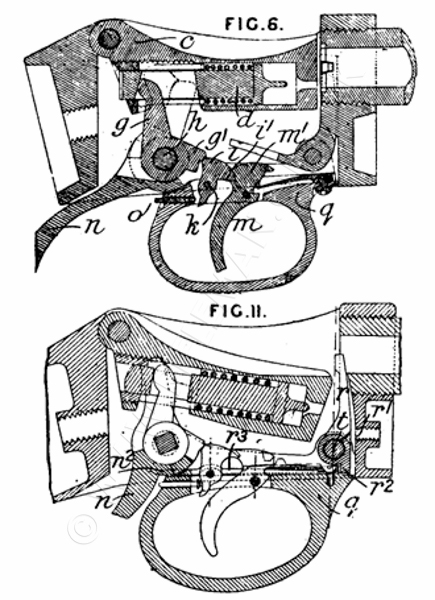 Many of these rifles were produced for the Society of Miniature Rifle Clubs, as well as for the British National Rifle Association, providing their members with, for the day, very reasonably priced rimfire target rifles at a time when rifle shooting was being heavily promoted in Great Britain after British troops were seriously outshot by the Boers during both of their South African conflicts.

The rifle below has been fitted with the BSA No.8 folding target sight,

that allows instant use either of its aperture sight or the rifles original open tangent leaf barrel sight,

dependent upon the competition being shot.

You can separately view the BSA sights catalogue for 1912 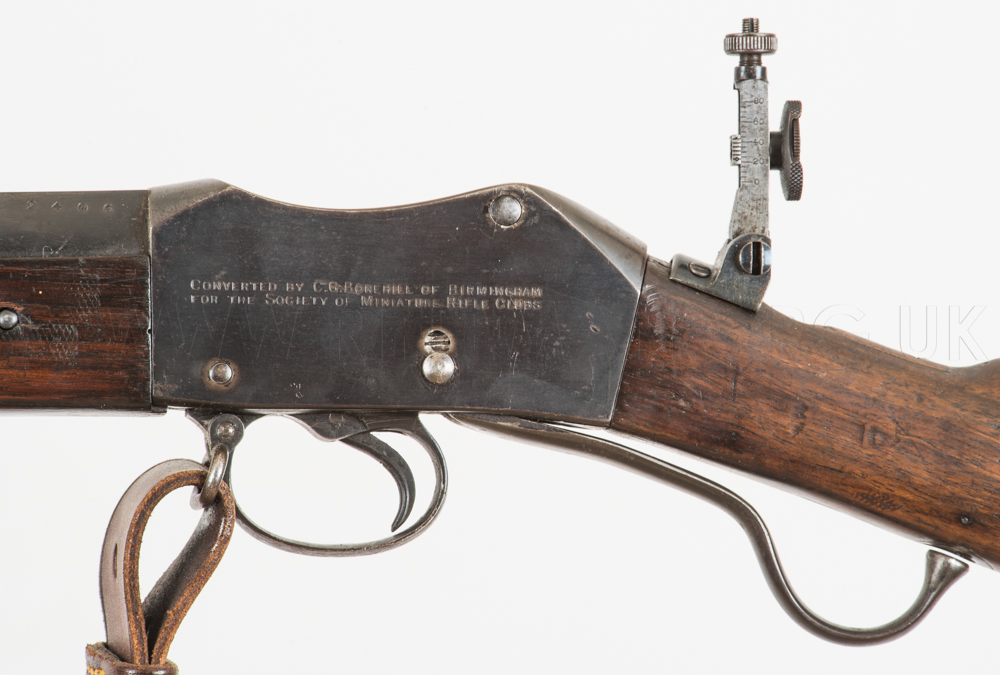 In addition to the one-piece rebarrelled Martinis, the company manufactured convenient take-down versions of these rifles,

along the same lines as those of W.W. Greener's product.

Bonehill patented his design for a take-down Martini in 1895, and we illustrate below a facsimile of the Patent application.

The design was also incorporated into the Greener GP shotgun.

This is a searchable flip-page facsimile of the document, which may take a few moments to display.

A less common, and rather later, modification to the sighting arrangement for these rifles

involved the milling of the rear of the action body to accommodate a proprietary windage and elevation adjustable target sight.

In these instances, the Parker-Hale Model 15A sight has been incorporated, 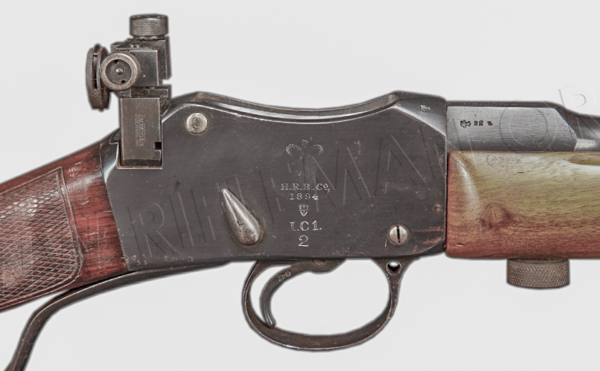 The Parker-Hale Model 15 rear-sight was effectively their stand-alone Model 7A, without the base mount,.

but with a dovetailed front face to fit the elevation dovetail on the rear of the Model 15 rifle's action body.

Secondly to the the sight's fitment on the Bonehill rifle, for comparison we show another,

on a London Small Arms Company conversion for the SMRC,

perhaps once a presentation rifle, as it has been elaborately engraved with the Maltese Cross emblem of the Society,

encompassed by the words "TARGET RIFLE", and bearing their motto "LOOK FORWARD",

to be found on all the Society's regalia, including their presentation medals, silverware, and crockery. 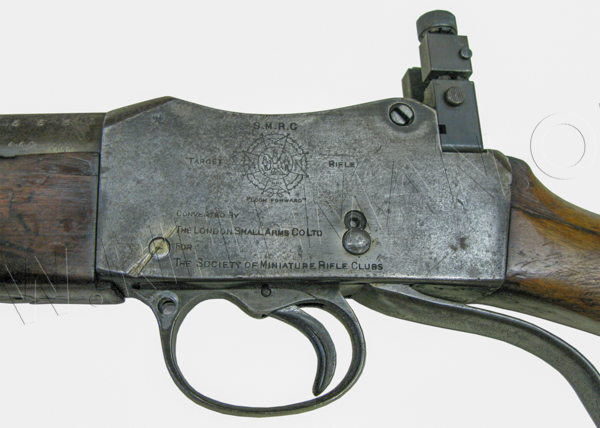 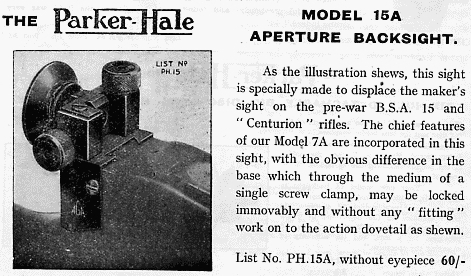 and one or two relevant items are shown in the advertisements in their contemporary catalogue.

In addition to their small-bore conversion, from early on they manufactured and marketed

Would that you could nowadays have a new barrel fitted , complete with sights, for three pounds! 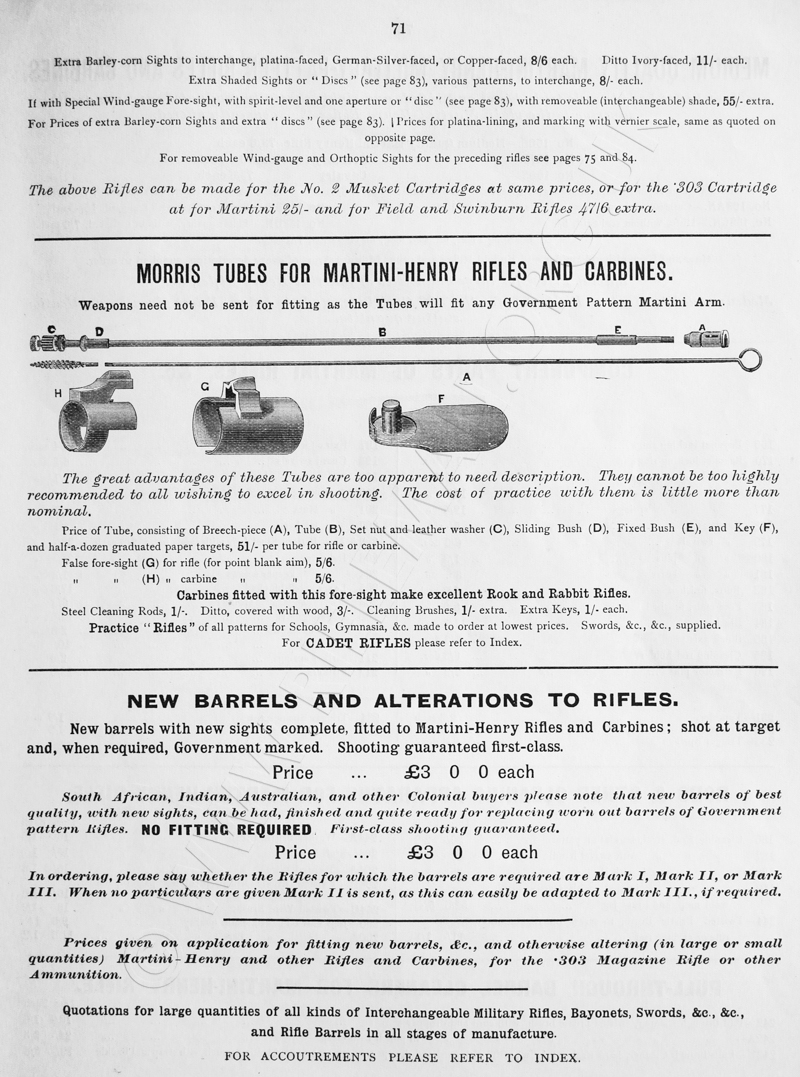 They also provided ready made ammunition, or all the components and equipment to hand-load your own. 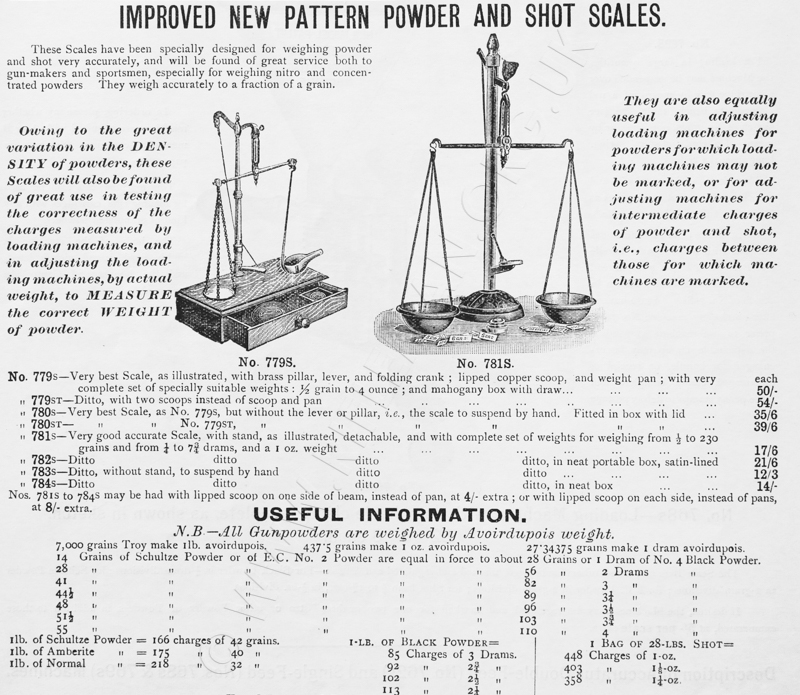 We have even located a set of the "Very best" No.7798 weighing scales advertised above for fifty shillings. 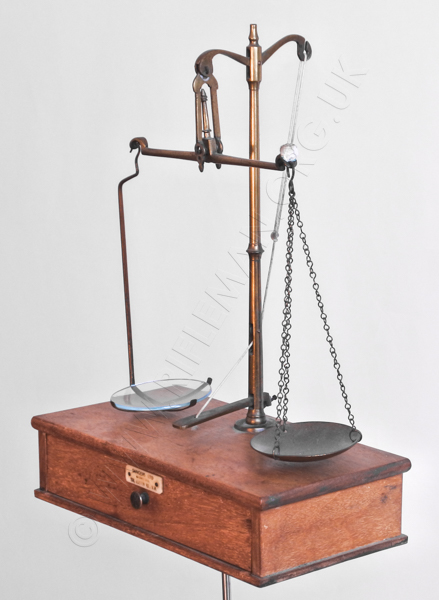 We will soon be adding further images and detail of the Bonehill rifles,

but in the meantime, visit the W.W.Greener Martini Target Rifles page