N.B. All photographs and documentation on this page have been afforded by kind permission of the curators of the

National Firarms Collection and Archives of the Royal Armouries, who retain shared copyright with the Rifleman historic arms website.

Designed and prototyped late in 1937, this rifle was intended for training purposes on standard military ranges, where the full .55 calibre round exceeded normal safety regulations in both muzzle energy and velocity. Additionally, the issue anti-tank round was expensive to manufacture, and available supplies and production were urgently required in several combat theatres.

There is but one major difference in the external appearance of this experimental prototype rifle from the standard issue early Mk.I rifles.

This is the seemingly enormous diameter "heavy" barrel that belies the much reduced calibre.

(See the Boys Anti-Tank Rifle in .55 calibre for comparison)

In his book "British Small Arms of World War II" (ISBN 0 949749 09 5) Ian Skennerton quotes figures indicating that the Birmingham Small Arms Company produced just two experimental Boys ATRs in .55/.303 calibre. One was supposedly manufactured in December 1942, and the other in July of the following year (although he comments on the possibility of these being one and the same rifle).

Actually, a Boys .55/303 calibre rifle had been produced and trialled considerably earlier, in mid December 1938. We are now able to illustrate and describe the form that this took. Incidentally, on the same date, an "Air rifle device for the Boys rifle" was produced, but details of this unit have yet to be discovered.

There has been some speculation that the .55/.303 rifle was intended as a small-calibre high-velocity armour-piercing weapon; however, as related in our heading paragraph, the truth of this particular rifle is rather more mundane. In fact, the purpose was to provide a rifle of lesser power to be used on standard .303CF capable ranges, but at the same time affording recoil more akin to the firing of the .55 AP round to better prepare those in training for the significant recoil of the full-bore rifle. The .55/303 practice round for this rifle was headstamped

However, to at least partly justify the high velocity AP rumour, it has been recorded that a few .55/.303 inch cases were made later in 1942 that were connected with high velocity experiments. These latter cases were not headstamped.

The very earliest (pre-amendment) 1937 edition of the Small Arms Training Pamphlet No.5 for the Boys Anti-Tank Rifle carries a paragraph on page 6 stating that

"Practice at stationary and snapshooting targets will be carried out on ordinary ranges,
using an adaptation for .303 inch ammunition embodied in the anti-tank rifle".

It goes on to mention "a representative tank target for use with .303-inch ammunition at a range of 100 yards"

We were initially uncertain whether this referred to the .55/303 cartridge above, or to some other sub-calibre device utilising the standard service .303 inch CF round. However, the likelihood is that it was anticipating the introduction of the .55/.303 rifle and cartridge. This is perhaps confirmed by the fact that any reference to this usage of .303 calibre ammunition for training was no longer present in any of the following issues of amended pamphlets.

Another early proposal was for the adaptation of the Savage Model No.6A semi-automatic rifle as an attached sub-calibre unit.

The calibre markings are clearly displayed on the left-hand-side of the barrel reinforce. 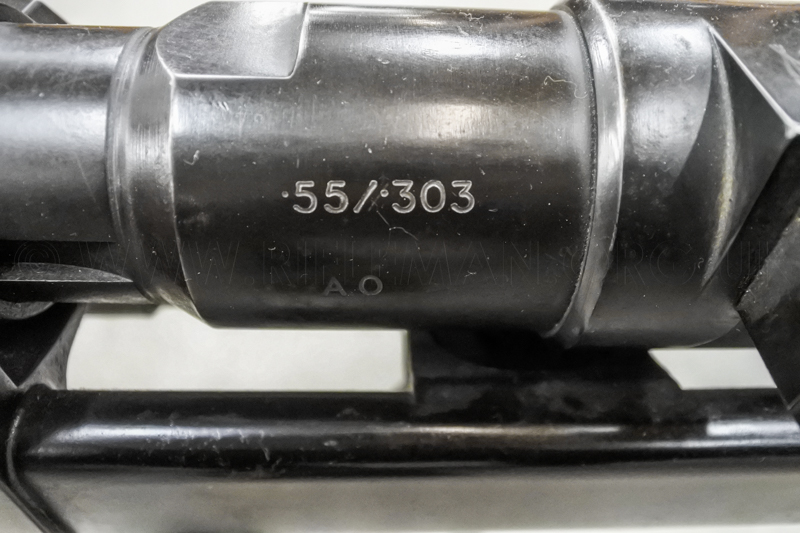 Rearward of the trunnion block there is little to show that this is other than an issue .55 calibre rifle. 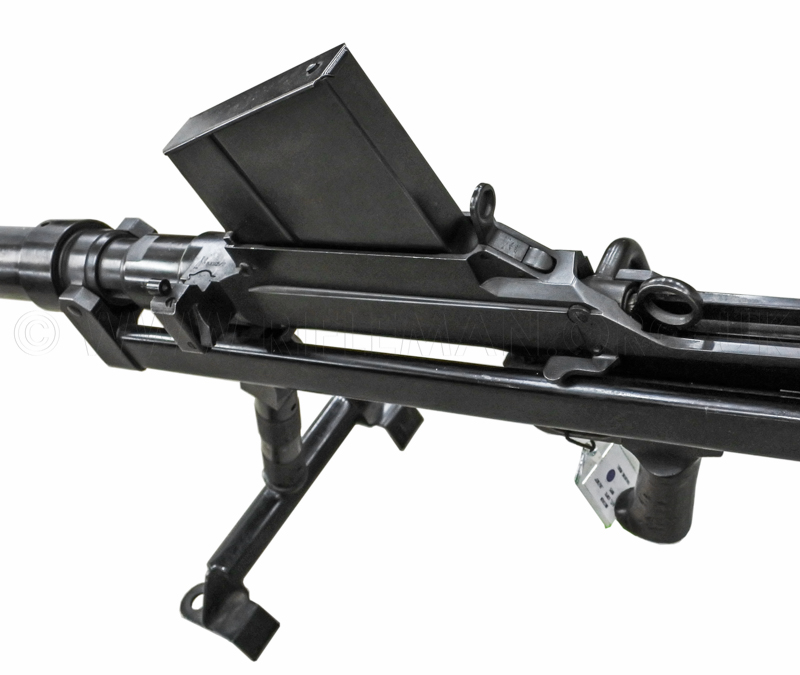 Forward of that point, however, is an entirely different matter. 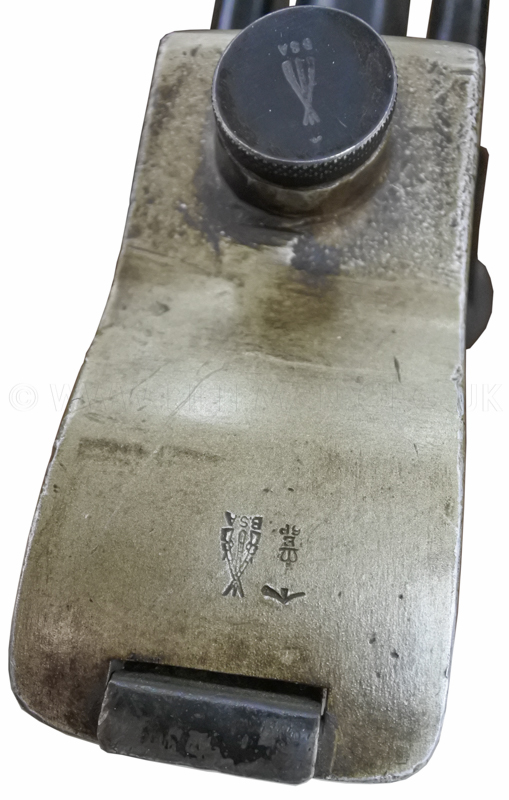 The serial numbers of the

are stamped into the groove

Those are in only single and double figures.

It is therefore odd that

in the butt carries the

"Piles Arms" logo of the

along with the inspector's mark

and the familiar "Broad Arrow

We are able to show the image below of the .55/303 cartridge by courtesy of (the now late) A.O. (Tony) Edwards, author of several publications on British military cartridges and small-arms, to whom we are also indebted for other cartridge data given both here and elsewhere on site. (see Bibliography)

The significantly necked .55/.303 cartridge is shown above the standard .55 armour-piercing round.

The round was a Kynoch design, No.14056, being a "55/.303 inch experimental short-range cartridge", with the following characteristics:

That it has been neccessary to modify the magazine is evident from the images below.

The platform is specifically shaped to accommodate the heavily necked .55/.303 cartridge,

the standard .55 calibre version running parallel from front to back.

The project to produce a lower powered version of the Boys rifle, but with enhanced recoil, employed a similar system to that used in the German MG42 machine gun,

in which the initially spring assisted cyling of the action was insufficient, requiring a device to afford additional impetus to that action.

Expanding gas from the firing of a round was ported into a shuttle that drove back into the barrel's muzzle, adding significantly to the energy cycling the action.

The .55/.303 Boys rifle was designed on an equivalent basis, but for very different reasons.

The MG42 muzzle components are shown below to illustrate that system.

The system was best explained in an extract taken from a memo including a report recorded in the Ordnance Board Proceedings of March 1938.

This weapon consists of a Boys rifle with a special barrel chambered for a 0.55 inch cartridge case, but with the bore reduced to take a 0.303 inch bullet.
The body, bolt, cradle, front support and buffer are the same as those used on the 0.55 inch Boys rifle.
The trunnion is extended forwards and threaded on the outside of the forward end. A tubular sleeve with a shoulder at one end and a thread on the outside of the other end, fits over the barrel, the shouldered end being clamped to the trunnion by a screwed ring. When this ring is screwed home, the sleeve is held firmly against the trunnion face and a keeper screw is provided to prevent unscrewing due to vibration. At the forward end of the sleeve a square hole in the top left side forms a locating hole for a spigot on the foresight bracket, while a clamping ring bolt and nut hold it in position.
A screwed locking ring on the threaded end of the sleeve locks in position the cup-shaped muzzle attachment which has four equally spaced holes drilled through the sides to allow the gas to escape when the minimum recoil is required. A square boss on the front forms a spanner grip to allow adjustment of the muzzle attachment and a hole through its centre concentric with the bore permits passage of the bullet.
Screwed to the muzzle of the barrel (left-hand thread) is a disc, fitting inside the sleeve against which the gases impinge, and force it rearwards with the barrel.
Regulation of the distance between the muzzle attachment and the disc on the end of the barrel enables the amount of recoil to be varied.

........... here the outer sleeve has been removed, showing the frontal piston-like flange at the muzzle of the .303CF barrel,

which recoils inside the static outer casing screwed at its rear end onto the trunnion at the front of the rifle's frame.

The sleeve is shown separated from the rifle, with the front recoil-adjusting muzzle cap, and its C-spanner-notched locking ring, to the right,

ahead of the fore-sight, and the circular sleeved nut, that fastens the casing to the rifle's trunnion block, to the left.

This image of the muzzle arrangement shows the muzzle cap and its locking collar screwed onto the front of the barrel casing.

Adjustment of the recoil level was achieved by slackening the locking collar and using a spanner on the square on the front of the front cap.

The length of the thread on the casing is approaching two inches, and screwing the cap fore and aft alters the volume of the space between the front of the cap and the piston-flange on the front of the .303 barrel. This volume adjustment changes the pressure, from the fired propellant gases, that is applied to the piston, increasing or decreasing the rearward recoil force.

Unfortunately, whilst trials confirmed the system did partly achieve the aim, the additional force applied to the barrel did not transfer significantly to the firer's shoulder.

The nett result was a major disappointment, and the project was taken no further, as is made plain in the continuation of the report text copied in tan colour on this page.

Below is shown the muzzle with just the recoil-adusting front cap removed.

Its locking ring remains on the thread of the casing.

The barrel's front piston-flange can be seen inside the casing at the rest position.. 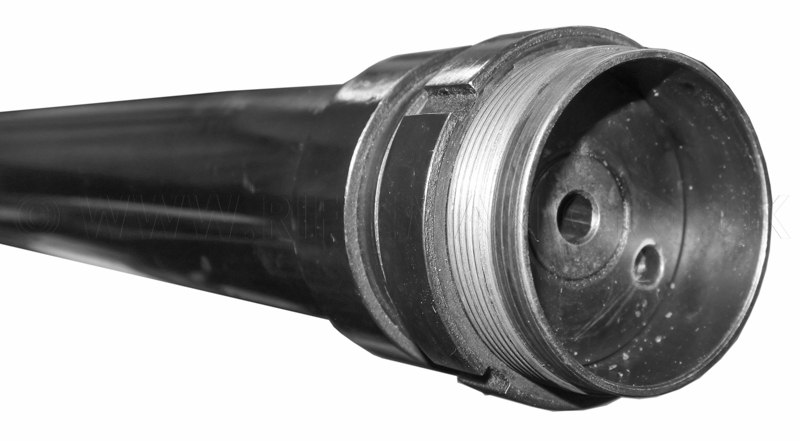 Below, can be seen the threaded forward addition to the standard Boys' trunnion block.

The outer barrel-casing screws onto this, and the groove in the barrel's reinforce

shows where the barrel slides back through the trunnion with the recoil of firing. 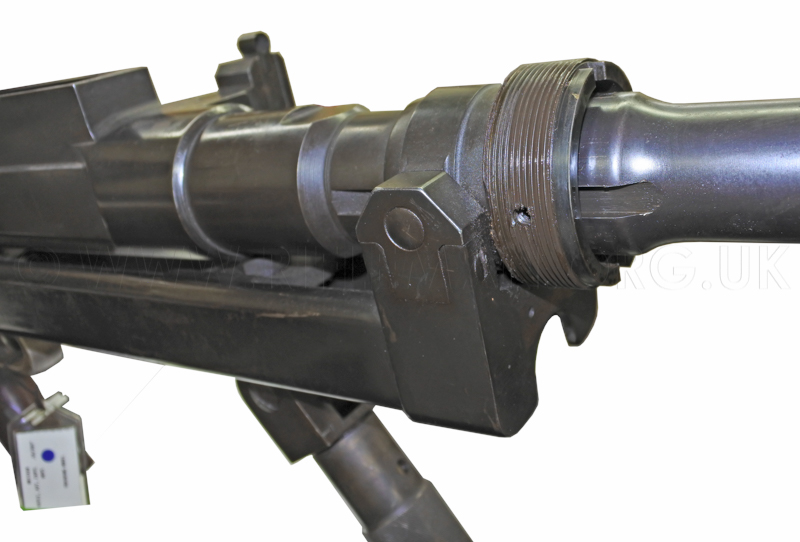 Here, the collar nut (and its locking screw) holding the barrel casing to the trunnion block is clearly seen. 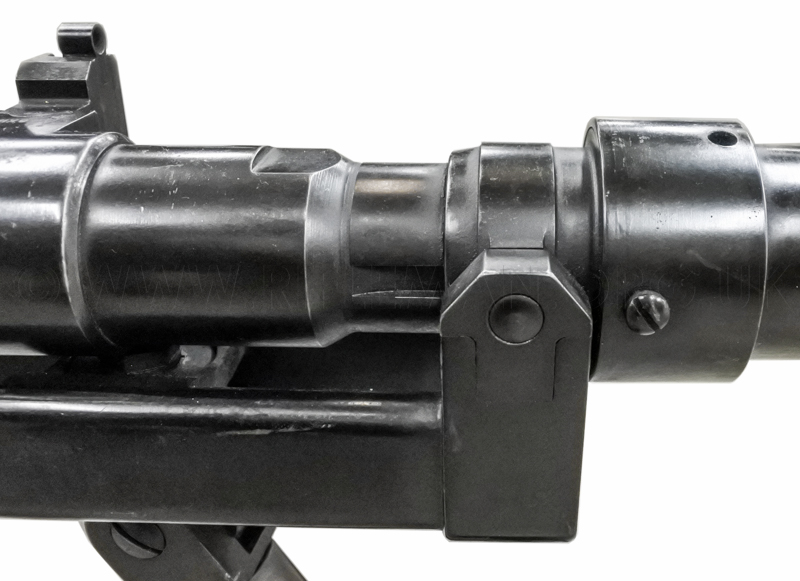 The continuation of the report recorded in the Ordnance Board Proceedings of March 1938 read .......

The principles upon which this weapon has been constructed appears to be incorrect, for although, as stated. above, the amount of recoil can be varied, this variation is effective only within the system, practically no external variation, that is, effect on the firer's shoulder, can be obtained.
This is borne out by experiment, for although a very heavy recoil (within the system) can be obtained, sufficient to close the buffer tubes solid, yet the firer experienced no. shock comparable with the 0-55 inch rifle.
In all eight rounds were fired, some with the rifle rigidly fixed on an iron table and some from the shoulder, and it was found that if the muzzle attachment was engaged by more than three or four threads, the buffer tubes closed solid.
Examination. after firing disclosed the fact that the front end of the rear buffer tube had opened out due to the violent blows received in firing. From the result -it may be deduced that the violence of recoil, within the system, is much greater than that of the 0.55 inch rifle, and had this been communicated to the firer's shoulder the effect would have been very severe.
D. of A., 1.e. S. 38 to O.C. (S.A.).[Ed: Director of Artillery to Officer Commanding (Small Arms) ]

The advent of the aluminium bullet for use in the Service A/T rifle has presumably
rendered further experiment with the 0.55/0.303 inch sub-calibre A/T rifle unnecessary.
We are, therefore, dropping this research.

Action.—Forward to D. of A.
No further steps will be taken to pursue this investigation.

The mention in the report of the aluminium bullet for use in training warrants some comment. Trials were undertaken with these light-weight bullets, and they proved satisfactory in the reduction of muzzle energy, to the point where their employment on standard .303 ranges was acceptable.

The bullets were actually simply aluminium cored, rather

than being formed around the tungsten core of the AP round. The bullet weight was therefore much reduced, and with an associated reduction in the propellant charge, the muzzle velocity dropped from 2,900 feet-per-second for the AP round to 1,700 fps for the .55 practice round. The main page for the .55 calibre Boys anti-tank rifle carries details of the various .55 calibre cartridges, including practice rounds. 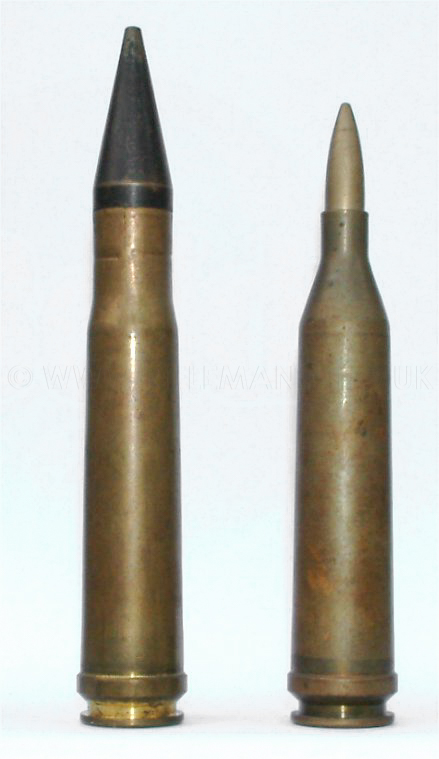