The Savage Model 6A semi-automatic .22 Rifle as a sub-calibre unit on the Boys Anti-Tank Rifle Mk.I

Image by Courtesy of the Royal Armouries

When a need was perceived early in the Second World War for a low-power training method for those being taught to use the Boys .55 calibre anti-tank rifle, several proposals were considered. This necessity arose because the parent rifle's muzzle energy and velocity was considerable, rendering its use on standard ranges a risky proposition. Even in the U.K. during World War Two, there were only a small number of ranges with sufficiently large safety zones for the Boys to be used safely and, additionally, the .55 calibre ammunition was both expensive and in short supply, being urgently needed in several combat theatres.

One sub-calibre system developed utilised a steel "conveyor" in the shape of a .55 round, but with a .22 rimfire chamber, short integral rifled barrel, and its own striker that was itself struck by the Boys rifle's own firing-pin. Another system involved the clamping of a .22RF Lee-Enfield Rifle No.2 Mk.IV* training rifle alongside the Boys.

These latter two devices are covered on the main page for the Boys Anti-tank Rifle.

There were two designs mooted at the Enfield Royal Small Arms Factory, for the use of the Model 6A rifle as a sub-calibre adaptation, one being for standard infantry prone or fox-hole/trench use of the Boys rifle, and another for training those who would be firing the rifle when it was mounted on a reconnaissance or similar armoured car.

In mid-January 1940, drawings were made of both proposals, and these are illustrated here

by kind permission of the Royal Armouries in Leeds, now keepers of the old Enfield Pattern Room firearms collection and archives.

A drawing was made of the rifle, in November 1939, to record it in preparation for the design of the attachment system.

The first design mentioned above is that of the drawing below.

As can be seen, the plan involved the use of brackets to mount just the barrelled action

of the Savage rifle below and to the right of the Boys barrel.

This was a similar method to that eventually used to mount the already mentioned No.2 Mk.IV* rifle on the Mk.I Boys rifle.

A close-up of the rifle's right-hand side elevation on the drawing is here shown.

The barrelled action of the Savage 6A is shown below .......

........ and an overlay of the Boys rifle and Savage barrelled action on the Enfield drawing.

The second design previously mentioned was actually the earlier, but by only a month or so.

a rather more "Heath Robinson" appearance than the basic infantry training arrangement.

The reason for the high mounting of the Savage rifle is not certain,

but may be explained when the positioning of the Boys rifle on one or two armoured reconnaissance cars is considered.

The photographs of two such vehicles show that, on each, the Boys was mounted through a small port in the front glacis armour plating.

The cut-out slot rises right to the top of the plate, and the Boys can therefore be dropped into position from above,

no doubt affording a quicker dismount if required, and perhaps elevation may also be thus improved.

There is an infill cover-plate to protect the upper gap in the slot, but this is a separate unit, and is probably also speedily removable.

The Morris CS9 is shown below, in the Libyan theatre during July 1940, with an amusing degree of sartorial style elegance.

Photographs by courtesy of the Imperial War Museum.

The Boys rifle in the above photograph is a Mark 1 with the earlier circular recoil reducer.

This model of armoured reconnaissance vehicle is an RAF one, pictured in the Azores in 1944.

Here, the Boys rifle is the Mark 1* with the later "harmonica" version of recoil reducing muzzle-brake.

The port for the rifle in the frontal plating is more clearly shown.

On the Bren Gun Carrier, which could also mount a Boys Anti-tank rifle,

there was a very similar gun port arrangement

which the next image shows from the firer's position. 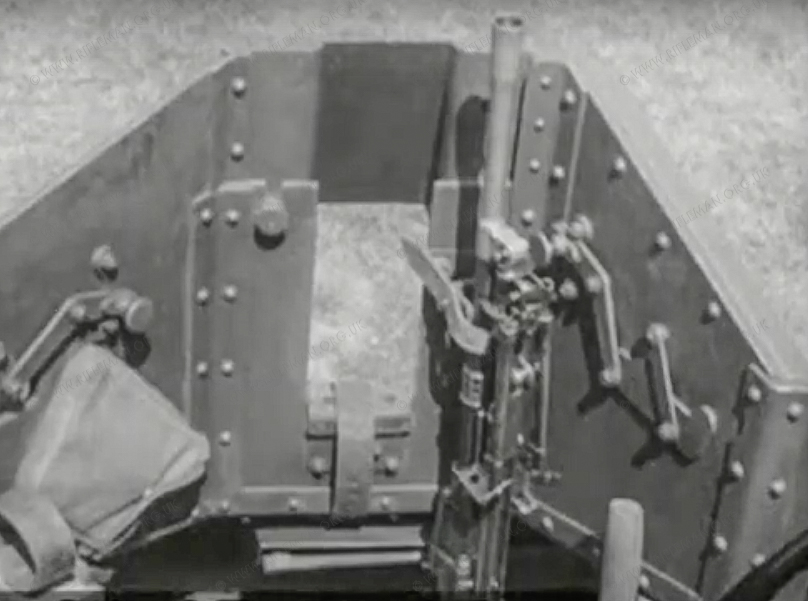 In order that clear sighting could be achieved by the gunner over the sights of the Boys rifle,

no part of the adaptation could be fitted to the left-hand-side of the barrel. This applied to both mount types.

with the Boys' positioning as in our first example, thus presumably necessitating the

high mount arrangement to clear the top of the frontal armour plating.

As with that first design covered on this page, we have extracted the side elevation of the rifle and vehicular Savage mount

from the drawing kindly afforded us by the archivists at the Royal Armouries.

And, as before, we have produced a clarifying composite image of the drawing, overlaid with the two rifles.

It can be gathered, from the main drawing, that the main support block was made out of timber,

rebated into the magazine-well, and braced by steel bracketing.

Evidently it was not possible for the Boys five-round magazine to befitted to the parent rifle.

For anyone in possession of both rifles, and planning to replicate either of these sub-calibre arrangements,

we illustrate below the detailed drawing of the bracketing for the vehicular version.

When your project is complete, please let us have photographs!

It is worthy of mention that, three-quarters of a century on, the Savage Arms Company has provided the British Forces with their very latest Cadet Rifle, the L144A1; not to forget the North American NRA Models 19 and 1933 rifles for cadet and target use that the company produced between the two World Wars, some of which rifles found their way to Great Britain for mainly civilian use.