which stemmed from the EM1 Bull-pup assault rifle

N.B. ALL PHOTOGRAPHS ON THIS PAGE ARE COPYRIGHTED TO BOTH WWW.RIFLEMAN.ORG.UK AND THE ROYAL ARMOURIES

For readers already aware of the British EM-2 rifle, of .280in calibre,

some interesting facts lie within the history of

that rifle's development at the Royal Small Arms Factory, Enfield.

It is not generally known that the original designation

for the RSAF bull-pup design was as the Enfield Rifle No.9.

It was soon realised that this nomenclature had already been put into use,

so the obvious progression was to award the next number , for Enfield Rifle No.10.

For reasons not entirely clear, but probably related to the then imminent change

of nomenclature from plain rifle numbers to the currently employed system of "L" prefixed codes,

(to such as the L1A1 for the incoming NATO selection of the Belgian designed self-loading rifle, or "SLR")

the prototype was named on drawings as the "X1 E1";

both "X" and "E" often being prefixed to the numbers of 'Experimental' weapons.

The EM-2 was the first rifle of "bull-pup" configuration to be adopted, in 1951, into British service. Its life at the top was particularly short. Trials in 1952, and argument in the House of Commons over the direction which the British should take to help bring a common cartridge and rifle to NATO, led to a preference for adoption of the Fabrique Nationale designed FAL - SLR (Self-Loading Rifle). The EM-2 was designed for a .280-inch calibre cartridge, and less suitable for the proposed NATO calibre. Winston Churchill supported adoption of the FAL in anticipation that it might also be taken up by the U.S. Military, who were certainly not intending to invest in the British EM-2 design*. These considerations, and perhaps economics too, led to the early demise of the EM-2, which had not been brought into full production, and the introduction of the FN -SLR in 1954. There is an irony in the more than thirty year delay before British forces were finally issued, in 1985, with another new bull-pup configuration service rifle, the L85A1 (SA80 - shown right). This replacement for the long-serving FN FAL was, to all intents and purposes, that very bull-pup design in .223-inch calibre; oft credited as being the last Enfield rifle, (but certainly not the last Lee-Enfield).

Below: the "battle-ready" example of the 'standard' EM-2 that lies on display in the collection of the Small Arms School at Warminster.

The bayonet bears more than a passing resemblance to the less common option for the earlier Lee-Enfield No.4 rifle,

the swivelling-pommel No.7 Mk.I bayonet .

The grooved hand-hold is a separate component affixed to the fore-end furniture.

The photographs of the next 'standard' EM-2 rifle are by courtesy of the Small Arms Collection of the Defence Academy at Shrivenham, Wiltshire.

There are notable differences between this rifle and the Warminster example.

The fore-end's hand-hold grooving is at variance, and in one piece with the furniture.

as is the steel side pressing above the pistol-grip on the right-hand-side.

The trigger-guard is more angular, and the trigger is a flate plate type.

The frequently published 1951 dated photograph below shows two British soldiers at the military demonstration described in the NYB report attached.

The nearest is one Corporal Unwin, holding the "new" EM-2 (short-lived) service rifle.

This model is as the Warminster example above.

To his left, another soldier carries the outgoing Lee-Enfield No.4 rifle, soon to be replaced by the Belgian 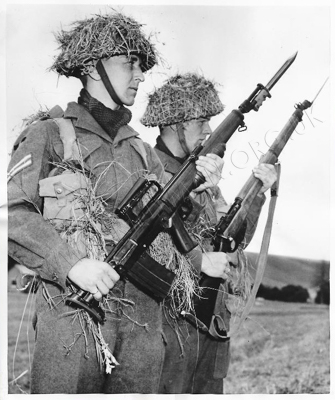 HELD BY CPL.E.UNSWORTH, WAS HIGHLY PRAISED AFTER A DEMONSTRATION

BEFORE 200 RANKING OFFICERS OF THE U.S.A., THE BRITISH COMMONWEALTH

NATIONS, AND OTHER FRIENDLY COUNTRIES,INCLUDING YUGOSLAVIA.

DEVELOPED AFTER  FIVE YEARS OF INTENSIVE RESEARCH,THE .280 IS ALMOST A

FOOT SHORTER THAN THE U.S. GARAND, MORE THAN A POUND LIGHTER AND CARRIES 20

ROUNDS TO THE GARAND'S EIGHT.A RADICAL DEPARTURE IN DESIGN, IT IS EQUIPPED WITH

AN OPTICAL SIGHT, AND THE WOODEN STOCK HAS BEEN ELIMINATED. IN THE BACKGROUND IS

THE STANDARD BRITISH BOLT-ACTION .303 RIFLE, WHILE IMPRESSED WITH

LIKELIHOOD THE U.S. WOULD OR COULD SWITCH AT THIS TIME.

Recent publicity, of the hitherto all but "forgotten" EM-2 rifle, has raised discussion of the political reasoning

behind the selection of the 7.62mm round as the new NATO rifle ammunition, and the demise of what has often been deemed,

in the ensuing years, to have been an error in dismissing the .280in round and its well-designed and practical weapon of projection.

Even now, the EM-2 appears almost modern, apart from the aesthetically pleasing and traditional

employment of walnut furniture, rather than green or black composite material.

The text of the report makes quite clear the fact that a decision not to approve the EM-2, and its .280 calibre ammunition,

as a NATO service weapon, had been made by the United States long before the rifle's appearance at this demonstration.

Some of the factors then involved are discussed in the documents available on both this page and that for the EM-1 rifle. 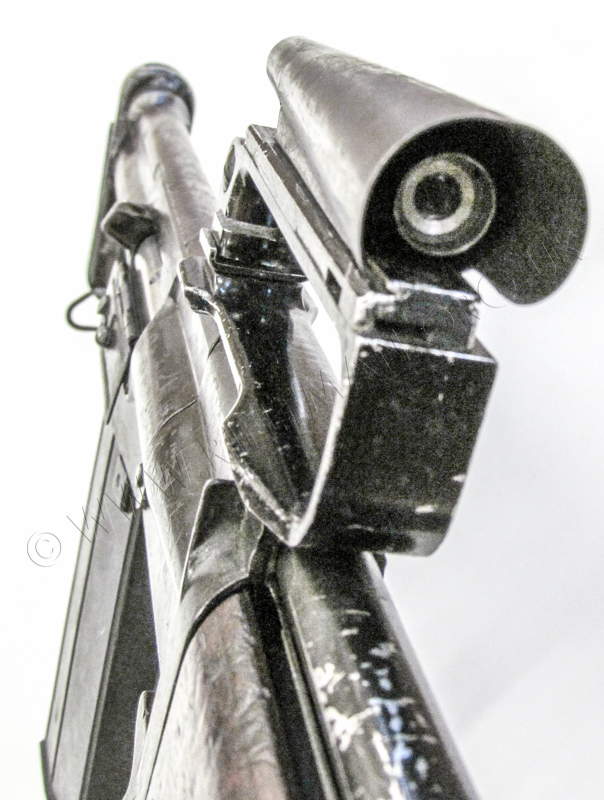 The EM-2's progression from the EM-1 Rifle was made over several years,

as the next British individual Service Weapon. 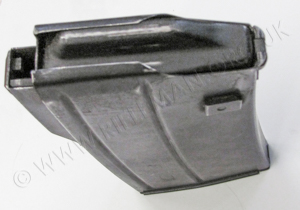 Above left: the gently curved magazine for the new rimless cartridge.

Above right: the full-length rifle's muzzle, showing the Lee-Enfield No.4 rifle form

of barrel lugs that locate the bayonet, of aforementioned No.7 swivelling-pommel type.

In 1951 an article was written, covering the introduction of the EM-2

during a meeting at the home of the Small Arms School at Warminster, Wiltshire.

Below is a searchable facsimile of the document, which may take a few moments to display.

It was remarkable that the EM-2 had rate of fire near twice that of the U.S. M1 Garand service rifle and,

if the above article is correct, with significantly greater hitting power.

The smaller .280 calibre probably also resulted in the advantage of a flatter trajectory.

This last factor was later repeated with the introduction of the 5.56mm round,

We cover on site the SA80's training equivalent, the now obsolescent straight-pull Enfield Cadet Rifle, L98A1, and the L98A2.

The mention in the article of the rifle being capable of use by gloved hands,

does not mean there was just a modified cocking-handle,

as was the case on the alpine models of the Swiss Schmidt-Rubin rifles;

but rather that a fully specialised "Arctic" model of the EM-2 had been produced.

The trials rifle of this type is shown further down this page. 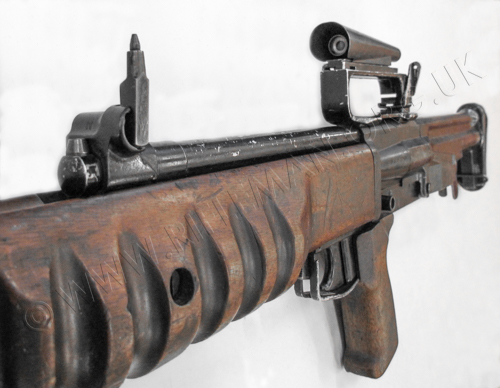 We show below the Prototype of the "Short Rifle", effectively the carbine, or paratrooper's version,

held in the National Firearms Collection at the Leeds Royal Armouries,

in common with the following examples illustrated on this page.

This rifle has the same general features as the Warminster example.

Here viewed from above and below.

And a close-up of the center section. 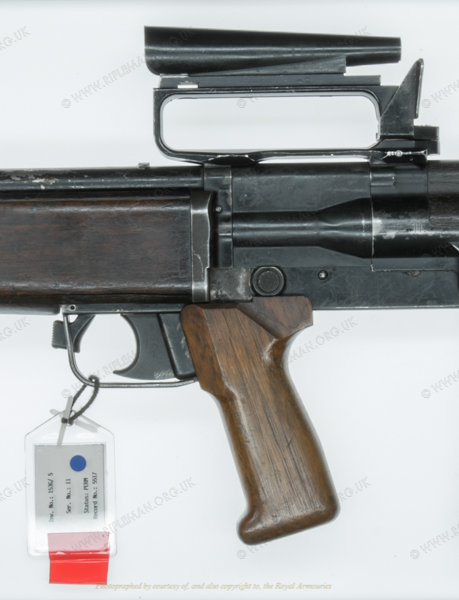 The sight picture through the early optic unit, incorporated into the rifle's carrying handle, is shown right.

The inverted reticle pointer was employed, and magnification was minimal.

The old target is from the Solano training series. 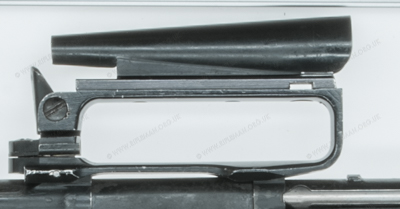 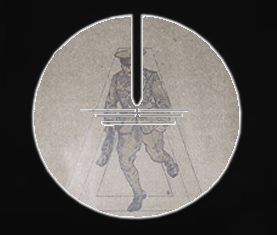 The heavily grooved hand-grip was a quite marked and unusual feature.

The cocking-lever handle is in the upper center-left of the photograph. 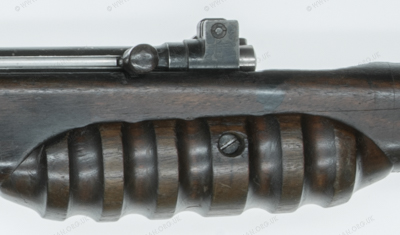 Unusually, the front sling-swivel was mounted on the top of the fore-end rather than below. 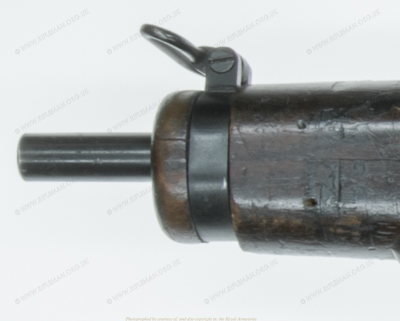 The "straight-line" configuration of the rifle ended with a simple butt-plate with a rubber recoil pad insert,

and the rear sling-swivel at its base. 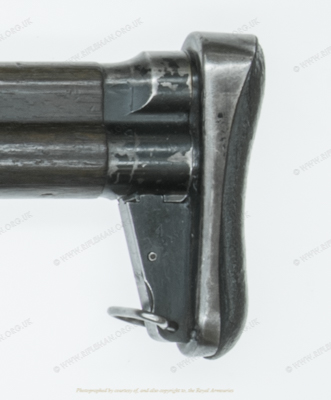 As previously mentioned, number of prototype and trials rifles were produced,

by BSA, of a rifle specifically designed for cold climes.

This was designated the "Arctic Model", with a very special trigger configuration for use by heavily gloved hands. 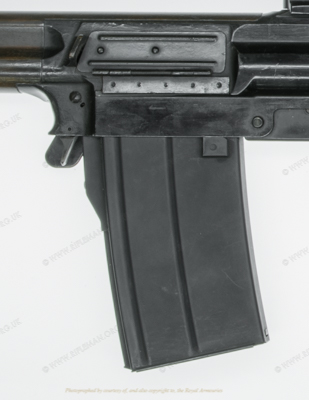 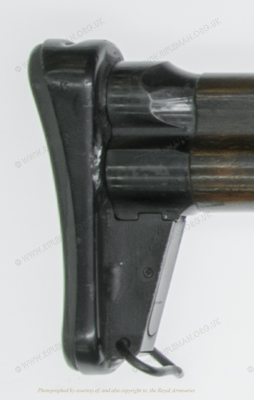 The magazine and ejection port cover are shown left,

and the rubber recoil padded light-weight butt-plate to the right.

The carrying handle with intergral optical sight is shown below.

The rather agricultural appearance suggests that the sight unit

and its mounting would have proved significantly more robust than those

of the current SA80 service weapon,

although the optics were rather less sophisticated. 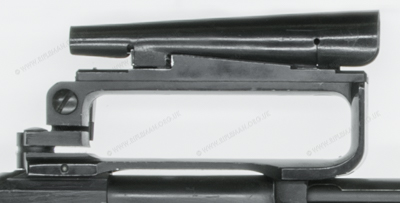 That the rifle can be used with very heavily gloved hands, indeed mittens, is apparent from the photograph below. 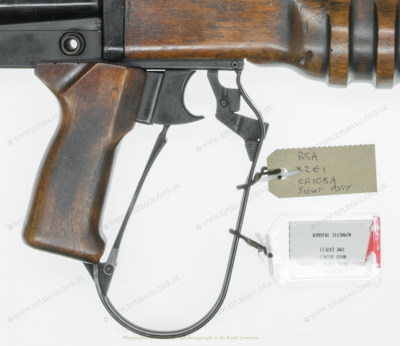 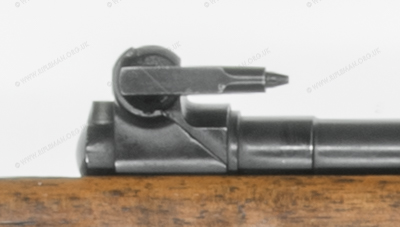 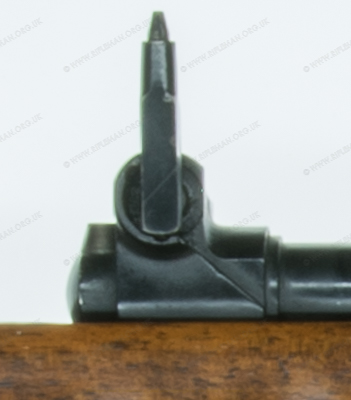 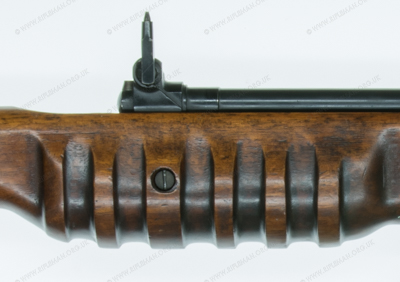 And finally, an image of the magazine, with a .280 inch round on the staggered follower platform,

with another round stood alongside.

View a Pathe news clip of the rifle in use at a contemporary 1950's military demonstration.

This would quite possibly have been the same international event described in the New York Bureau's news report attached to the photograph,

already here illustrated, of Corporal Unworth and a colleague respectively carrying the EM-2 and Lee-Enfield No. 4 rifles.