The Enfield Rifle No.10

A prototype which became the EM-1 Bull-pup assault rifle

N.B. ALL PHOTOGRAPHS ON THIS PAGE ARE COPYRIGHTED TO BOTH WWW.RIFLEMAN.ORG.UK AND THE ROYAL ARMOURIES

For readers already aware of the British EM-2 rifle, of .280in calibre, some interesting facts lie within the history of that rifle's development at the Royal Small Arms Factory, Enfield. It is not generally known that the original designation for the RSAF bull-pup design was as the Enfield Rifle No.9. It was soon realised that this nomenclature had already informally been put into use, so the obvious progression was to award the next number, for Enfield Rifle No.10. For reasons not entirely clear, but probably related to the then imminent change of nomenclature from plain rifle numbers to the currently employed system of "L" prefixed codes, to such as the L1A1 for the incoming NATO selection of the Belgian designed self-loading rifle, (or "SLR") the prototype was named on drawings as the "X1 E1"; both "X" and "E" often being prefixed to the numbers of 'Experimental' weapons.

In fact, there was a quite odd overlap of the old and new nomenclature systems between 1951 and 1953. Not immediately obvious as being on topic, it may be worth mentioning the early introductions under the "L" prefix system.

It is not in our remit to explain the peculiarities of the system, but detail is available elsewhere on the web. Milsurps could be a good start. However, the first "L" prefixed allotment was to the then new sub-machine gun. This SMG was introduced in 1951 as the "Patchett, Mk.II, 9mm" of Sterling Manufacture. The following year this was amended to be the SMG "L2AI (L) 9mm"; declared as ' formerly the Sterling Patchett Mk.ll ', and recorded in the List of Changes under C 8378, EA. W/151. Undergoing continual appraisal and modification, the Sterling SMG enjoyed further entries in the LoC for both the Marks III and IV in 1955. In between times, two other remarkable LoC entries were made.

Having done our best to detail the development of the nomenclature during this period, we should revert to that of the subject rifle.

Shown here is the RSAF General Arrangement drawing of the rifle; 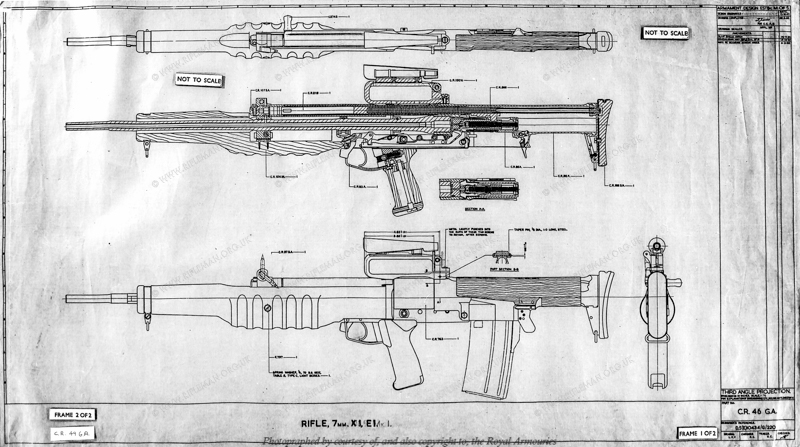 is evidenced by the close-up of the drawing's title.

Just visible beneath the "X1, E1" stencilling is the poorly erased notation on the tracing "No.9 Mk.I"

In addition to the drawings gifted in 2000 from the RSAF Pattern Room,

the archives of the Royal Armouries hold eight lists of the drawings for the rifle.

The lists dated 7th. October 1952 note the amendment that the

The alteration being over-stencilled, as on the drawing. 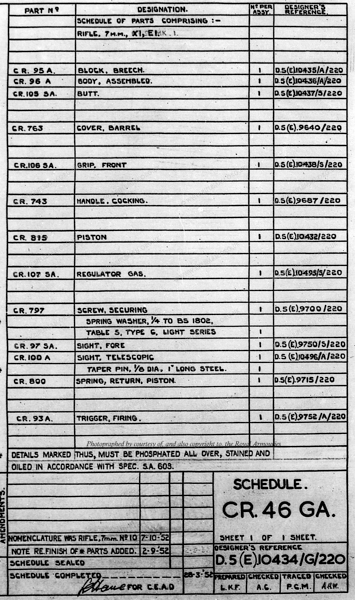 A comprehensive article, entitled "A Study in Design" was written in the 1970s by J.W. Sayers,

about the development of the EM-1.

Below is a searchable flip-page facsimile of that article, which may take a few moments to display.

If you wish to read more of the EM2 Bull-pup rifle, then,

View a short video of the EM-2 rifle shown in use as part of a 1950s military demonstration.