A Trench Periscope adaptation of the Lee-Enfield Rifle

modified for use over a trench parapet.

The unit can be fitted moderately quickly to any SMLE rifle without need of any tools;

the parts clamping in place and being tightened with wing-nuts.

It is of a design patented by J. Chandler in September 1915.

( The two large rectangular vertically orientated brackets, each with two silver screws, are only the display wall mounting supports) 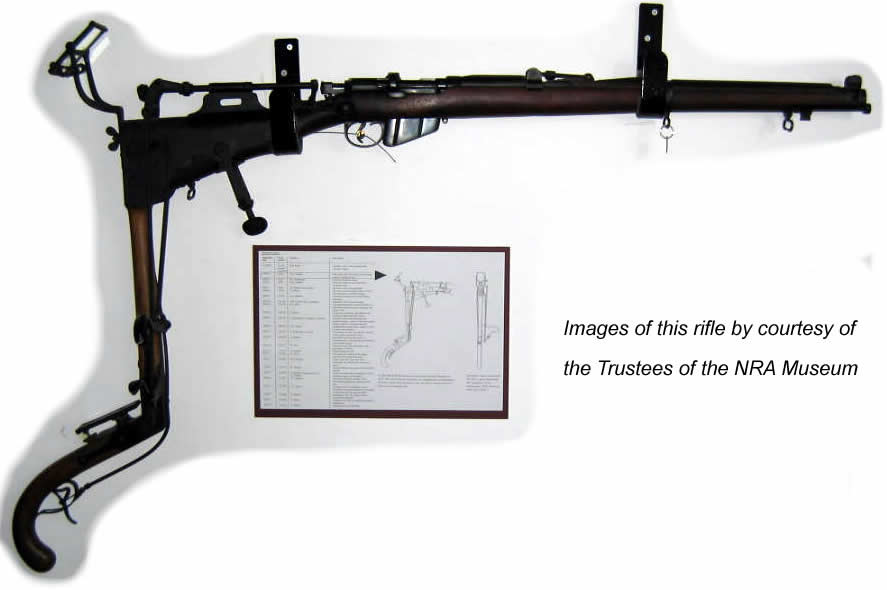 Below and right, the Patent application for the equipment,

connected to the main trigger for firing from cover. The invention consists mainly (1) in combining with such a stock

means for actuating the breech-bolt, and (2) in special means for securing the auxiliary stock to the ordinary butt

stock. The bolt is operated by a reciprocating and rotating rod N1 adapted to be rotated by a crank 01, link P, and

lever P', and to be reciprocated by a bell-crank Q, link Q1, and lever R. The top of the auxiliary stock is provided with

a saddle-piece B adapted to embrace the ordinary stock and to be secured by a screw clamp D. The lower end of the

stock is formed with a pistol grip. The hyposcope mirrors E, I are hinged to brackets F, J on the auxiliary stock, the 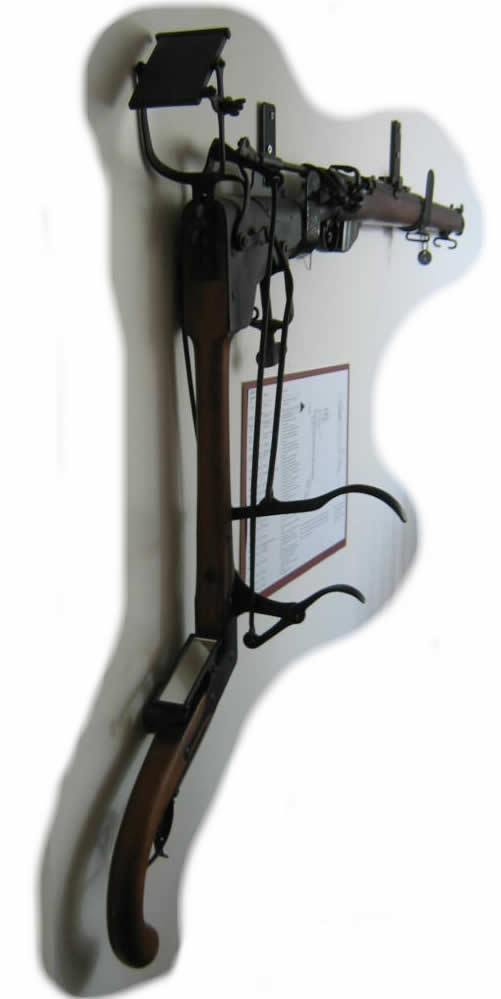 It can be seen, in the image below,

how the design permits not only the firing

of the rifle from a protected position using a remote trigger,

but also the actioning of the bolt; there being one lever to rotate

the handle to unlock/lock the bolt,

and another to draw the bolt open and push it home.

The arrangement therefore allows of the firing of

before any necessity to dismount the rifle

from its (probably hidden) position.

Below: The main unit is held in place by single clamp on the underside of the butt-stock 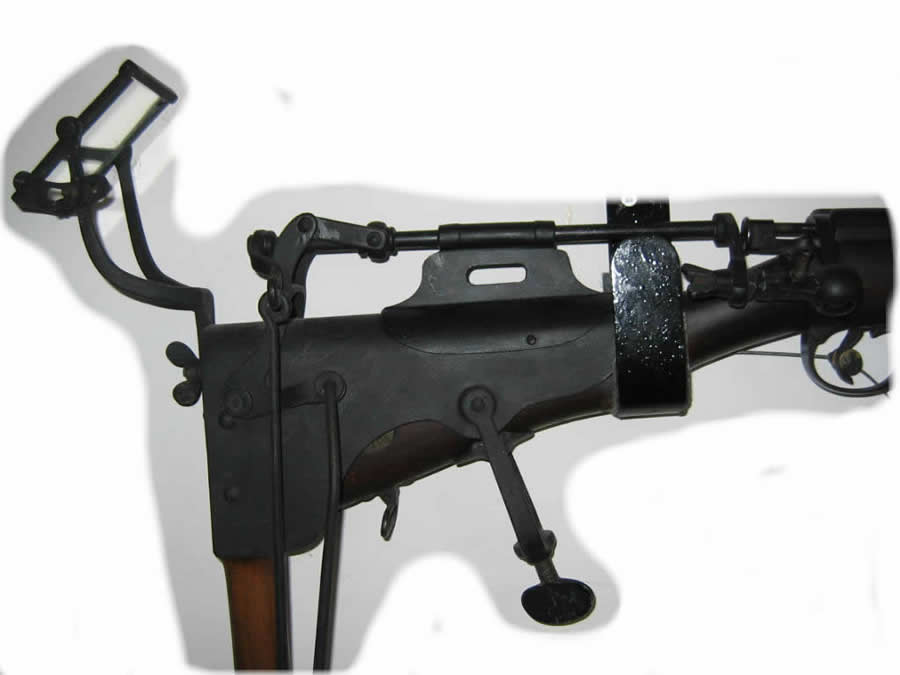 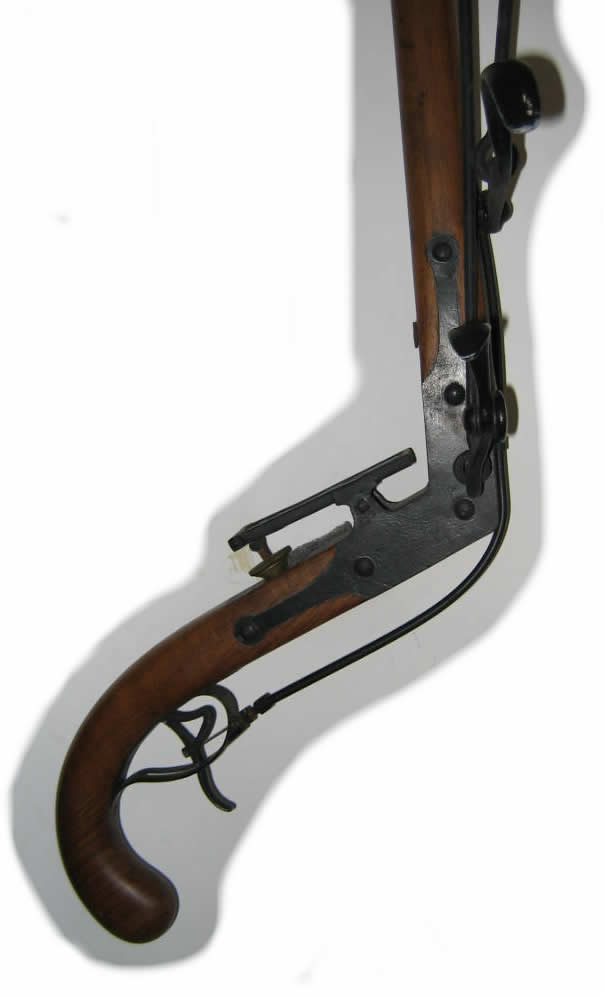 Side view of the remote arm

and the lower periscope mirror.

The bowden cable, leading to the rifle's trigger

from the remote trigger,

can be clearly seen.

Below: the socket clamp making the connection to the bolt-handle. 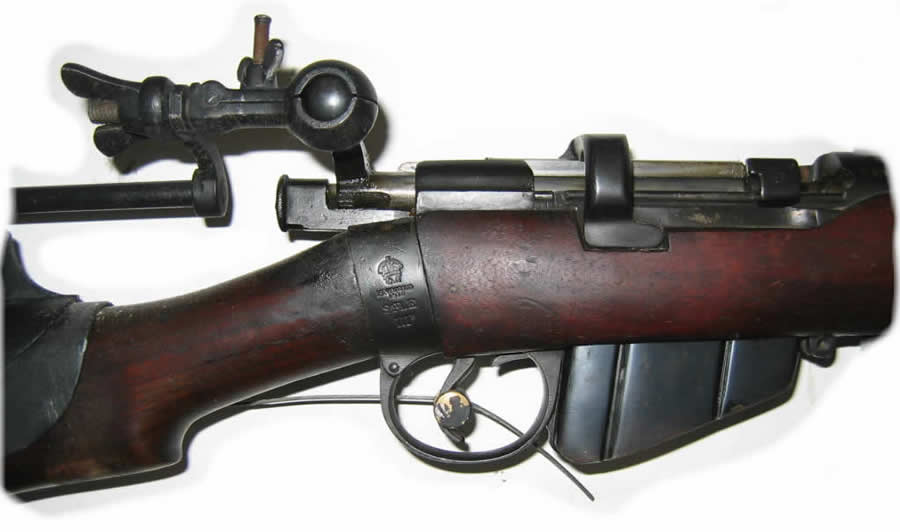 It can be seen, above, that the unit is fitted to a Rifle, Short, Magazine Lee-Enfield, No.1 Mark III*

Above: bolt closed, and clamp shown locking the end of the Bowden cable 'inner' to the trigger.

Above: the rifle's action viewed from above.

Below: the sight picture 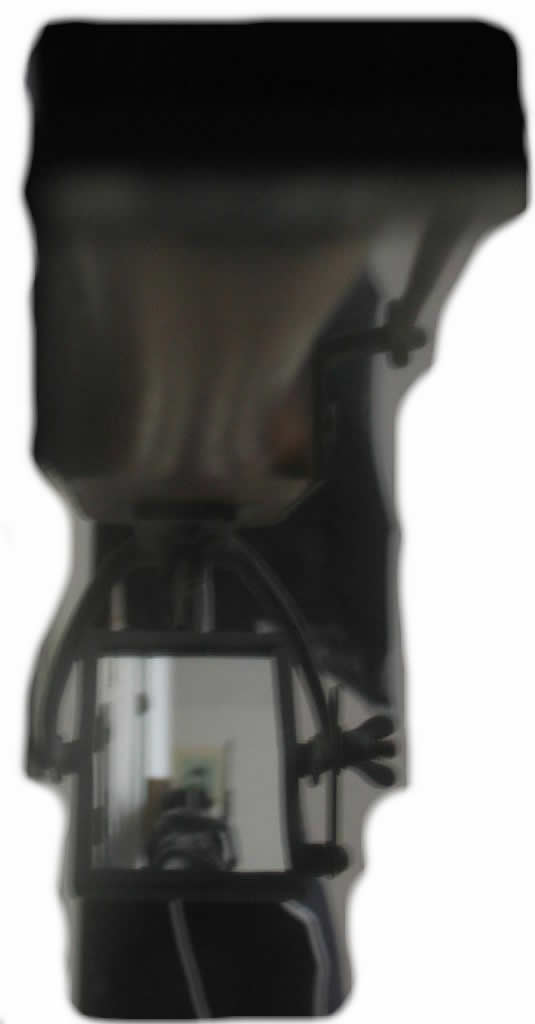 Perhaps not the clearest image for the

purpose, but it should be possible

to see the sight picture obtained

in the lower mirror which lies

just above the remote trigger unit.

The rather indistinct image in the mirror

is that of a "sand and sky" type

viewed over the rifle sights.

Interestingly, less than a week earlier,

on 11th. September, a patent was granted

to an applicant named Gérard

for a remarkably similar design

Relates to guns having hyposcope attachments for sighting from cover, and consists in the combination of a special mounting

for the hyposcope on a depending or set-down stock, and an auxiliary trigger connected to the main trigger by a Bowden wire or the like.

The hyposcope is mounted by two pairs of trunnions k, m, which enter slots o, n in side plate;; fixed to a depending extension of the stock.

The upper stocks are vertical and the lower ones curved, so that as the hyposcope is elevated its inclination is automatically adjusted.

For Enfield and Lee-Enfield training rifle accessories and adaptations,

.There purely for observation rather than sighting,

and similar in purpose to the standard,

and the purpose-built tubular steel

much favoured by officers as personal equipment,

there were the private-purchase easily portable type

such as the Vanderlip,

shown here because it can loosely be described as

an adapter unit to a Lee-Enfield rifle -

or, at least, the bayonet of that rifle.

Should you have an example of an unusual

and be willing to provide photographs,

then we would be grateful to receive details.

anypublished images would be afforded.