The earliest formal introduction of a spring-bayonet fencing musket was in 1863,

when approval was given for a design submitted by Wilkinson & Son

for a musket suitable for use "in gymnasiums".

The "spring" for the bayonets was, until a modification, made of India rubber.

Perishing rubber necessitated this alteration approved by a List of Changes (LoC) entry No. 5770 of 13th. March 1889.

Replacements were made as originals became unserviceable.

A particularly early version of fencing musket was manufactured from the stock of a standard Pattern'53 rifle.

The "barrel" was a plain tube that carried the sring and plunger for the button-ended "bayonet". There being no upper handguard, it was necessary to reinforce

the fore-end woodwork foreward of the middle barrel band. Three steel strips were let into the wood between the barrel band and the nose-cap;

one strip either side, and a third underneath. In use, these muskets took quite a beating,

and the strengthening was insufficient to prevent the upper edges of the fore-wood from splitting away. The rather parlous musket in our photographs has evidently led a hard life, and at some point has had the "bayonet" rod removed, along with the nose-cap, perhaps to afford a "wall-hanger" in a home or pub.

The Royal Armouries in Leeds, now custodians of the collection from the old Enfield Pattern Room, hold this Sealed Pattern Rifle, of 1863 date, that has a solid "bayonet" attached to the RHS of the barrel, and to the original bayonet lug of the nose-cap.> The "blade" is made with a mushroom head rather than a separate round "button".

Illustrated by kind permission of the Trustees.

The style of musket with handguard, shown in the images below, was introduced,

as the Mk.IV, in 1894, shortly after approval of the Martini-Henry Service Rifle,

and was amended, with small modifications, to the Mk.V in 1896.

Below: the drawing of the Martini Henry model of fencing musket

An example of the conversion of the Martini-Henry

The removal of the action and its replacement with a wood infill is below evident.

The markings below, of the original rifle, afford an opportunity to detect which Mark is being viewed.

...... which, in its lifetime, found its way to India; being stamped with the cartouche of the Kirkee Arsenal.

Three years later a stronger bayonet was introduced, and replacements made as failed units were returned to stores.

There was no change in nomenclature of the musket.

By 1902, the introduction of the Mark VI saw the use of ash wood,

whereas previously walnut had been specified.

A further model, given the nomenclature " Musket, fencing, short (Mark I),

was approved and a pattern sealed on 14th. November 1904.

This short version was to provide a representation of the

In addition to the purpose-built muskets here illustrated,

in September 1907 another completely new model was approved -

- the Mark II version of the Musket, fencing, short.

This was a conversion of the Martini-Henry rifle,

itself already having been superseded by the bolt-action Magazine Lee-Metford/Enfield long rifles and,

indeed, the even more recently introduced and just mentioned S.M.L.E..

Being of similar overall length to the latter weapon, the Mk.VII fencing musket

Below: the 2nd. Battalion of the Durham Light Infantry, Cork- ca. 1908

A further similar conversion, approved in in March 1909, became the "Musket, fencing, Mk.VII" .

The Mark VIII and IX muskets were both introduced in April 1912.

The former being a conversion of the Rifles, M.E., Mks.II & II*,

whilst the latter was converted from the Magazine Lee-Metford Mk.I*.

The Marks IV and V muskets were declared obsolete in October 1909.

By 1925, all Marks to IX had been declared obsolete,

with only the Marks X, No.1 and No.2 remaining in service.

An unusual conversion of the Short Magazine Lee-Enfield is shown below.

The rifle used was a commercial model manufactured by the Birmingham Small Arms Co.,

and it is possible, but not confirmed, that the conversion was done by the factory.

Images by courtesy of Joe Salter.

The "barrel" has been increased in diameter to accommodate the bayonet rod.

Below left: the butt disc carries the marks " "G. VELHO"

The action and bolt appear as original.

The necessary large radiussed "button" is screwed firmly to the end of the bayonet rod.

The Greener Company manufactured many rifles and shotguns,

but one of their lesser-known wartime products was their fencing musket.

These "weapons" continued the series of devices used for bayonet and hand-to-hand fighting practice.

Two versions are illustrated above. The upper, longer, example is the Greener product.

The lower musket is completely unmarked and of unknown manufacture,

and quite a number of manufacturers were contracted to build these training devices. 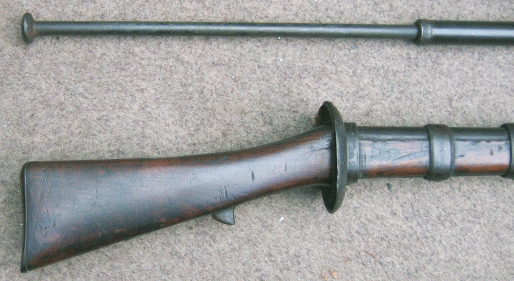 The Greener model is straight-stocked and plain,

whilst the unidentified model hasa hand-guard

and under-lug to prevent the hand slipping back .

The button ended dummy bayonet is spring loaded and retreats

into the musket body when pressed against an object.

There is no difficulty in dating the Greener musket,

with the year of manufacture and their company name and factory address.

and the Government's War Office "Broad Arrow" mark is most prominent.

Fencing muskets, of the type shown earlier made by Greener,

were produced right up to the end of the Second World War by several companies,

including Webley & Scott and Westley Richards.

At what must be practically the end of the line for such fencing muskets,

is the Westley Richards' model below.

The butt is provided with an even sturdier steel butt-plate than that of a standard issue rifle.

Being a product of the Westley Richards Co. Ltd., it is so marked.

As far as we are aware, bayonet practice with the current SA80 bull-pup rifle is limited to

the classic rundown with the service rifle (bayonet fitted, of course) to attack what used to be a straw-filled dummy,

as has been well demonstrated in a number of episodes of the "Dad's Army" television series.

Whether there are still any dummy rifles employed for hand-to-hand practice we would be grateful to hear.

If you know something of this, please advise us a.s.a.p!

Return to: <TOP of PAGE