Click here to see BSA and other Target Rifles

The famous Swiss company of Hämmerli is probably better known for its match target pistols than rifles, which pistols have competed highly successfully over many years in International competition. The company has also manufactured arms for the Swiss Government and, from our point of view, one of their most relevant contracts was the conversion of the Swiss Schmidt Rubin service rifle to .22 rimfire (Long Rifle) calibre for training purposes and to provide an economic small-bore rifle for the Nation's huge shooting populace. The most common of these conversions was of the Schmidt Rubin K31 short rifle. At their Lensburg factory, Hämmerli also manufactured the Spanish 'Star' semi-automatic target pistol under licence in the form of the Walther 'Olympic', a name which closely resembled that used for one of their premiere .22 target rifles, the 'Olympia'.

The Company's target rifles have, over a number of years, provided small-bore target shooters with a typically effective and precision-engineered piece of equipment, but morerecently they have concentrated on target air-rifles and pistols, with their cartridge rifles being largely sporters. We have been able to trace very little in the way of literature on the target rifles, and the page is thus unavoidably rather sketchy. Indeed, several of the best known authors on small-bore target-shooting have failed even to mention the likes of the Hämmerli and German Haenel target rifles, in favour of the better known and more popular Anschutz, Walther and Feinwerkbau products. Ironically, for better or worse, Hämmerli is now a subsidiary company of the German Carl Walther GmbH Sportwaffen concern.

We have been afforded some images of a Model 820 by a reader - and these are shown below. We have also illustrated a leaflet of the very similar, and World Record holding, "Model Smalbor" of early 'Fifties' vintage. The rifle is reminiscent of the Finnish 'Lion' here in its three-positional guise with the mighty die-cast alloy butt-hook and buly palm-rest..

Below, the heavy stamping of the model number on the front of the receiver body.

The rear-sight, with its beautifully knurled and easy to use elevation and windage adjustment knobs, is to be seen on no other rifle; and neither is the highly unusual bolt-handle configuration - shown raised.

The loading platform is clear and quick-loading. The overhead extractor is evidenced by its clearance ramp at the top of the chamber.

The bolt is shown below to better illustrate the odd handle arrangement, no doubt as practical as any other, and, when closed, neatly lying flush with the wood-work at the side of the action.

Below, the details on the advertising leaflet

Barrel made of high-grade British special steel, with a guaranteed performance of 100 points on the machine in a circle, 12 mms. All parts of the locking mechanism made of alloy steel, hardened and ground to resist wear. Fitted-in patented special draw-pull trigger, independent of the extra striker spring, ensures a uniform and light performance. New firing pin, reduced to 6 mms. The stock is made of fine walnut or elm wood, the butt is of modern shape with a pistol handle and a thumb hole, finely polished. Adjustable butt heel plate. Haemmerli diopter with novel adjustable pin-hole sight, sliding on a rail and situated extra low. Tunnel foresight with exchangeable inserts. The diopter sight can, if desired, be replaced by an open patent sight. For shooting in standing position an adjustable hand support is provided which is movable in all directions. 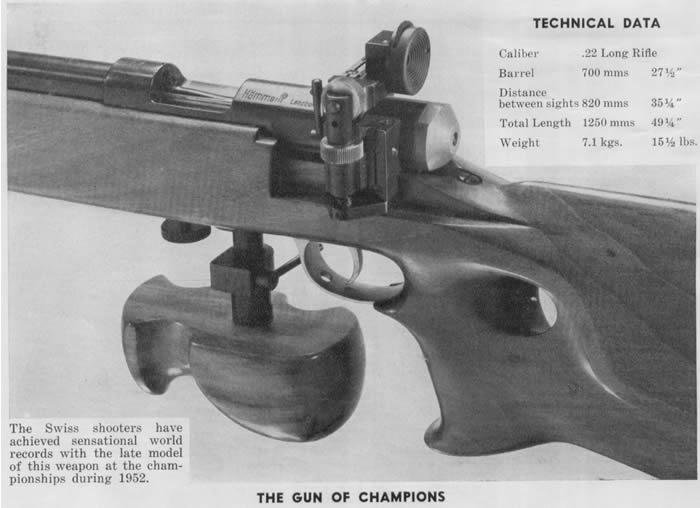 The Swiss shooters have achieved sensational world records with the late model of this weapon at the championships during 1952.

THE GUN OF CHAMPIONS

Should you hold any literature or further information on these