The Infantry & Small Arms School Collection at Warminster also holds a most unusual variation of what is catalogued by them as a Pattern '13 rifle. This a not unreasonable annotation, as the rifle is evidently built around a heavily modified version of the Mauser action on which the trials P'13 and production P'14 rifles were based. In the mid-1930s the War Office was preparing for a potential requirement for the use of small-arms to combat light armoured vehicles. Already in the pipeline was Captain Boys' design for an infantryman portable purpose-built anti-tank rifle, and his Boys .55 calibre Anti-Tank Rifle is covered on this site, including in its several prototyped configurations. Another option, even more portable, was a high powered individual infantry weapon. A separate development team at Enfield was led by Captain J.R. Ainley, and, in common with Captain Boys' anti-tank rifle, the resultant high velocity weapon shown on this page became known as the "Ainley Rifle". Very shortly before the commencement of the Second World War, in mid 1939, the trialling of two prototypes was already under way. The proposal had been for a weapon producing a muzzle velocity in the region of 3,700 feet per second, and the testing of various calibres of ammunition up to this point resulted in the selection of a .276 inch cartridge. The calibre of this round, however, was the only similarity to that of the original P'13 rifle; it was effectively a magnum cartridge. Two prototypes were built at Enfield and, subsequently, orders for four trials rifles were given; two for production by the Birmingham Small Arms Company, and two by Accles & Shelvoke Ltd. The former two were serial numbered 3 & 4, and the latter pair 5 & 6. No.3 is the Warminster rifle illustrated on this page, and No.4 was originally in the Enfield Pattern Room, but now lies in the National Firearms Collection at the Leeds Royal Armouries.

This Martini-actioned rifle shown below, currently in the U.K., is something of a hybrid. It is fitted with a heavy Sportco "Clubmaster" target barrel.

We suspected that the rifle was not fitted with a professionally manufactured fore-end, it having a poorer finish than the butt, but C.Q. of Adelaide advises us (see notes at bottom of page) that he believes this was standard production practice to keep costs to the minimum.

The action is that of a Birmingham Small Arms Co. ( B.S.A.) manufactured Martini Cadet rifle, probably originally in .310 inch calibre. The action body has been refinished and all original markings removed, with the exception of the familiar kangaroo/wallaby insignia stamped on the top of the action in front of the receiver. This marking is exactly that put onto those Commonwealth Martini Cadet rifles sent to New South Wales from the U.K. under contract. The action falling-block has the cut-out on the RHS for the cocking indicator, but the indicator lever itself has been removed.

It is suspected that this may be a further custom conversion of the Sportco "Clubman" rifle, itself derived from the BSA Cadet Martini, or simply a later Sportco Model altogether - further customised. If this is so, then the original underlever has either been replaced, or reshaped, in order that it can be accommodated within the curve of the semi pistol grip stock.

This buttstock is quite similar to that fitted to a BSA Model 12/15 rifle, although the cheek-piece is slightly more pronounced. The fore-end furniture has a heavy vertical taper resulting in a very wide base into which has been let a handstop/ sling attachment rail with drilled and tapped adjustment holes, typical of the 1950s. The fore-end is fitted to the barrel, as shown, by a single bedding bolt but, instead of the bolt being screwed directly through the woodwork into a tapped blind hole in the barrel - as with the BSA TARGET RIFLES - a spacing bar has been screwed into the barrel, the fore-end woodwork recessed to receive it, and the fore-end mounting screw tightens into the base of the bossed cylindrical spacer.

screwed into the left hand action side face at the rear. This gives the appearance of the sight fitting utilised on the

The fore-sight is a standard FS22 model tunnel sight, with exchangeable steel elements, as

For sale in the U.K. comparatively recently in Martini timeline terms, probably in the Sixties or early Seventies, these .22 rimfire rifles were on offer for around fifteen pounds, with the.22 Hornet centre-fire model about two pounds, ten shillings more. 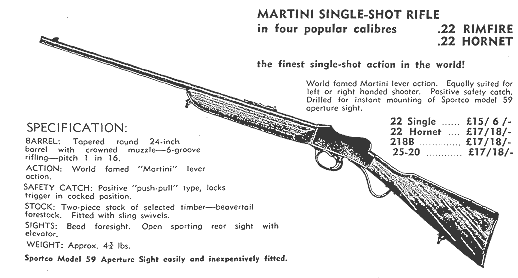 To add to the information on this rifle, we copy details kindly passed

"I live in Sydney and can remember the Sportco conversions when they were first offerd during the 1960s. My smallbore club still has one. They were originally BSA .310s which were sold off to the public commencing in the 1950s. Sportco clearly bought some too, making .22, .22 Hornet and .25/20 sporters by replacing the barrel and forend. The original buttstock was retained and a button safety installed in the trigger-guard. The target rifle had all new woodwork, a heavy barrel of Sportco's manufacture and Parker-Hale sights. The lever was forged, the cocking indicator removed and all markings buffed off, except for the kangaroo. The rimfire conversion was effected by either removing or adding metal to the locking lugs.

These rifles were, at the time, a poor man's BSA and never achieved great popularity. Sportco barrels were excellent though, and I have one (same as the Clubman) fitted to a .222 rimmed which my gunsmith made in the mid 60s. It shot half-minute groups.

Sportco also made a bolt-actioned target rifle at around the same time. Like the Martini it had Queensland maple woodwork and Parker-Hale sights. I think it was available up until the firm sold out to Omark around 1970."

Another Australian correspondent reports that:

" These rifles were made by the "Sporting Arms Company" , Sportco, in my hometown of Adelaide in South Australia . The rifle pictured appears to me to be as issued, and the same as my own. The under-lever is standard. The fore-ends were often of different timber from the butt. The rifles were cheaper to buy, and available, when most BSA Internationals were private imports at much greater cost. The latest issue (Autumn 2005) of the periodical for the Sporting Shooters Association of Australia (The Shooters' Journal) contains a two-part history of this South Aussie icon company. Sportco made rimfire, centrefire (usually .303 ,303.22, 303.25 etc.,) and 22-Hornet rifles on SMLE Actions, plus shotguns for sporting use as well as their target model rifles as above, along with the Model 44 7.62 mm full-bore rifle. Omark bought them out in the 1970s .

Best of luck and thanks for an interesting web site. C.Q."

An image of another Sportco Martini conversion has been kindly sent to us by a reader from Australia. This rifle is doubtless another .310 Cadet rifle with the calibre changed to .22RF and the fore-end woodwork shortened to bring it into line with the style of original Martini target and sporting rifles of the day. It will be noted that no target type aperture rear-sight or tunnel fore-sight has been added to this example, suggesting it to have been intended more for sporting use.

Our coverage of Sportco Rifles is limited to the company's conversions of B.S.A. Martini-actioned rifles. If you are seeking greater detail of the Sporting Arms company, their history and later rifle production, we recommend a visit to the Australian website Sportco.org

and BSA and other small-bore target rifles

Return to: Top of Page