For more on W.W. Greener, see Greener on Ammunition and the Greener "Queen's Cup" Martini Rifle, plus Greener's Fencing Musket and other Greener's Martini target rifles

The Greener company was for many years at the fore-front of miniature-calibre rifle production, probably second only to B.S.A., although Vickers Armstrong made serious inroads into the market for a few short years, and the likes of C.G. Bonehill were hot on their heels. "W.W." was a fervent believer in such rifles being important in the training of rifle shots - at a a time when the country was acknowledged to be in great need of competent marksmen.

To that end, Greener wrote much on the subject, in common with H. Marks and Luke Tippins. Already well known for his tome "The Gun and its Development", which was first published in 1881 and had reached its famous and final Ninth Edition by 1910, Greener followed up in 1900 with "Sharpshooting for Sport and War", in part aimed at promoting the message advanced nationally by Lord Roberts - of encouraging all able-bodied men to learn to shoot (at a time when any notion of women on the front line was anathema).

To further the campaign Greener also wrote widely in many publications, whilst obviously, at the same time, very effectively promoting his manufacturing and marketing interests. In its heyday his company was a significant manufacturer, with a World-wide market, and the company exisits to this day. Their book "The Greener Story", by W.W.'s great grandson, Graham Greener, is a most worthwhile read. A précis of the company history is available on their website here.

One of the company's most succesful small-bore target rifles was their Miniature Club model. Akin to the BSA Model 12, the Greener Club rifles were produced in a number of configurations; standard (half-stocked), takedown, and military-stocked (musket style).

The take-down model is shown next.

This image rotates horizontally on the spindle.

This image rotates on the bore axis.

Below: the barrel mark, partly obscured at each end by threaded holes for a previous scope fitment,

Next, an image of the breech with the falling-block lowered ready for loading a round. the cocking indicator is just visible in its slot on the nearest side of the receiver. This just protrudes above the breech block when the rifle is cocked, and drops out of sight when the rifle is fired.

The extractor can be seen between the breech-block and the breech chamber. The brass-coloured ring around the chamber entrance is the brazing line indicating that the barrel has been re-sleeved. 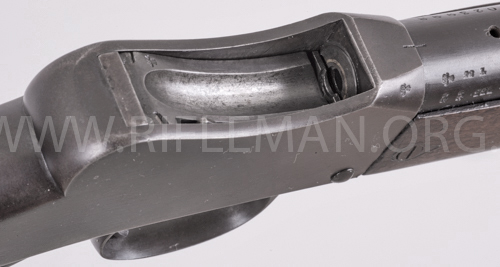 Below: the slotted screw at the rear of the fore-end woodwork holds the out-of-view plate on the opposite side, against which the take-down release lever lies when in the locked position. 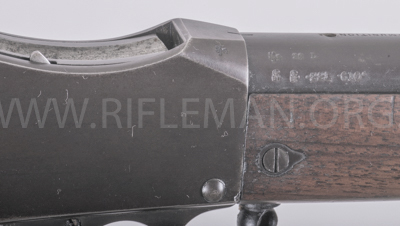 The take-down release lever lies against the stop-plate - on which a pip prevents the lever from being tightened past the required position. As the lever is rotated anti-clockwise, the thread on the fulchrum pin runs the lever away from the action side - clearing the stop pip. The fore-end has been fitted with a screw-eye to hold the rear hook of a two-point target shooting sling. 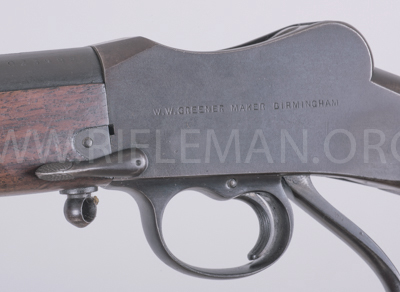 The serial number is of the usual zero commencing Greener series type. 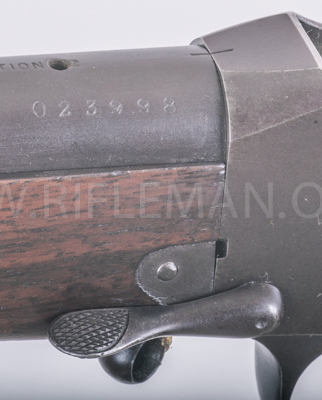 Once the take-down lever has been released sufficiently, the barrel and fore-end can be unscrewed from the receiver. The split in the front of the receiver, beneath the barrel thread, affords the clamping of the barrel into the receiver when the locking lever is tightened.

This system is a Greener Patent, details of which can be found on the page for the other Greener Martini Rifles. 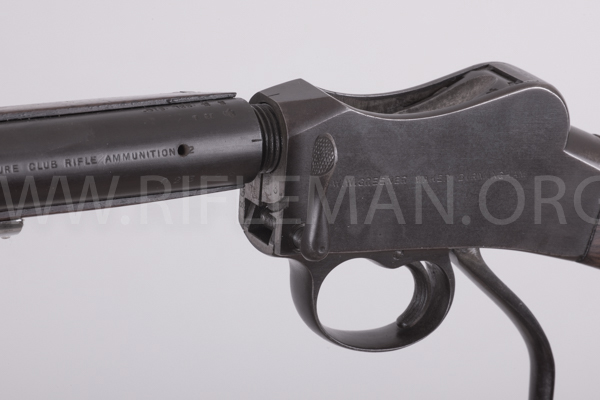 The fore-sight is of the fold-over type, with a bead within a ring which, when folded forward, raises a plain 'barleycorn' into position.

This sight is to Greener's pattern S.708, and can be found illustrated on page 24 of their catalogue of 1914. 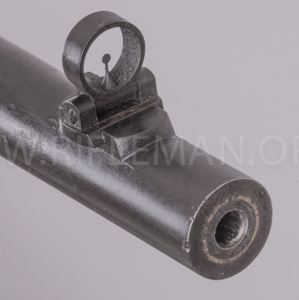 The original barrel-mounted rear-sight, that can be seen in either of the rotatable images earlier in this page, is of the s.738 plain tangent type - shown on page 27 of the catalogue. Note the absence of a 'V'-notched block on the front of the leaf, as on the S.739 Cadet version on the next rifle covered on this page. Both these sights cost three shillings and sixpence proir to the commencement of the First World War. The similar S.740 model, at 7/6d, boasted the sophistication of a windage adjustment screw. 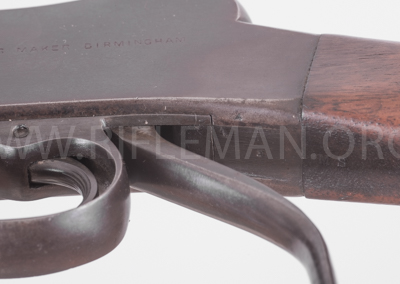 Above: usually hidden by the under-lever, the butt-stock wrist carries a stamping of "M S" 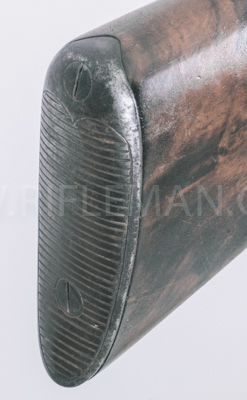 Below is shown the rather more rare "Musket" model of Greener's Miniature Club rifles built on the Martini small-action based on the Birmingham Small Arms receiver, such as the B.S.A. Model 12.

The next three images can be rotated and zoomed, either as initially loaded or full-screen for higher definition. 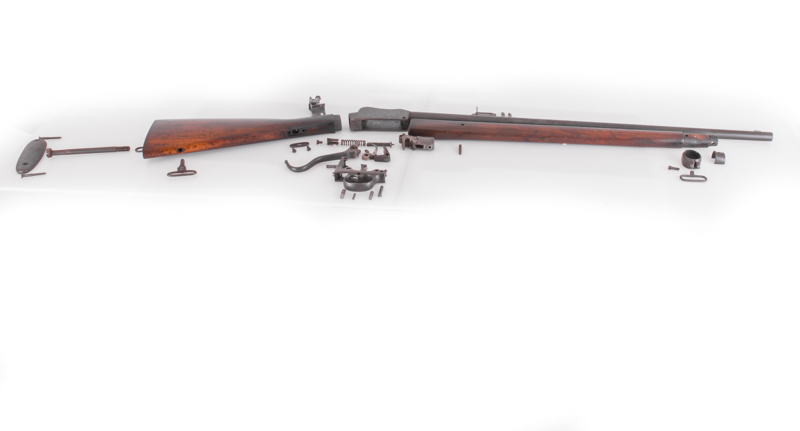 - the BSA No.8 model, with a revolving six-hole eyepiece.

Click the static image below for a higher resolution of this 'exploded' view.

This rifle was also available in both Morris .297/.230, and a similar rifle in .310 Cadet calibre, the "Sharpshooter's Cadet", albeit with a cleaning rod and additional middle barrel-band.

The latter was presumably in competition with B.S.A.'s .310 Martini Cadet Rifle, and the further 'militarisation' of the extra band and cleaning rod

would have offered to the market a small-action lightweight rifle that bore a significant resemblance to the converted Martini-Henry service rifles.

A more economical half-stocked "Sharpshooter's Club" rifle was also to be found on page 15 of the contemporary Greener Catalogue shown at the bottom of this page, but this was made on the large-frame service rifle Martini action. 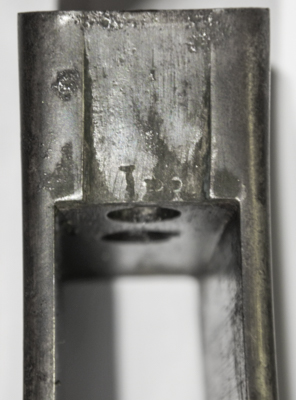 This quite rare example of the miniature cadet rifle carries no serial number, but only the assembly numbers stamped on the various parts of the action, although the number " 1 " prefixes several of these markings. Whether this may be an indicator of a very early, or a prototype model, of these rifles is certainly a consideration, because, as already mentioned, the majority of Greener's firearm production was given serial numbers starting with " 0 ". We are reasonably sure that it is not a case of the serial number having been erased by historical removal of barrel corrosion. Even though the upper barrel manufacturer's marking is less distinct than one would expect with a rifle that had not been refinished at some time, the proof and other marks near the receiver are very clear.

The barrel has futher marking just forward of the receiver, where " AMMUNITION .22 " is stamped centrally above the proof marks on the right-hand-side.

There are also a pair of lining-up marks across the flat machined over the joint between the barrel and receiver.

These are some of the heaviest such marks we have ever seen, terminating at each end with a heavy dot-punch. 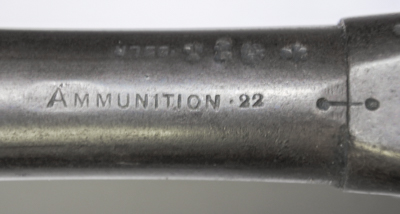 As the barrel has been sleeved with the Parker-rifling system, it is probable that these were added when that work was done. 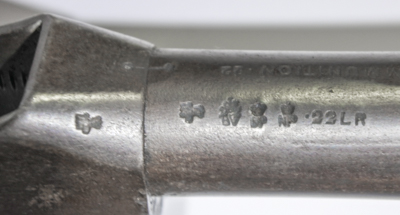 Above: the standard civilian Birmingham proof marks are still clear on the barrel and receiver, and the calibre stamped as " .22LR ",

the 'Long Rifle' cartridge being specifically shown at a time when War Office Pattern Miniature Rifles were still being stamped with " .22L ",

seemingly and confusingly representing the earlier 'Long' cartridge when the LR round could also be used.

Below: beneath the barrel behind the stock-pin lug is the number " 37 " stamped, with what appears to be a " C 1 " immediately underneath.

Above right: ahead of the under-side of the receiver is repeated " 1 HP " mark further referred to lower down this page; ahead of that, the initials " W.H. " are stamped. If you have knowledge of the significance of these we would be grateful to hear. 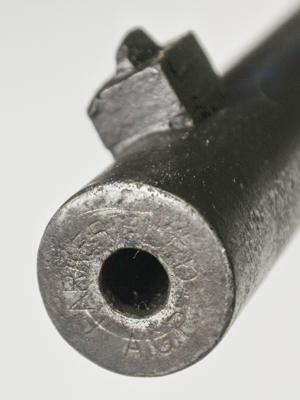 Above: the solder ring in the muzzle crown records the presence of a barrel sleeving,

which is confirmed by the still just detectable circular stamping made at the A.G. Parker's works in Birmingham.

that they have effectively been "shot out", and subsequently required refurbishment.

Incidentally, such resurrected barrels are still providing sterling accuracy, testament to the quality both of the steel from which the tubes were made,

and of the workmanship. When acquired, this rifle was in extremely poor condition, the left side of the action being very heavily pitted -

- probably the result of having been stored in a loft or garage for recent decades, and lying against something holding considerable humidity.

We approached the demanding cleaning process with a sympathetic modus operandi, not wishing to adversely affect the obvious age of the rifle or reduce the markings to feathered shadows by heavy linishing. Glossy re-finishing work is not in " the spirit of the original. 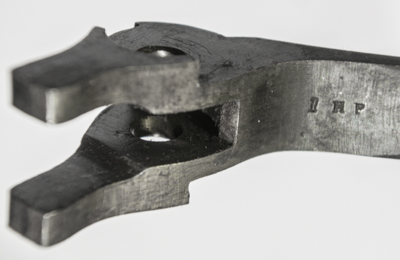 If you know anything of these markings we would be grateful to hear. 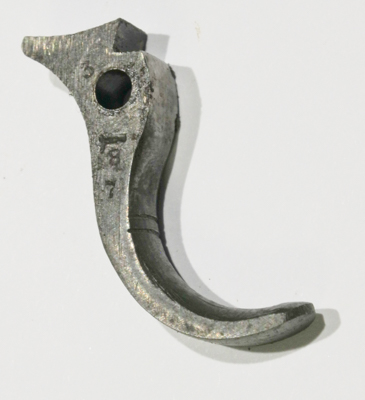 The " 7 " is repeated on the cocking indicator below. 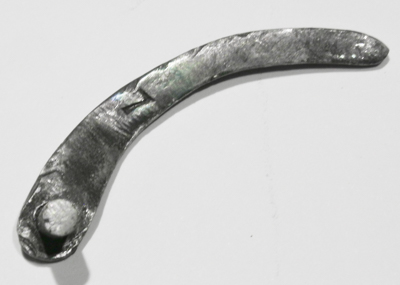 Whilst the side, in the groove machined for the cocking indicator, is stamped with the same " 1 H P " as is the under-lever. 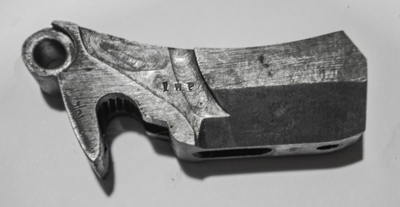 The proof mark remains clearly on the left rear of the breech-block, the loading groove of which

retains the evidence of the now carefully cleaned corrosion.

The rear-sight was photographed while the wood stocking was removed from the barrelled action for the refurbishment of both.

The Greener S.739 Greener Cadet sight's mounting block is calibrated only for the usually anticipated 25, 50 and 100 yards

for use with the "V-notched" sight block screwed to the front of the leaf, replicating the rear-sight of the full-bore Martini-Henry and Martini-Enfield Service rifles.

There are no calibration range figures stamped on the leaf for use when it is raised and the V-nothched slide is employed; however there are three lines engraved, which may represent 150 and 200 yds - just attainable with the .22 Long Rifle cartridge, but the same sight would of no doubt have been utilised on the .310" calibre rifles. 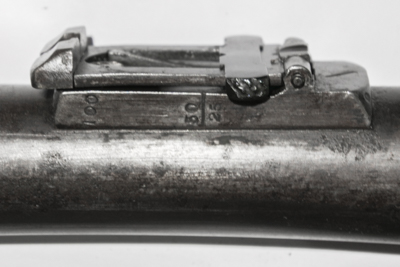 A flip-page facsimile of the 1914 Greener Catalogue is available by clicking the image below. 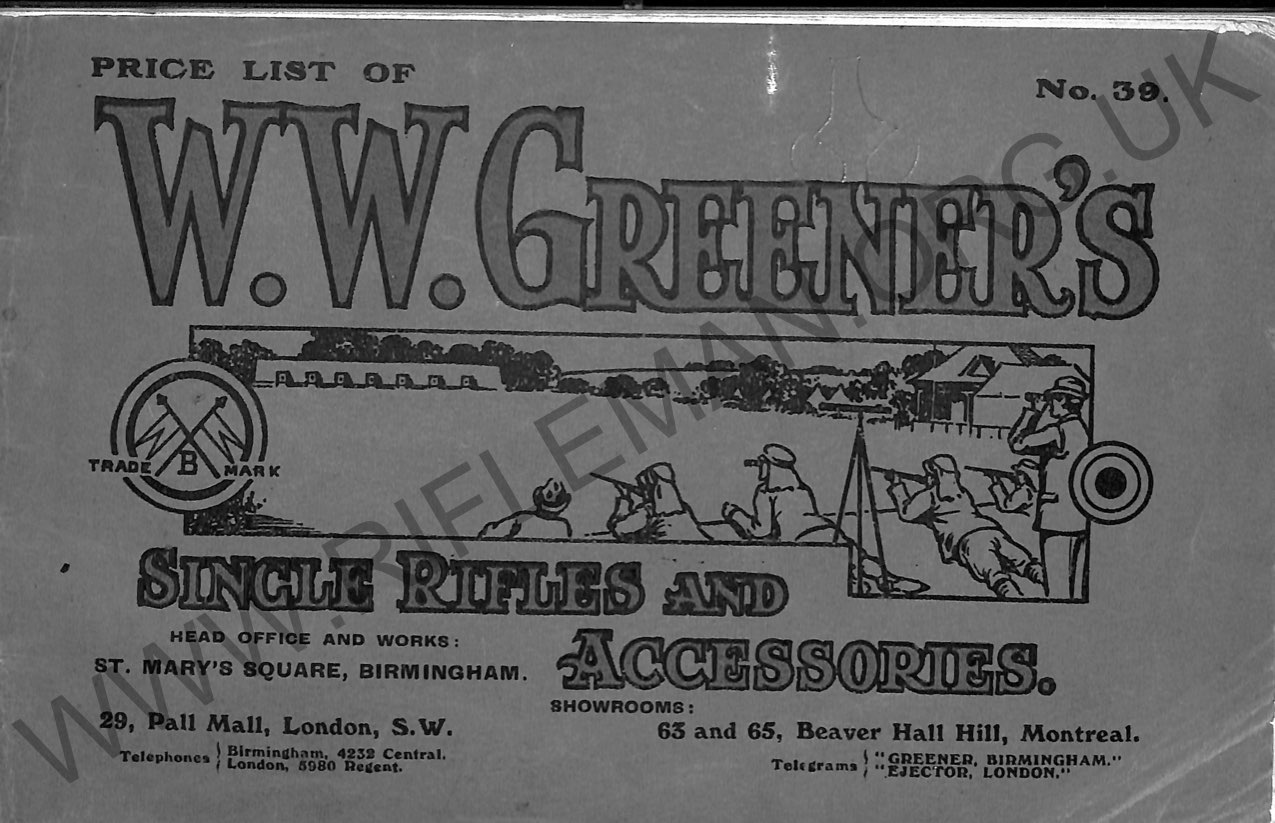 For more on W.W. Greener, see Greener on Ammunition and the Greener "Queen's Cup" Martini Rifle, plus Greener's Fencing Musket and other Greener's Martini target rifles