This optical sighting system was designed by Parker-Hale for fitment to practically any sporting rifle of the day.

Advertised from the early 1920s until shortly before the Second World War,

it provided an economical means to improve the sighting of small game with rimfire small-bore rifles.

of any rifle that had no other obstructing foresight in place.

A rear-sight clearing or correcting lens could be fitted in place of most of the contemporary rear aperture eyepieces.

At a time when an imported basic Winchester telescopic sight cost about £8 with its mounts,

the "Universal" set cost little more than £1 with your chosen lens type.

The 1925 A.G. Parker advertisement for the Universal Optical Sight Set is shown below.

As can be seen, the sight system also accommodated target shooters,

but one needs to be reminded that such an optical sight set-up would not have been eligible for most target shooting at that time.

with such as the aforementioned Winchester, or the similar contemporary the Stephens No 368 telescopic sight,

each respectively with 5 and 6 times magnification, leaving the Parker-Hale "Universal" sights completely outclassed.

Parker-Hale had also, in 1933, introduced their own telescopic sight, the P-H "Targetscope", modelled on the American Fecker product.

Marketed both by A.G. Parker and Parker-Hale, the Universal Optics were realistically only for use in the field.

Ten years after the above advertisement, in 1935, the Universal sight was relaunched in an "improved" version;

but as conflict loomed in Europe in the ensuing years, production shifted to more important weapon ancillaries,

and the Universal wa not reintroduced post-war.

had been experienceing difficultie in accuracy probably related to incorrect fitmen to their rifle.

In bold lettering, prominently centred in the page, was the text

' We cannot point out too clearly that an Optical Sight cannot be "stuck on",

it must not be capable of sideways movement, and must therefore be "fitted".

The lens must be just right, and must therefore be "selected".

after carefully reading these remarks, unless you prefer to send us your rifle.

This was an effective admission, apparently not mentioned prior to 1935,

that the sights could not easily be added to the rifle and removed on a frequent or "as needed" basis.

In fact they were both less versatile and effective than a properly mounted 'scope,

which could be removed and re-fitted at will without altering the rifle's zero.

Additionally, the choice of lens was critical. 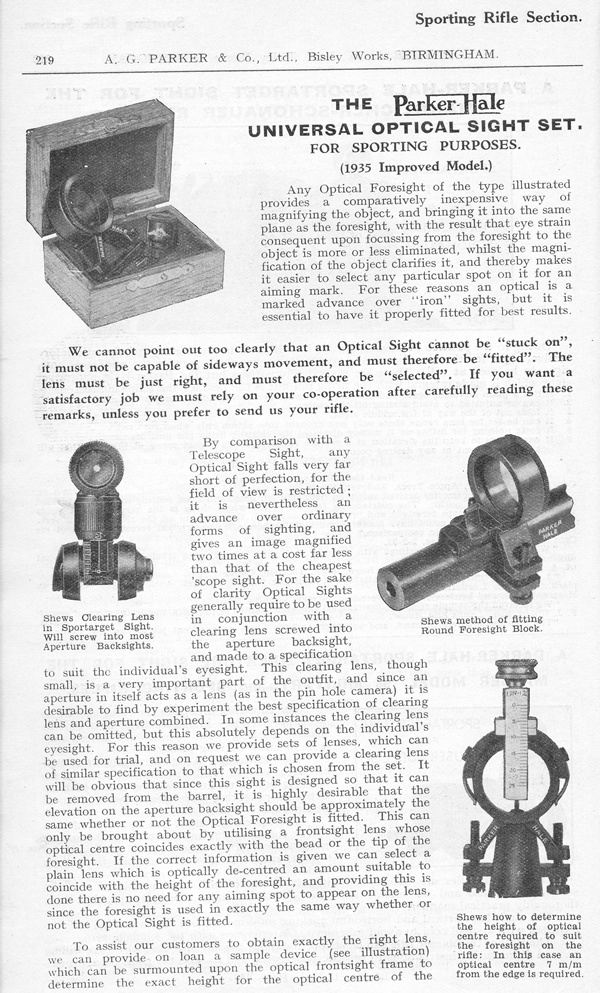 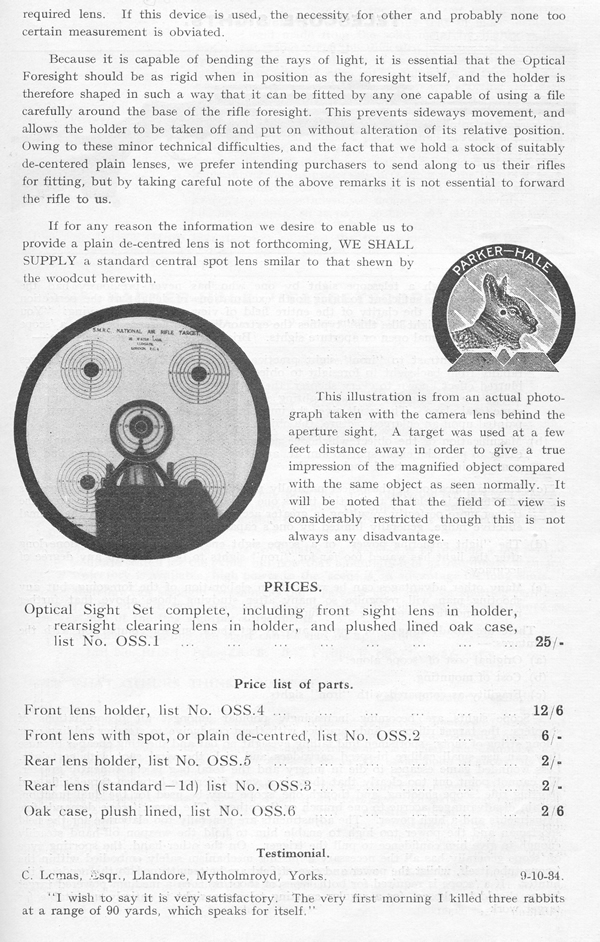 The Universal Optical system, at first glance, appeared to offer a cheap

and practical alternative to a telescopic sight, but the truth was somewhat different;

leading to most of them languishing unused and undiscovered for many years in their dust-covered boxes.