Just two years into the 1939-45 War, Britain was suffering a serious shortage of suitable training rifles. With all local manufacturers committed to the far higher priority of Service arms production, there were simply not enough small calibre rifles to go round. Local Defence Volunteer units ( latterly Home Guard) were utilising almost anything on which they could lay their hands, and such small-bore rifles as were in stock with gunsmiths or manufacturers were taken over by the War Office for distribution anywhere thay might be of value for economical trainig purposes.

The U.S.A. were already supplying much miltary matériel, and a request was made for a consignment of .22 rimfire rifles suitable for the purpose. The Mossberg Model 42 rifle was a sporting/target based design which offered an excellent basis on which minor modifications could comparatively easily be made to current production lines; the substitution of the three-quarter length stock with a full-length military style stock being the most significant and obvious.

The initial contract, in June 1941, was for 10,000 rifles. Previous to this date, Mossberg had used only a letter code on their production rather than serial numbers. Arranging to add the serial numbers required by the British Government took time, and the first 2,500 rifles left the factory not so marked. Thus the latter three-quarters of that contract ran from serial number 2501 to 10,000, and no earlier numbering should be seen. There was, not surprisingly, a delay in the despatch of this early batch due to the numbering requirement.

There were further contracts for rifles over the next eighteen months; a batch of 8,000 later in 1941, another 20,000 in March 1942, spares in June, and two more batches of rifles, totalling 8,000, early in 1943. Precise numbers allotted between U.S. and British destinations are not known at this point, but most production came to the United Kingdom.

Incidentally, the "M" in the rifle's nomenclature is reputed to be for "Mannlicher", being the style of stocking used, with the pistol-grip wrist.

The Parker-Hale post-war advertisement quotes the 42M rifle as having a barrel length of 23 inches, and a weight of 6 lbs. 12 ozs.

The magazine had a 7-round capacity, and a spare magazine was sometimes to be found in a compartment in the butt, accessed via a butt-trap.

The magazine's latch release is at the rear of the base plate, and a knurled knob,

an unusual fitment for the adjustment of the follower's spring pressure,is at the front.

The fore-sights on the British contract rifles were also tunnelled, but that tunnel was slightly shorter and on a shorter ramp.

The sight itself was not at all dissimilar to that fitted on the Ross nearly thirty years earlier.

The small pull/push ring at the right-hand-side of the pressed steel ramp permits lateral adjustment of the integral blade element.

These rifles were originally only fitted with a barrel mounted tangent rear-sight, shown below.

However, the British early contract rifles had the Mossberg S102 receiver mounted aperture sight added to emulate the rear-sight of the Lee-Enfield No.4 Rifle.

It has to be said that the Mossberg was a very light-weight representation of the No.4 rifle, and far less realistic than other training rifles of its era -

- the best of which were simply small-bore versions of the parent service rifle, such as the SMLE No.2 MkIV* and the later No.7 Rifle -

- but, at that time, it was a case of "needs must when the Devil drives".

The rear sights shown in the Parker-Hale advertisement above are those S 102 models fitted to the rifles for the U.S. home market, as illustrated below.

The safety-catch lever below the bolt-way is in the firing position, indicated by its location above the red "F" lettered stud.

The safe position would be with the catch lever slid to the right, above the green stud lettered "S".

The rear aperture sight used by Mossberg was acknowledged to be rather fragile, it not having been designed for service-style use.

Many were damaged, and Parker-Hale modified one of their "Sportarget" rear-sights with a bracket to fit the left-hand side of the Mossberg receiver.

These sights were fitted, post-war, to many of those rifles which escaped return to the U.S.A. under the Lend-Lease contract terms.

Such rifles are easily identified by the stampings "UNITED STATES PROPERTY " on both the barrel and the receiver.

The No. 42 M.B. Mossberg rifles imported from U.S.A. in large numbers during the war for preliminary training are notoriously weak in their sighting equipment, so to meet the demand for more serviceable sights, we offer :—

This rifle is worthy of good sighting equipment, so we have adapted our Receiver type Sportarget aperture backsight to replace the original frail and unsatisfactory aperture backsight provided by the makers.
The Sportarget sight has clear scales for vertical and lateral adjustments with distinct clicks for each half minute. A half minute click makes a movement on the target of 1/8th of an inch on a 25 yards range, which is fine enough for the most expert rifleman. It is supplied with two screws to fit existing screw holes.
List No. PH.16D with single hole eyepiece Price 43/–
Ditto. with midget six hole eyepiece Price 50/–

The sling-swivel arrangements are unusual when compared with most British small-bore training or target rifles.

The round stud, in which the swivel loop rotates, has a key under, which locates in the keyed slot in both the forward "barrel band"

(which band does not actually encompass the barrel), locking into place with a 90 degree twist.

An interesting feature is the use of cross-head "Phillips" type screws to mount the fittings,

Whilst Thompson patented the Phillips screw in 1932, their use in the firearms trade is unusual to this day,

and their inclusion in the specification of the Mossberg training rifles must have been amongst the earliest.

The steel butt-plate of the 42M-B has already been illustrated, but here on the left is the plastic fitting of the 42 MB (a),

being similarly used on the Model 46 MB, and to the right a further image of the 42M-B's sight line.

The rifles have two bedding bolts, one through the trigger-guard in front of the magazine, and the other just behind the nose of the fore-end wood.

As already mentioned, in 1941 Mossberg received the first government contract for this .22 rimfire calibre training rifle.

* This particular contract was held in abeyance for the commencement of serial numbering of the rifles.

During the 1943 contracts, a number of rifles with a modified extractor had their 42M-B markings suffixed with an "a". Additionally, the 42 MB(a) example to which we have access no longer has the steel butt-plate with the trap for the spare magazine. A moulded composite has replaced the steel fitment of the 42M-B, and the spare magazine trap has been deleted from the specification.

The barrel of this modified rifle is stamped with the serial no., and the familiar "UNITED STATES PROPERTY", above the sling swivel band,

Mid-barrel is the company stamp with the rifle reference "42 MB (a)",

and on the front of the action is repeated "UNITED STATES PROPERTY" and the serial no.

As we cover three rifles models on this page, we show a comparison image of their respective bolts.

The middle bolt has had the dust-cover removed in the past.

Below are close-up shots of the bolt-head faces to illustrate the differences in extractors, firing-pins,

and the cut-outs in the latter two, presumed to be gas vents in case of split cartridge-cases on firing.

The dust covers would therefore be added protection for the firer in such an event,

and are probably best left in place, although some shooters removed them, considering them to be obstructive when loading.

For reference, we also show each barrel's model identification marks for the three rifles, in the same order.

The parts list and breakdown drawing are shown belown 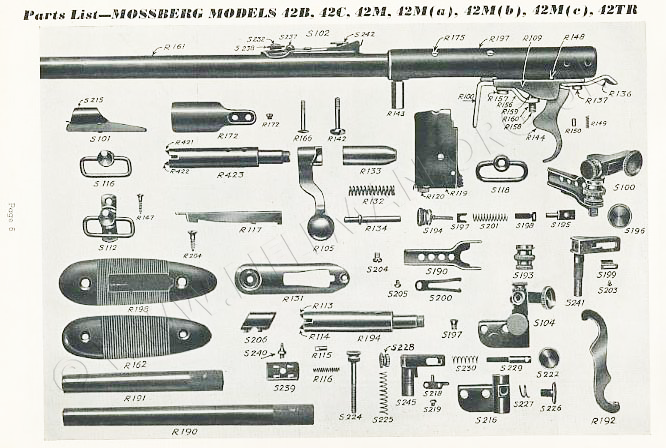 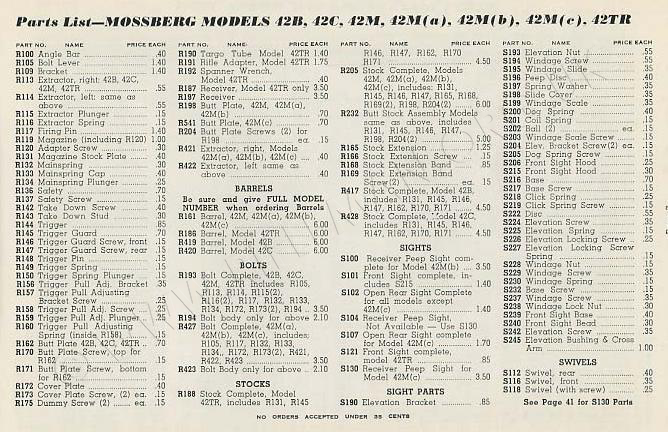 In the Summer of 1954, a British shooting journal passed comment on the Mossberg rifles,

still technically in military use although officially on loan from the U.S. Government. They wrote:

" Possibly the most maligned .22 rifle in Britain is the Mossberg. Many an unladylike word has been uttered by armourers trying to make them shoot accurately.

Imported under lease lend in our hour of need it was indeed a boom and a blessing. Thousands came to us from across the Atlantic and helped Home Guard and others to learn the rudiments of marksmanship. These weapons, by the way, cannot be obtained commercially, they are Government property and are now issued to the present Home Guard and to the several Cadet Corps.

Few rifles, loaded and cocked, will not accidentally fire if banged on the floor. Mr. Driberg, Member of Parliament for Maldon, Essex, was assured by the Parliamentary Secretary to the Ministry of Defence in the House of Commons recently, that the accident was the result of a breach of range discipline and that in future firearms issued to the Sea Cadet Corps will be inspected by competent armourers at frequent intervals.
The foregoing remarks are made with reservations because it is understood that the Mossberg rifle in its present form is most effective, accurate and safe."

For the obviously stated reason, none of these rifle were then in civilian hands, but the spreading of such Lend-lease equipment widely around the country, to Home Guard and Cadet units, does explain why so many rifles marked "U.S. PROPERTY" found their way into associated civilian rifle clubs, and subsequently into private hands. Many were indeed returned to the United States, and there factory refurbished, but not all of them by any means.

This is a 4 ounces heavier rifle than the 42M models, now being 6 lbs. 14 ozs., and is fed by a tube magazine in the fore-end rather than by the removable clip box magazine in the 42M.

The cap for the spring-loaded feed-rod of the tube magazine can be seen on the nose of the fore-end.

The Mannlicher style of stocking has been retained from the 42M-B, in fact it has been reported that the wood furniture may have been unused wartime stock,

although the trigger-guard, a plastic moulding that incorporates the shaped finger-grooves in the pistol-grip, and which previously ran right to the bottom of the woodwork,

now stops with a radiussed end about a quarter-inch short of the base of the pistol-grip.

The butt-plate is now still a plastic moulding, without the spare magazine storage trap of the early 42M-B.

On the underside of the fore-end and butt-stock are the keyed slots for sling-swivels.

Apart from previously covered aspects, little is different on the Model 46 from the models 42.

The barrel-mounted rear-sight, just ahead of the action is, though, very different.

As is the plain fore-sight ramped block with a plain blade dovetailed for windage zeroing adjustment.