the S.M.L.E. Rifle, the Lewis Machine Gun, and the Thompson sub-machine gun.

Held in the National Firearms Collection at the Leeds Royal Armouries

and originally part of the Enfield Pattern Room Collection

This unusual adaptation of a No.1 Mk.III rifle has been experimentally fitted with a set of folding sights

specifically intended for anti-aircraft use.

Built up by the Birmingham Small Arms Company on a 1916 " SHT LE " (Short Lee-Enfield) Rifle,

it was trialled during Spring that year.

The front sighting element is shown, above, raised (but without the windage arm extended), and folded flat, below.

but the front volley sight dial and arm was never fitted.

The large rear aperture also folds neatly down against the stock above the magazine. 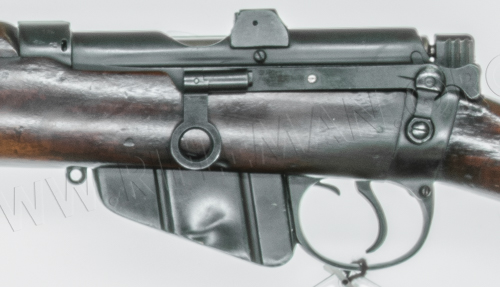 The rifle, viewed from the right-hand-side, with both sights raised.

Left below: the front sight raised with the windage arm yet to be deployed.

Centre: windage, or 'lead' arm extended, viewed from the rear.

Right: viewed from the muzzle. 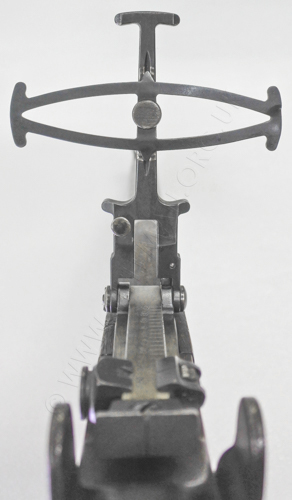 The design was configured for an approximate range of 1,000 yards,

and for an aircraft travelling in the region of 110 knots.

if the target was moving directly across the line of fire,

with an appropriate adjustment for other angles of approach or departure. 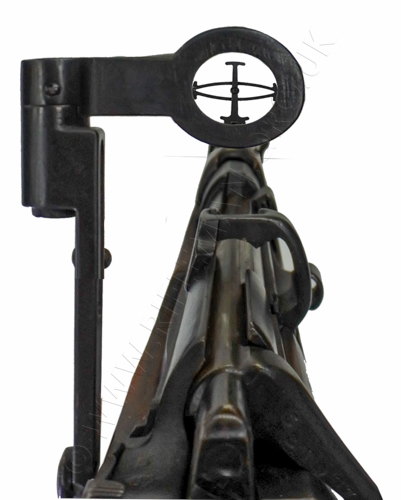 The rifle's action, initially stamped up as a Mk. III *, has had the "*" barred out,

effectively returning it to just a Mk.III. The cut-off has been retained. 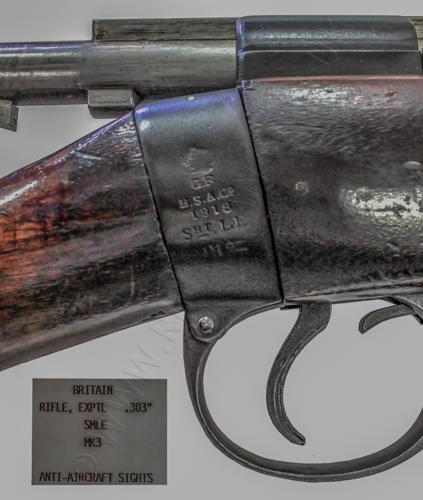 A combination of a lack of robustness, problematic operation, and probably likely effectiveness,

Nor was the rifle seen in the trenches, where it may have been of alternative use.

the S.M.L.E. Rifle, the Lewis Machine Gun, and the Thompson sub-machine gun.